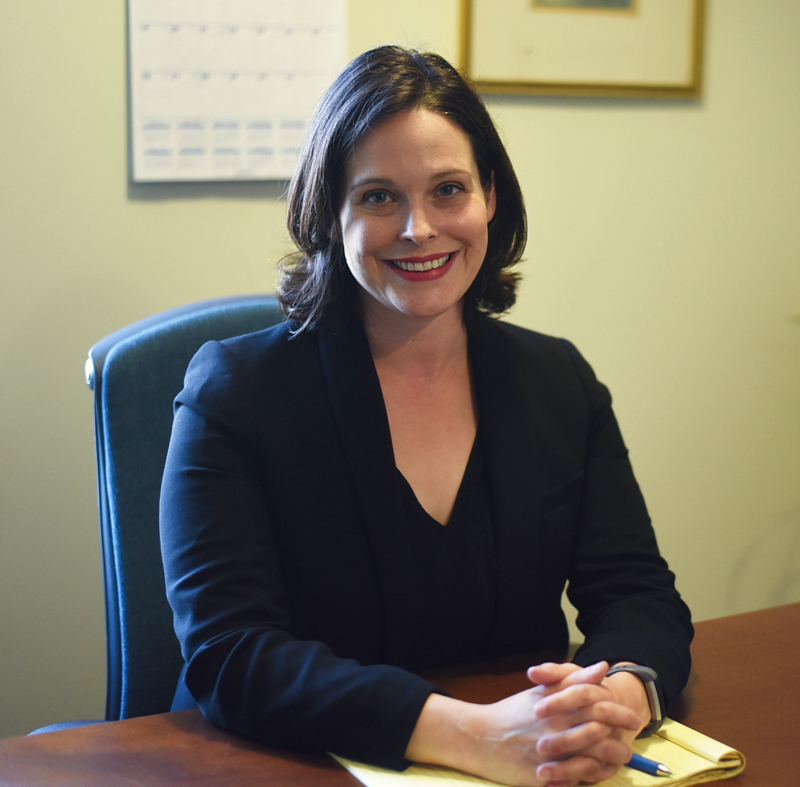 Democratic candidate for district attorney Natasha Irving, of Waldoboro, believes community-based restorative justice needs to be a priority in the district.

Irving grew up in Waldoboro and still lives in the town with her partner, daughter, and stepdaughter. She is a graduate of Loyola University in New Orleans and the University of Maine School of Law.

Irving, a defense attorney, opened her own law office in Waldoboro in 2014. She is a member of the Waldoboro Board of Appeals.

“I find those court-appointed cases really fulfilling. I had always wanted to be a defense attorney and fight for folks’ civil rights,” she said. “In all of the work that I do, the criminal has tended to be where most of my passion is, and the civil commitments.”

“What I found since I started practicing is that the system is flawed,” Irving said. “I don’t want to work within a flawed system if I can help fix it. So that’s why I decided to run for district attorney.”

According to Irving, if elected, she would be the first woman and the first Democrat elected to the District 6 position since it was established in 1972.

Irving is especially interested in the use of community-based restorative justice in the district.

“I want to implement a system of community-based restorative justice for nonviolent misdemeanor offenses. Community-based restorative justice, it holds the offender accountable, makes the victim whole, keeps our community safe, and it costs less in taxpayer dollars than the system we are using now, which is ‘lock em’ up.’ Lock them up for any nonviolent offense that we can get jail time for,” she said.

Irving said she believes some jail sentences, which cost taxpayers money, only teach offenders to be better criminals, rather than addressing the root cause of their behavior, such as mental illness, substance abuse, and trauma.

The offender has to listen to the harm they caused the person that they stole from, pay restitution, give back to the community, and get any other help they need, such as counseling, according to Irving.

The program costs about $1,600 per offender to implement, has a 95 percent rate of victims reporting that they felt that the harm had been alleviated, and most of the participants do not reoffend within the next three years, Irving said.

In contrast, Irving gave the example of a man she represented in Knox County who was sentenced to 2 1/2 years in jail for shoplifting.

“That would be an expense to the taxpayers of about $135,000 just for his prison sentence, and he is away from his family for 2 1/2 years, his family is evicted from housing, they have lost their breadwinner, they are now needing state services, and when he gets out he is going to be just as bad as when he went in, if not worse,” she said.

Irving said one issue she has with the current district attorney’s office is that it spends a lot of time and resources prosecuting nonviolent misdemeanor offenses, and jailing those offenders, leaving less resources  for violent crimes.

“I would work to get grant money to make sure that those programs can be implemented in every county, and that would be the policy for nonviolent offenses,” she said.

Irving said she would also like to implement “problem-solving courts,” such as a veterans court, a drug court, and a co-occurring disorders court, or court for those with mental illness.

There are currently no problem-solving courts in the district, according to Irving, and the only veterans court in Maine is in Augusta.

The special courts address the root cause of criminal behavior, such as mental illness, drug problems, or trauma from experiencing war.

“Veterans court is an essential step forward to serving our veterans,” Irving said.

Irving said she supports getting offenders treatment for addiction, rather than putting them in jail.

“Currently the cash bail system that we use really doesn’t address public safety. Asking for arbitrary cash bail punishes hardworking
Mainers,” she said. “How much money you have in your bank account has no correlation with whether you are a public safety threat.”

“The focus really needs to be on making sure that conditions are in place if folks are released from jail – that we are asking for conditions for public safety, we are not asking for an arbitrary cash amount,” she said.

Examples of those conditions could be wearing an ankle monitor, or not having any contact with the victim of a crime.

“If I work my tail off, I can win, and I can make the lives of folks in the Midcoast better,” Irving said. “Victims can be made whole, and offenders can really be held accountable and can turn their behavior around. It’s a no-brainer. Somebody just has to stand up and say, ‘I’m going to do it.’”