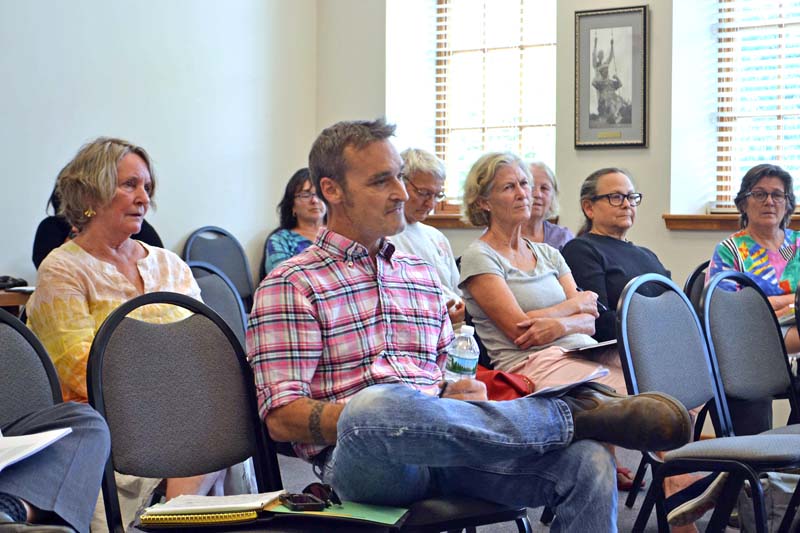 Gabe Shadis (center) addresses the Damariscotta Board of Appeals on Tuesday, Sept. 26 about his appeal of the Damariscotta Planning Board’s approval of Stepping Stone Housing Inc.’s plans for the former Blue Haven property. (Maia Zewert photo)

The Damariscotta Board of Appeals voted 4-1 on Tuesday, Sept. 26 to remand Stepping Stone Housing Inc.’s application for construction at the former Blue Haven property back to the planning board.

The planning board’s March 6 approval of the nonprofit’s project, which calls for the replacement of five existing buildings with five new one-story, two-bedroom units of no more than 720 square feet each on the former Blue Haven property, is now “in suspension” until the board resolves the matter, Town Planner Tony Dater said after the meeting.

The appeal was filed by Gabe Shadis, an abutter to the Stepping Stone property at the corner of Hodgdon and Pleasant streets, and signed by neighborhood residents and property owners Brooke Cotter, Amy Lalime, Patricia Shadis, and Jessica Sirois.

The number of units on the property constitutes a legal, non-conforming use, according to Dater. This means the number of units does not comply with the town’s current regulations, but because the units were in existence prior to the adoption of those regulations, the use is “grandfathered” and can continue to exist. Grandfathering also applies to the replacement of existing units.

After receiving an opinion from town attorney Jenny Villeneuve, the planning board voted 3-2 in September 2016 that the seven replacement units Stepping Stone was then proposing would be grandfathered.

Stepping Stone Housing Inc. will return to the planning board for additional findings of fact related only to this specific portion of the organization’s site plan review application, Dater said. The board of appeals’ decision does not reopen the entire application for discussion.

It will be up to the applicant to prove that at least three of the six dwellings currently on the property were not abandoned for over a year, Dater said.

Due to public notice requirements, Dater said it is too late to add Stepping Stone to the planning board’s October meeting agenda. He will reach out to Stepping Stone to see if the organization “will be ready to provide evidence” at the board’s November meeting.

“As the town attorney said, the burden is on Stepping Stone as the applicant to prove that the buildings had not been abandoned, but given the experience at previous meetings, we could hear a lot from the neighbors if the planning board chooses,” Dater said.

While the return date to the planning board is unclear, Stepping Stone may press forward with the construction of three units on the property for which it holds building permits, Dater said.