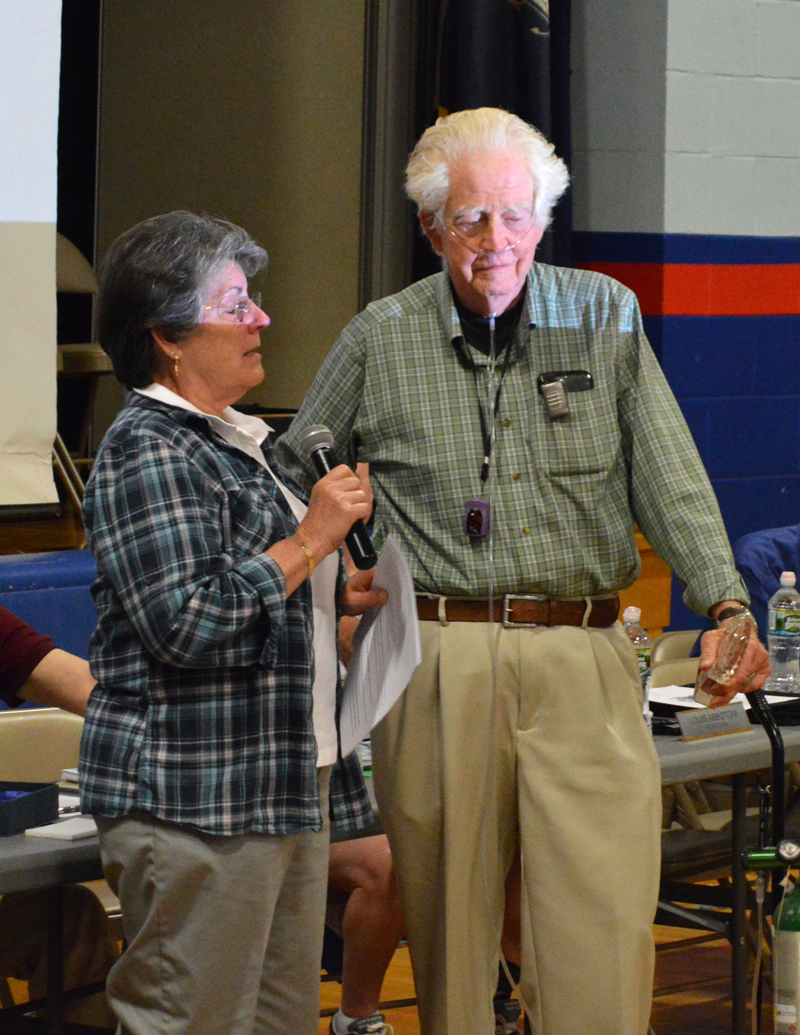 Damariscotta voters approved all 44 articles on the warrant for annual town meeting by a wide margin, including a 4.2% increase in municipal spending and a new subdivision ordinance.

There was minimal public discussion during the 1 1/2-hour town meeting in the Great Salt Bay Community School cafeteria on Wednesday, June 12.

Town Manager Matt Lutkus started off the meeting with town announcements, including the appointment of Tax Collector Rebecca “Becky” Bartolotta as town clerk, replacing Michelle Cameron. Bartolotta has been serving as interim town clerk for the past month.

Lutkus also announced the hiring of a new tax collector, Heather Dube, to replace Bartolotta. Dube currently works as deputy tax collector for the city of Bath. She will start work at the Damariscotta town office July 1.

Nick Bryant was introduced as the new service chief of the Central Lincoln County Ambulance Service as well.

Robin Mayer, chair of the board of selectmen, announced the dedication of the annual town report to the late Theodore “Ted” Clapp, who served on the Damariscotta Budget Committee and Riverfront Park Committee and was president of the Skidompha Library Board of Directors.

“He was very, very active in keeping our town and making our town such a great place to live. He’s fondly remembered by me and, I know, a lot of folks that live in town for all of the contributions he made to Damariscotta,” Mayer said.

Mayer then presented Damariscotta’s sixth annual Spirit of America Award to Robert “Haas” Tobey for his work on various town committees and his commitment to environmental preservation over the nine years he has made a permanent home in Damariscotta.

“The town is truly indebted to Haas’ continual volunteer service across a wide spectrum … through his committee work, through his board work, and individually,” Mayer said.

Tobey was joined up front by several members of his extended family, some of whom traveled from Chicago to celebrate with him.

Tobey then gave an impassioned acknowledgment of the commitment of Damariscotta Fire Chief John Roberts and the town’s volunteer fire department.

“The volunteer firemen meet every Tuesday night … and they’re training for something they hope they’ll never have to do. So if I need inspiration, I think about their dedication and their commitment to this town and its safety,” Tobey said.

Mayer then announced the departure of Selectman Ronn Orenstein after nine years on the board.

Voters approved increases in contributions to the CLC Ambulance Service and Skidompha Library without any discussion.

CLC Ambulance was approved for $31,000 from Damariscotta for 2019, an increase of $25,384 or 451.99% over last year’s budget. Representatives of the ambulance service attribute the higher request to a decrease in revenue from nonemergency patient transports, such as those between the hospital and Cove’s Edge.

Lutkus said the town is mandated to pay the full amount.

In Article 18 of the warrant, the selectmen recommended a total of $4,250 for community services and the budget committee recommended $1,750. The difference of $2,500 reflects a split on whether to partially fund the Independence Day fireworks display.

After some explanation from Lutkus, voters approved the higher amount.

The fire department’s budget was approved at $119,340.44, an increase of $7,633.44 or 6.83%. Part of the increase is due to the relocation of workers’ compensation insurance from the administration budget.

A majority of the increase in administration stems from the payroll portion of that budget, which totals $231,908.80, an increase of $18,983.80 or 8.91%. The positions of town manager, town clerk, treasurer, and tax collector all saw increases.

Prior to the budget voting, Damariscotta residents approved the selectmen’s nomination of Patti Whitten as cemetery trustee for another three-year term.

Mary Trescot, Richard McLean, and Shari Sage were elected for three-year terms on the budget committee.

Bruce Rockwood volunteered to serve a three-year term as an alternate member of the budget committee. Rockwood also chairs the town’s land use committee and sits on the board of appeals.

Voters approved amendments to the town’s land use and site plan review ordinances, a new subdivision ordinance, and a correction of a minor error in the shoreland zoning ordinance, after some brief explanations from Town Planner Bob Faunce.

The land use ordinance was reformatted and the maximum number of units allowed in a multiple-family home was increased from 10 to 32. This change is intended to ease the development of senior care centers and retirement homes.

The main change to the site plan review ordinance is the addition of an appendix that outlines the composition of a model site plan to better illustrate the concept.

The subdivision ordinance had not been updated in over 30 years and needed to be completely replaced, according to Faunce.

The new ordinance includes the addition of about 20 state-mandated criteria. The biggest change is an allowance for “open plan” subdivisions. The option would reduce requirements for lot sizes, setbacks, and frontage.

Faunce said this would significantly reduce development costs and allow for more green space in subdivisions.