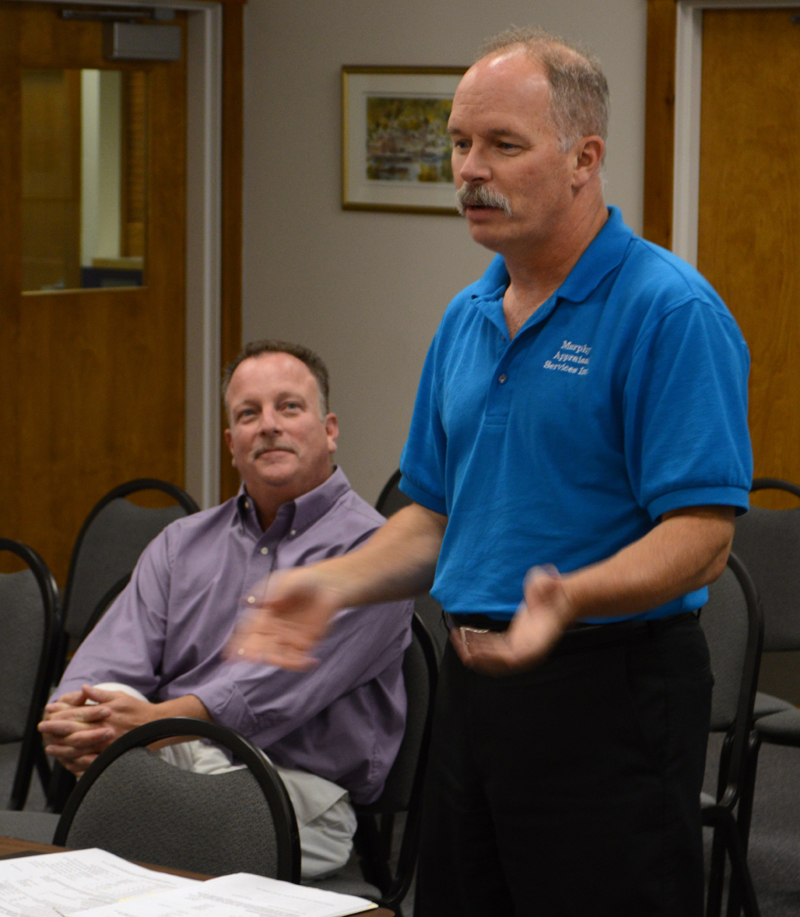 Brothers Matt (left) and Jim Murphy, of Murphy Appraisal Services Inc., meet with the Damariscotta Board of Selectmen on Aug. 21. The town recently contracted the firm to provide assessing services. (Evan Houk photo)

The Damariscotta Board of Selectmen set the rate Wednesday, Aug. 21.

The rate will give the town an overlay of about $161,783.80, according to the town’s new assessors’ agent, Jim Murphy. The board plans to transfer $96,000 of this overlay back into its undesignated fund balance to replace the funds approved for use on the Bristol Road sidewalk project at a special town meeting July 10.

The overlay is the amount of taxes the town collects beyond its expenses.  The funds are often used to offset tax abatements, or refunds to overcharged taxpayers.

This will leave the town with what Town Manager Matt Lutkus referred to as a “standard” overlay of $57,000, plus almost $9,000 more.

The selectmen, with Jim Murphy and Lutkus, discussed whether to keep the tax rate the same or lower it. Holding the rate at $16.30 would have given the town an overlay of approximately $231,000.

Lutkus suggested holding the tax rate, using $96,000 to replace the Bristol Road sidewalk funds, and using some of the extra overlay to jump-start funds for paving and other sidewalks. He pointed to the difficulty of funding projects through federal and state grants, like the funds that will cover most of the Bristol Road project.

“The expense and the time involved in (securing the Bristol Road grant) makes me think that we’d be better off funding those types of projects ourselves, without these grants with all the strings attached,” Lutkus said.

Selectman Josh Pinkham disagreed, saying the money for future projects should be set aside in the normal budget process, rather than raised through overlay. He agreed, however, that the selectmen should use part of the overlay to replace the $96,000 transferred for Bristol Road.

Selectman Mark Hagar said that if the town wants to catch up on roads projects, it needs to use a combination of budgeting and overlay.

“You’re never going to raise the amount of money that you’re behind on your paving program,” Hagar said.

The selectmen then met in the middle, voting unanimously to lower the rate to $16.10.

At the start of the assessors’ meeting, Jim Murphy explained various options for the tax rate and his general plan to provide assessing services to the town.

“I bring to the town 30 years experience doing this business and I think that we can offer some opportunities for organizational changes that I think will be beneficial to the board, and to the taxpayers, and to the office staff. … I think there’s some real opportunity for taxpayer involvement,” Murphy said.

He said he is bringing on his brother, Matt Murphy, to share the workload and expand his business, Murphy Appraisal Services Inc.

“I said this might be a good opportunity for Matt and myself, and for Damariscotta, to have somebody start new in the assessing business and have a mentor literally a bridge away every Monday,” said Jim Murphy, who also serves as assessors’ agent in Newcastle. “That’s about as good as it gets. Otherwise, you probably would be spending a lot more and getting a lot less service for an assessors’ agent.”

Jim Murphy said he previously served as the assessors’ agent for Damariscotta about 20 years ago.