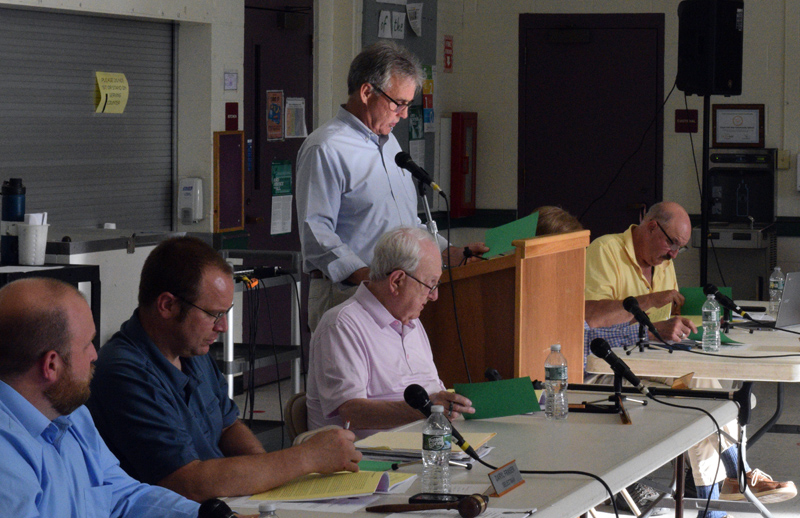 Moderator Jim Cosgrove reads a warrant article during the open portion of Damariscotta’s annual town meeting as the Damariscotta Select Board looks on at Great Salt Bay Community School on Wednesday, June 15. All articles were approved with no discussion and all the referendum articles from annual town meeting were approved at the polls the day before. (Evan Houk photo)

No “formula” businesses will be allowed in downtown Damariscotta after an ordinance amendment banning the chain stores was approved during a hybrid annual town meeting, held Tuesday and Wednesday, June 14 and 15.

The most substantive articles were included in a referendum vote on June 14, to coincide with the state primary. Routine articles were all approved with no discussion by approximately 12 residents during the open portion on June 15 at Great Salt Bay Community School.

The purpose of the amendment is to “address the negative impact of nationwide, standardized businesses on Damariscotta’s historic downtown area,” according to the document.

Voters approve an article at the open portion of Damariscotta’s annual town meeting on Wednesday, June 15. The hybrid meeting included referendum voting the day before, where a ban on formula businesses, charter amendments, and the towns fiscal year 2022-23 budget were all approved. (Evan Houk photo)

“The proliferation of formula businesses will have a negative impact on the community’s economy, historical relevance, and unique character,” according to the amendment.

Voters approved amendments to the town charter to designate the historic preservation review commission as a standing committee, change the name of the board of selectmen to select board to align with state statute, and to increase expenditure authority for the town manager for budgeted purchases and contracts to $15,000.

In June 2021, Gov. Janet Mills signed a law that changes references to “boards of selectmen” in state statute to the gender-neutral term “select boards.”

Voters also approved amendments to the town’s medical marijuana licensing ordinance and the adult use marijuana licensing ordinance, respectively. The amendments include prohibiting more than one of the same type of license at the same establishment and require retail establishments to begin operation within 60 days of receiving a license and to be fully operational within 120 days.

According to the budget letter written by former Town Manager Matt Lutkus, 33.1% of the property tax revenue will go towards funding town services, 57.7% pays for the primary and secondary education budgets, and 9.2% covers Damariscotta’s share of the Lincoln County tax assessment.

Voters approved the creation of a new capital reserve account for broadband for the purpose of setting aside funding that becomes available for broadband-related services and facilities.