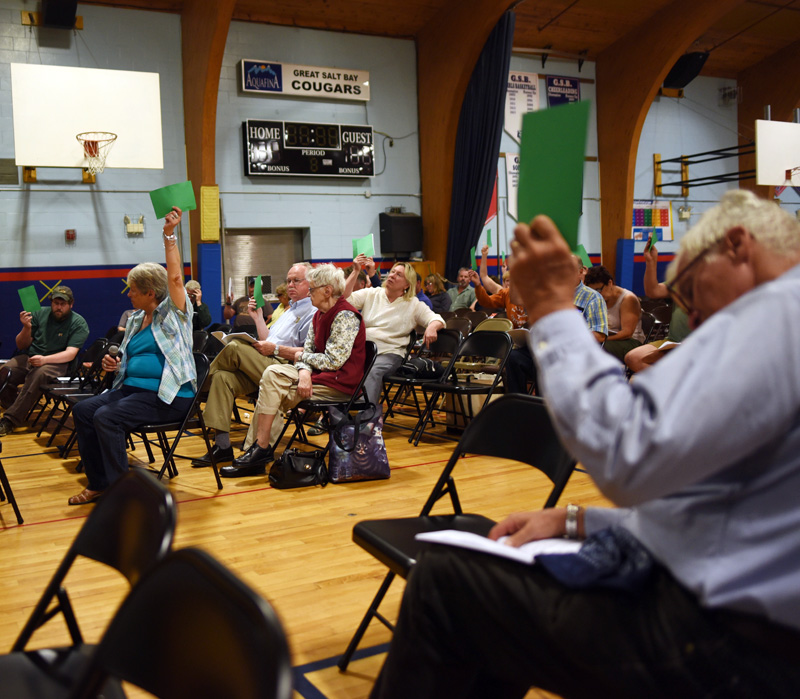 Damariscotta residents approved a land transfer for a fire training facility and rejected an attempt to restrict the use of electronic signs in the C2 district during the annual town meeting Wednesday, June 13.

The former vote will allow the Damariscotta Board of Selectmen to enter into an agreement with the Lincoln County Fire Chiefs Association for the sale of town-owned land for a fire and emergency services training facility.

The land is adjacent to the Damariscotta Fire Department at 27 Massasoit Drive.

According to Jefferson Fire Chief and Lincoln County Fire Chiefs Association President Walter Morris, the association would like the new site to have a three- to four-story burn building and a classroom. A training trailer would also be moved to the new facility.

The plan will need to go through a site plan review with the Damariscotta Planning Board before construction can begin.

The only articles voters did not approve were three articles resulting from citizen’s petitions submitted by planning board member Shari Sage.

If approved, the articles would have amended the 2016 sign ordinance to ban new open-faced electronic signs from the C2 district, which runs roughly from the Damariscotta Baptist Church to the intersection of Main Street and Route 1, and also includes parts of Biscay Road and Center Street.

It would also have required existing signs to be turned off between 11 p.m. and 7 a.m.

There was quite a bit of discussion about the proposed amendments, with Bruce Bachelder calling the articles a “solution looking for a problem.”

Voters approved amendments to the site plan review ordinance after much discussion.

The Damariscotta Land Use Advisory Committee has been reviewing the language of the 56-page ordinance since January, and will continue working on the document during the summer.

One of the changes would clarify procedures on multiple-phase proposals and require the submission of a fully conforming site plan before an applicant may request waivers. If an applicant proposes a second plan with waivers, they would need to explain the need for the waivers in writing.

Another change increases the number of days the planning board has to inform an applicant of a decision in writing from seven to 15, or 30 by mutual consent.

Planning board Vice Chair Wilder Hunt, who has opposed the changes since they were presented to the board April 2, said the changes “seem innocent enough” but are actually “a mess.”

The vote to approve the amendments was 32-28. 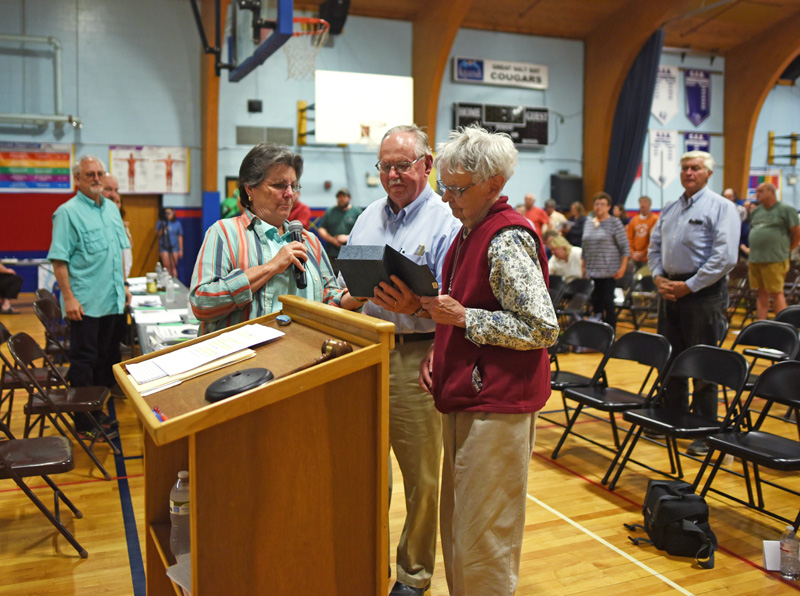 A separate article, asking if the town should raise an amount not exceeding $25,900 for the purpose of increasing the hours of and adding benefits to the code enforcement officer’s position, was also approved.

The amount is in addition to the overall budget, and increases the original budget recommendation of 12 hours per week with no benefits to no more than 20 hours per week with benefits. The total not-to-exceed cost of $41,500 would be for a full-time, benefited position that would be shared with one or more towns in Lincoln County.

Damariscotta resident Amy Lalime voiced concern about the change, wondering if the town would have to pay the full cost of a full-time code enforcement officer if another town decides against the arrangement.

Board of selectmen Chair Robin Mayer said that if the town does not have a partner for the arrangement, the article would be moot.

Another vote authorized the selectmen to expend funds from the “Beck Buyout Fund,” which has a balance of $18,000, for increases in the compensation plan for police officers as a result of collective bargaining. The money will be transferred into the police department’s 2018-2019 budget.

The fire department’s request of $117,900 from the capital reserve fund to cover the remainder of the cost for a new truck was also approved.

The department ordered the truck in November 2017 and it will be finished this fall, according to Damariscotta Fire Chief John Roberts.

Voters also approved the $4,250 recommended by the selectmen for community services.

The Damariscotta Budget Committee had recommended the lesser amount of $1,750, having cut out the cost for fireworks.

At the beginning of the meeting, it was announced that the annual report was dedicated to Calvin and Marjorie Dodge, and that they were also receiving this year’s Spirit of America Award.

“They have a rich history here in town,” Mayer said when presenting the award.