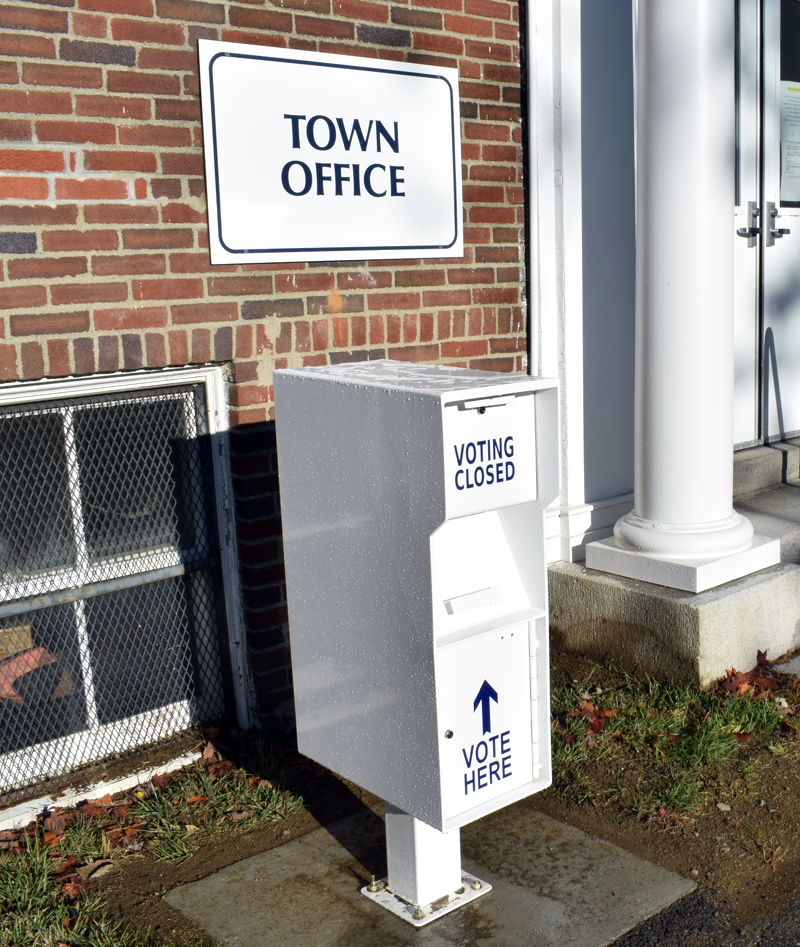 A new secure ballot box is in place at the Damariscotta town office. Voters can drop off their ballots anytime before the polls close on Election Day. (Evan Houk photo)

After a public hearing with no comment, the Damariscotta Board of Selectmen approved the town’s second and final — for now — medical cannabis storefront Wednesday, Oct. 7.

The owners of Above and Beyond, father and daughter Charles and Danielle Simmons, of Bremen, are considering holding a soft opening beginning Friday, Oct. 16 if the store is ready.

She said that once the shop is stocked with more product, Above and Beyond will be ready for a full-scale opening.

Above and Beyond will become the second and final medical storefront in Damariscotta, joining Greenport Cannabis Co. If one closes, another could open with town approval.

The selectmen appointed three members and one alternate to the town’s new historic preservation review commission.

The selectmen appointed Bruce Rockwood for a three-year term, Eleanor Myles for a two-year term, and Susan Murphy for a one-year term. Rockwood and Myles are Damariscotta residents. Murphy owns Cupacity and the Gilbert E. Gay building in downtown Damariscotta.

The selectmen also appointed David Levesque, a Newcastle resident who has a law practice and owns a building in downtown Damariscotta, to serve as an alternate member.

The selectmen followed Damariscotta Town Manager Matt Lutkus’ recommendation to make the appointments retroactive to July 2020 to align the staggered terms with other board and committee appointments.

The historic preservation ordinance, which voters approved March 3, will not be enforced until a new version is approved, possibly at an open town meeting in December.

The board of selectmen pledged to solicit feedback from the public and amend the ordinance accordingly after critical comments at a public hearing Feb. 5.

The historic preservation ordinance requires property owners to obtain a certificate of appropriateness to alter the exterior of a building in the Main Street historic district, which is on the National Register of Historic Places.

The historic preservation review commission will review and either approve or deny applications for certificates of appropriateness.

The selectmen approved a contract with Crooker Construction LLC, of Topsham, in the amount of $112,515 for drainage improvements and repaving for the fire station’s back parking lot. The work will be performed next spring.

The town received two bids. The other was from Pike Industries Inc., for $121,140. The public works committee reviewed the bids and recommended the bid from Crooker Construction.

According to Lutkus’ notes to the selectmen, the town does not have an engineer’s estimate for the project, but has funds set aside in a capital reserve account to cover the work.

A fire station reserve account has a balance of $162,200, which the town plans to use for the parking lot improvements and eventual replacement of the station’s roof.

“When we went through the bid process, the amount of site work was more expensive than what we originally envisioned, which is why the price is higher,” Fire Chief John Roberts said.

Roberts suggested modifying the project before the work is done in the spring, if the cost would be the same, to reroute the parking lot to the opposite side of the fire station.

Roberts said that if the cost is higher, he would not be in favor of modifying the project.

“Essentially what it would do is move the driveway to the other side of the building,” Lutkus said.

He said the project could be modified with a change order if the work is similar enough to the approved bid from Crooker Construction.

The town will receive a $5,000 grant from the Center for Tech and Civic Life Foundation to help plan a safe and secure election Nov. 3.

The town will use the funds to pay for a secure ballot drop box it has already installed outside town hall, as well as for personal protective equipment and absentee voting equipment or supplies.