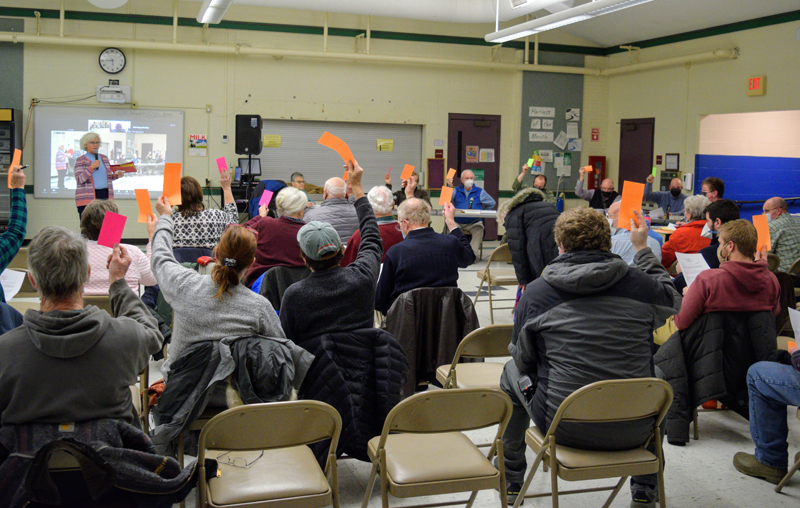 The bond issue is meant to cover repairs on Belvedere Road, Egypt Road, and Church Street, as well as the extension of the Church Street sidewalk from Pleasant Street to Hillside Lane, with an estimated total cost of $2,254,770.

Selectmen brought the bond issue to voters at a special town meeting, rather than the annual town meeting in June, to take advantage of interest rates before they rise.

In the board of selectmen’s meeting following the vote, the board voted to use Bath Savings Bank for the bond issue at an interest rate of 3.399%.

Town Manager Matt Lutkus said that he sent a draft request for proposals to the public works committee a week prior for its review.

The public works committee consists of Lutkus, George Parker, Selectman Lou Abbottoni, and Selectman Josh Pinkham, and typically meets when the town receives bids on a project. The committee reviews the bids and offers a recommended bid for the board of selectmen.

Pinkham disagreed and said that the board should receive the RFP following the committee’s review.

“That’s what we’ve been tasked to do, and if you have a problem with that then… we might as well disband the public works committee,” Pinkham said.

Lutkus said the board has been sent the committee’s minutes and expressed concern with Hagar’s request to see the RFP prior to committee review.

“Mark is an owner of Hagar Enterprises, and what he is asking is to be able to review an RFP that his firm is going to… bid on. I think that’s a definite conflict of interest,” Lutkus said. “I mean, he’s already approved a $2.25 million bond proposal (for work) that, typically, Hagar Enterprises is the only one that bids on.”

Lutkus said that the appropriate way forward for the board would be to vote on the RFP with Hagar’s abstention following a review of the RFP by the public works committee.

Hagar said he already abstains from votes on issues related to Hagar Enterprises; he added that public works committee meetings need to be held in a public forum.

Lutkus said the meetings are held in public and are recorded, but the town does not and will not televise them unless the board wants to pay additional fees to Lincoln County Television.

“We’ve tried to be more transparent and do it with the board of selectmen as a whole, so that’s what we’ve been doing lately. Now, we have this major project; we want to go over everything, which will be recorded, which will be transparent, and… in fact, I have a hard time with this, Mark, because your company is going to be bidding on this major project,” Pinkham said. “So, I question your motives.”

Hagar said he disagreed with Pinkham.

Pinkham said the public works committee will likely set a date for their meeting to review the RFP sometime in the next week.

He said all meetings, save one, were held for bid openings or the annual road survey. All bid openings were recorded, and results were published and sent to the board.

The one meeting that was not recorded regarded problems with the town’s winter snow plow contractor on Feb. 12, 2021. The contractor was Hagar Enterprises. Lutkus said he did not believe the meeting should have been held in a public forum.

The meetings of the public works committee for the annual road survey take place in a crew cab truck, and Lutkus said that inviting the public would introduce a significant logistical challenge.

Lutkus said both Mark Hagar and his son Seth Hagar have asked to be appointed to the public works committee. The town manager did not bring their requests to the board because “they fail the ‘reasonable person test,” being owners of Hagar Enterprises.

“Very candidly, I hope that this is the last time during the next six weeks that this will be brought up as a selectmen’s discussion item. It’s a red herring,” Lutkus said.

Between the funds currently in the town’s possession and the funds the town is set to receive, the town would dedicate $185,179.59 to the repair of Miles Street, the Miles Street causeway, and the Schooner Street culvert.

Any additional ARPA funds the town receives would be allocated to the Miles Street project.

From the remaining ARPA funds, the town will allocate $3,100 for an air purification system for the town hall and police department; a $16,400 donation to Stepping Stone Housing for the installation of a tiny house; $10,000 and $2,500 for staff support of the broadband committee and the expansion of broadband to low-income families; and a $10,000 contribution for the Damariscotta Chamber of Commerce’s renovation and expansion of the information center.

Damariscotta Board of Selectmen will next meet at 5:30 p.m. Wednesday, March 2, at the town office. A livestream and recordings of past meetings are available on the town of Damariscotta YouTube page.