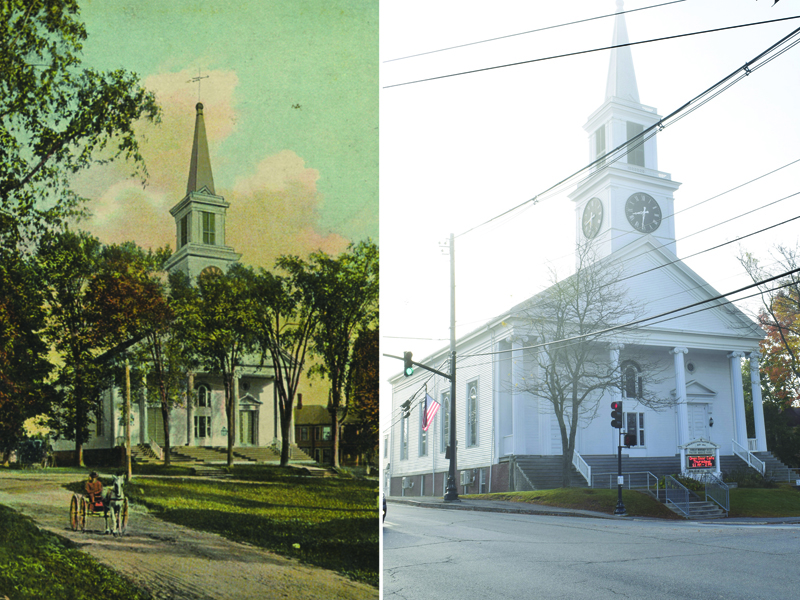 The Damariscotta Baptist Church circa 1910 and on Wednesday, Oct. 16, 2019. The church is celebrating its bicentennial. (Postcard courtesy Marjorie and Calvin Dodge collection/Evan Houk photo)

After 200 years in existence, some things have changed and some have stayed the same at the Damariscotta Baptist Church. Through it all, the church has remained a solid foundation for the surrounding community.

Damariscotta’s first church, founded before the town was incorporated in 1848, grew right alongside the burgeoning community of what would soon become Damariscotta.

Today, the building is a hub of activity, not just on Sunday, but every day of the week, serving as a de facto community center in the center of town.

Pastor Marilee Harris said the available spaces are free for anyone to use, as long as they are not using them for profit.

A 51-year-old addition, the 1968 Christian Education Wing, is home to a restorative justice group; a French class and cafe; the Open Door Cafe that serves free hot soup, snacks, and coffee on Mondays and Thursdays; a Zumba class; contradances; Alcoholics Anonymous meetings; and a Lyme disease support group. People to People, which collects and distributes clothing and other items to people in need, has its headquarters in the basement.

The church opened its doors wide for everyone in the community for an open house in celebration of its bicentennial the morning of Saturday, Oct. 12, during the height of the Damariscotta Pumpkinfest.

Harris was happy with the turnout, saying about a dozen people stopped in.

Visitors could go on a self-guided tour of the church, help themselves to a bottle of water, pull the rope to ring the church bell, and listen to Jay Zoller play the 1846 pipe organ.

American Baptist Churches of Maine will hold its annual conference at the church Oct. 17-19 in honor of its bicentennial.

The keynote speaker will be Christine Pohl, a professor at Asbury Theological Seminary in Kentucky. There will be 130 delegates present from churches all over the state.

Another piece of the bicentennial celebration will be a gathering of former pastors to share memories and celebrate their tenures on the first Sunday in December.

The church now has 52 members.

A historical sketch provided by the church lays out a timeline of events up until the present day.

A small group of churchgoers who lived in the downtown Damariscotta area, what was referred to as “the Bridge” at the time, found it increasingly difficult to make the journey to what was then the Church of Christ in Nobleborough and is now The First Baptist Church of Nobleboro.

Until the completion of the current building in 1846, the original members gathered at the home of William Hopkins on Hopkins Hill, now part of Newcastle, and then in a meeting house built to house the church.

The new church’s first official act was to invite the Rev. Adoniram Judson, of Plymouth, Mass., to be its pastor.

Adoniram Judson’s son, Adoniram Judson Jr., gained notoriety as the first Protestant missionary to travel from North America to Burma and for his ministry’s part in the formation of the American Baptist Missionary Union.

The church began to grow during the 1820s as the community around what would become Damariscotta grew. In the first winter of the Rev. Duncan Dunbar’s tenure as pastor in 1823, “there were conversions and baptisms in every month and on nearly every Sabbath,” according to the church history.

Converts continued to join the church’s ranks throughout the 1830s – even some rough sailors who first came to repent “in jest,” but were actually converted – leading finally to the construction of the church as it is today in 1843.

One important architectural addition to the church has been the intricately designed stained-glass windows that were installed in 1891, along with extensive interior renovations prior to the church’s rededication that year.

Change has come to the Damariscotta Baptist Church, but from all indications, it has not come easy.

There was originally some vocal opposition to the addition of the Christian Education Wing in 1968, the same space that now serves as a community center.

However, after some contentious meetings, the church members, who initially did not want to break with tradition by altering the original building, ultimately realized the need for more Sunday school space, Hupp said.

Harris, the present-day pastor, saw firsthand the type of resistance that custom and tradition can pose.

When she was hired as the first female pastor in the church’s history, there was some resistance. But in time, even the most vocal critics came to accept her as the pastor of the church.

More recent changes for the church were the replacement of the steeple in 2010 and the installation of solar panels on the south side of the sanctuary roof in 2017 that allowed a transition from heating oil to electric heat pumps.

Harris said these energy improvements have secured the church’s energy supply for the next 50 years or so and transitioned it off fossil fuels.

The church’s history points out a quote of particular interest from the Rev. C.V. Hanson that could serve as a mission statement of sorts: “The church has been too individualistic in its appeal … it has been more concerned with the saving of souls (than) the saving of society … the church of the future will make a careful study of the social conditions of the community in which it is located and will organize to combat social evils.”

“Witness the community outreach of the modern church as it seeks to identify and build programs to correct – within its capabilities – many of these social evils,” the church history states.

Harris highlighted this mission when she talked about the outreach the church and other churches in the Twin Villages do for homeless people in the area. She said that every day of the week, one of the churches in town has a free meal available for anyone who wants it.

“We’re not large, but we’re strong,” Harris said of the 200-year-old institution.