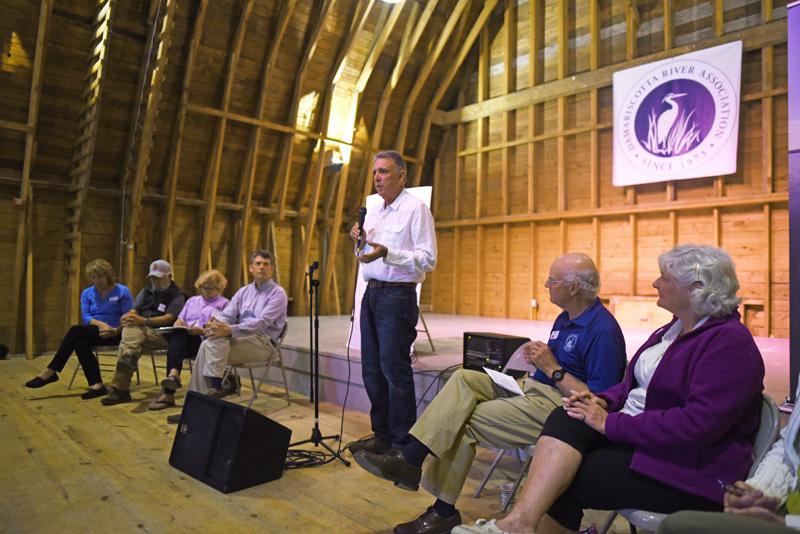 Michael Kane, a member of the Pemaquid Watershed Association Board of Directors, speaks during a meeting about the potential unification of the Damariscotta River Association and PWA at the DRA’s Darrows Barn in Damariscotta on Wednesday, Sept. 12. (Jessica Picard photo)

Members of the Damariscotta River Association and the Pemaquid Watershed Association will vote on whether to merge the land trusts Tuesday, Sept. 25.

The vote will take place at 5:30 p.m. at Darrows Barn, at the DRA’s Round Top Farm in Damariscotta.

DRA and PWA members expressed support for the unification during an informational meeting at Darrows Barn on Wednesday, Sept. 12.

PWA Board of Directors member Michael Kane started the meeting by explaining how the two organizations began to seriously discuss unification in October 2017.

“We wanted to have deeper efforts into collaboration,” Kane said.

The Damariscotta-based land trusts previously worked together on projects such as Bristol’s Crooked Farm Preserve in the early 2000s. They still co-manage the preserve, according to DRA Executive Director Steven Hufnagel.

The organizations even shared an office in Damariscotta, along with the Damariscotta Lake Watershed Association, years ago. The latter organization has since merged with other area land trusts to become Midcoast Conservancy.

“We realized that we have two groups that are working on issues of water quality, land conservation, trails, and education,” Hufnagel said in an interview.

A unification committee was formed in October with four representatives of each organization.

From the DRA, Hufnagel and Trustees Carolyn McKeon, Joel Russ, and Joy Vaughan served on the committee. From the PWA, board members Mary Berger, Sandi Day, Jim Hatch, and Kane served. Berger replaced Peter Lawrence when his term on the board ended.

The DRA Board of Trustees and the PWA Board of Directors signed an agreement of intent to unify Aug. 17. The agreement is contingent upon the vote of the members Sept. 25.

“Our goal is to do more and better watershed and water quality protection,” Hufnagel said in an interview.

“I think to a large extent, we are right on track,” Russ said at the meeting. “I think we have created a model for small nonprofit organizations going forward.”

The series of meetings between the organizations has built trust, Russ said.

If members approve the merger, the boards will be unified by February, Russ said. The organizations’ boards and staff will be combined into one organization.

The DRA has six full-time employees and two or three seasonal education staff. The PWA has two employees, according to Hufnagel, who would be the executive director of the unified organization. 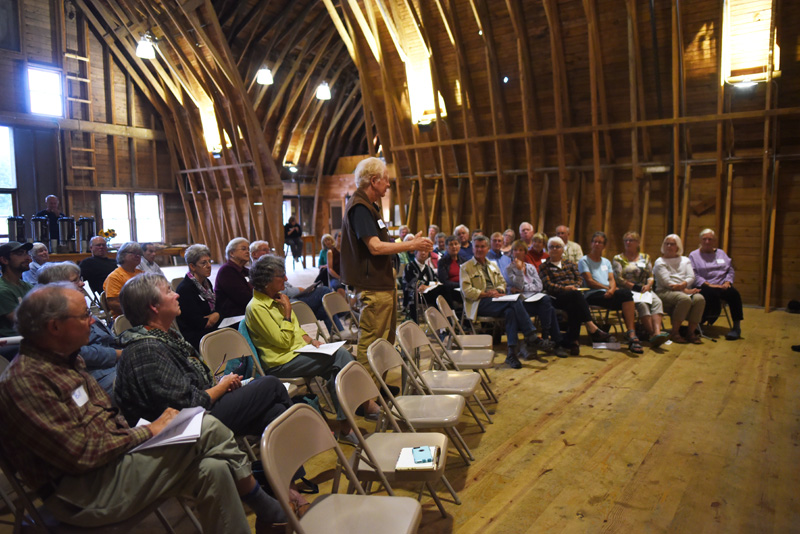 Haas Tobey speaks during a meeting about the potential unification of the Damariscotta River Association and Pemaquid Watershed Association at Darrows Barn in Damariscotta, Wednesday, Sept. 12. (Jessica Picard photo)

The staff of the newly merged organization would move into offices in the farmhouse at Round Top, which is being renovated and should be ready by early 2019, according to Hufnagel.

The DRA’s current headquarters at 110 Belvedere Road in Damariscotta would become a full-time nature and education center, according to Hufnagel. The future of the PWA office, at 584 Main St., has not been determined.

Hufnagel presented on the financial aspect of the unification.

About 200 members belong to both organizations. If they pay one membership fee for the combined organization, there would be a loss of about $60,000 per year, according to Hufnagel.

Hufnagel said the hope is that those who belong to both organizations now would contribute an amount to the new organization similar to their current fees.

Hufnagel spoke on the importance of the two organizations’ volunteers.

“We are bringing together strengths,” Hufnagel said of the unification. “This gives us the capacity to take that to another level … We think we can do this and do this strongly and best together, and not only that, but that we’re going to really enjoy it.”

The DRA is working with the Bristol-based group Friends of the Pemaquid Mill and the Old Bristol Historical Society to use the property for projects such as a museum, improvement of fish passage at the lower falls, and public kayak access, according to a recent press release.

The $380,000 includes the purchase price, insurance, interest on potential short-term financing, inspections, closing and administrative costs, and the eventual demolition of some buildings on the property, according to the press release.

One person in attendance asked about branding and the name of the new organization.

“We are creating a new brand,” Hufnagel said. “It must reflect the two threads of culture coming into one.”

Hufnagel said the committee will be thinking of names that would include both of the original organizations. He asked anyone with suggestions to give them to the committee.

Hufnagel said that due to the organizations’ bylaws, all members wishing to vote must do so in person Sept. 25.

“The feedback has been very, very positive,” Hufnagel said.