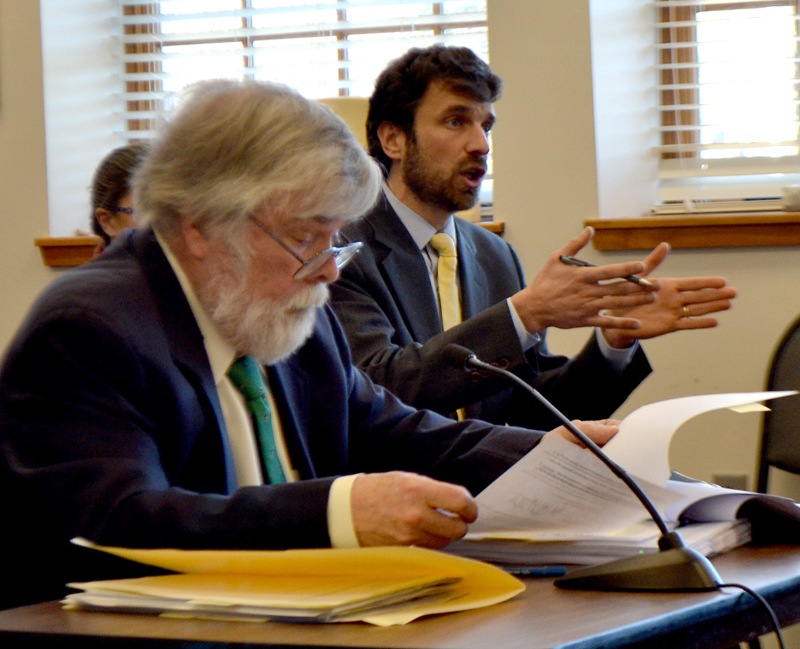 An appeal almost a year in process has recently come to a close, as the Damariscotta Board of Appeals voted 3-2 to overturn the Damariscotta Planning Board’s approval of Stepping Stone Housing Inc.’s project at the former Blue Haven property during a meeting Monday, Feb. 5.

The decision followed nearly an hour and a half of discussion, including statements by both the appeals board and the planning board regarding the latter’s process in approving Stepping Stone’s application.

Gabe Shadis, an abutter to the Stepping Stone property at the corner of Hodgdon and Pleasant streets, filed the appeal with the town April 5, 2017. Neighborhood residents and property owners Brooke Cotter, Amy Lalime, Patricia Shadis, and Jessica Sirois also signed the appeal.

According to the application, the neighbors appealed the planning board’s determination that seven units on the property are a “grandfathered use.”

After receiving an opinion from town attorney Jenny Villeneuve, the planning board, in September 2016, voted 3-2 that the seven units Stepping Stone was proposing for the property at the time were grandfathered.

The neighbors filed a similar appeal in October 2016, but town officials told them any appeal regarding the project would have to wait until the planning board made a decision on the application as a whole.

Stepping Stone later reduced the planned number of units from seven to six. The planning board approved the project March 6, 2017 with a vote of 3-1-1. Chair Jonathan Eaton did not vote. Shari Sage voted against the project, saying she disagreed with the decision to grandfather seven units.

The appeals board first met to discuss the appeal application April 24, 2017. However, after it became evident that the abutters had not read the planning board’s notice of decision prior to filing their appeal, the board voted unanimously to continue the meeting to a future date to allow the neighbors to read the notice and amend their appeal if necessary.

At its Sept. 26, 2017 meeting, the board of appeals voted 4-1 to remand Stepping Stone’s application to the planning board to make additional findings of fact related to the grandfathered units.

The planning board approved an amended notice of decision and finding of facts during its meeting Jan. 8, 2018 addressing the neighbors’ concerns about grandfathering and whether the units had been abandoned.

However, the new finding of facts approved by the planning board said that part of the land use ordinance does not apply, as the residential use of the structures is not non-conforming.

At the board of appeals meeting, the board voted 3-1-1 to accept the planning board’s amended findings of fact. Lucy Harrington voted against the motion and George Betke abstained from the vote.

Harrington, an alternate member of the board, received approval from the other members to participate as a voting member due to the absence of Wallace Schling.

Bruce Bachelder, a member of Stepping Stone’s board of directors, called into question Harrington’s ability to remain unbiased due to statements she made at previous planning board meetings related to the Stepping Stone project.

David Kallin, an attorney from the Portland-based law firm Drummond Woodsum representing the town in the appeal, said Harrington should make a statement about whether she could remain unbiased in making a decision about the appeal.

Harrington said she felt she could be objective about the appeal as her issue was not with Stepping Stone, but with the planning board.

Kallin told Harrington she “should not be making a decision based on prejudgment about how the planning board has dealt with” applications in the past.

Saying she was speaking as a resident of the town and not as a member of the planning board, Sage also expressed frustration with the planning board’s process in reviewing Stepping Stone’s application, specifically in “decisions made to quash evidence” the neighbors tried to submit. She said information was presented to her in private that, had it come before the board, may have caused members to vote differently.

Attorney Jonathan Hull, representing the abutters, said the replacement of the grandfathered structures is not allowed within the town’s land use ordinance. The land use ordinance allows for non-conforming structures to be “repaired, maintained, and improved,” but not replaced, as was Stepping Stone’s proposal, Hull said.

Following Hull’s arguments and statements from Bachelder about the town’s need for low-income housing, both appeals board Chair Bruce Rockwood and Betke separately asked if the matter could be resolved in mediation as a way to avoid future litigation.

“Unless there is a way of finding an appropriate, mediated solution … I have the sense that someone would be likely sued,” Rockwood said.

Harrington made a motion “to accept the appeal and reject the decision of the planning board.” Rockwood seconded the motion to allow the board to have a discussion on the matter.

The motion passed 3-2, with Harrington, Betke, and Fred Sewall in favor. Rockwood and Jim Cosgrove voted in opposition.

Stepping Stone’s application for the replacement of the units will not go back to the planning board, Town Manager Matt Lutkus said. The nonprofit can either appeal the board of appeals decision in court or apply to redevelop the property in another configuration, he said.

The board of appeals decision also will not affect the organization’s current use of the property. Stepping Stone can continue the current use without the need to obtain any new permit, Lutkus said.

Stepping Stone Housing Inc. Executive Director Marilee Harris said the nonprofit’s board of directors will discuss the decision of the board of appeals during its next meeting before deciding its next steps.