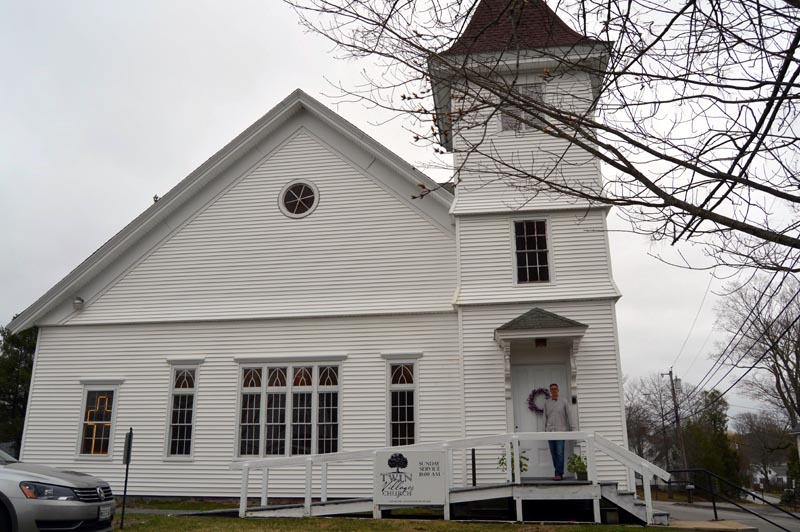 Twin Villages Church has been born again in a new and roomy Damariscotta building, moving across town just in time for Easter Sunday.

The Baptist church moved from a modest space on the second and third floors of 15 Courtyard St., above the Racha Noodle Bar, to the former Damariscotta United Methodist Church building at 40 Church St.

The move came just in time, according to Pastor Phil Nicewonger.

“We asked the congregation to start praying about another space back in October 2018. We began looking into other options right around that same time and it was because the space at 15 Courtyard St. was getting tight,” Nicewonger said.

“The leadership of the church challenged the church to a three-week challenge starting at the end of January, to fast each Wednesday and pray about the new church and listen to what God was telling them,” Nicewonger said. “The response was overwhelming. It cost $175,000 for this building, which we got a loan for, but we raised over $190,000.”

The church hopes to pay off its loan and use the extra money for new furnaces and work on the roof, Nicewonger said.

The church has signed a contract with C.N. Heating and Monitor Services LLC, of Round Pond, to replace the furnaces, and hopes to complete the roofing work over the next couple of months.

“We got a lot of straight cash donations, but there were a few people who gave out of their retirement accounts or in the form of their investments,” Nicewonger said. “It was truly amazing seeing how God put it on people’s hearts to provide.”

The church quickly prepared for a Maundy Thursday Passover dinner on Thursday, April 18. The church had a Good Friday service the following day and an Easter Sunday service two days after that.

Nicewonger said the church has around 50 members, but about 75 people attended the Easter service.

Volunteers from the church and some curious neighbors pitched in to move the church’s furniture and other items. Volunteers also worked hard to clean the church and get it ready for the first events in the new building.

But according to Nicewonger, there wasn’t a huge amount of cleaning to do.

“The previous owners took really good care of the place and kept up with it very well,” he said. 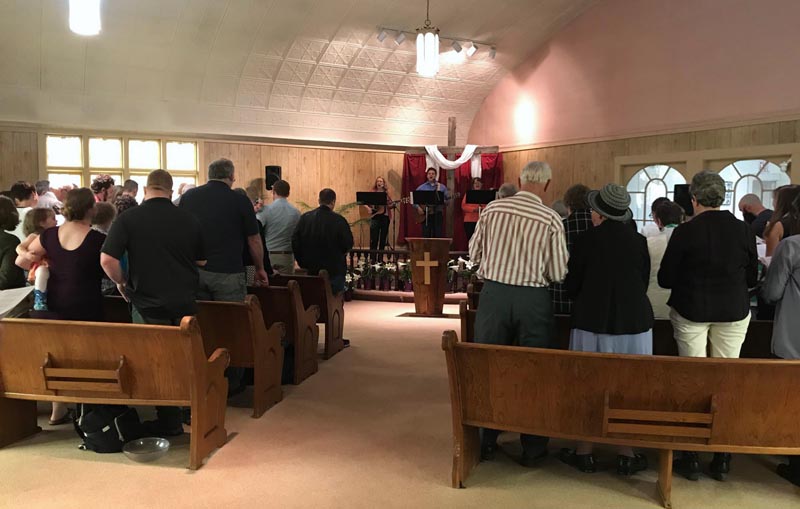 The praise team at Twin Villages Church leads the congregation in worship during the first Sunday service at its new location on Easter, April 21. On stage from left: Sherry Parmelee, Justin Morin, and RoseAnne Holladay. (Photo courtesy Phil Nicewonger)

The 4,032-square-foot building was built in 1850 and has been through several renovations, including a time in the 1980s when the church banded together to hand-dig an expanded basement from the small crawl space that was originally there.

According to the Rev. Karen Munson, a district superintendent responsible for 66 United Methodist churches in Maine, the Damariscotta building was put on the market “after a year of study and discernment.”

The congregation consisted of 12 souls when it voted to disband on Palm Sunday, according to the United Methodist Church’s website, umc.org.

A reply to an inquiry sent to the Damariscotta United Methodist Church’s Facebook account said the members “are individually finding other churches to attend.”

The sale was bittersweet for some members of Damariscotta United Methodist Church, according to Nicewonger.

“On the one hand, they are disappointed about closing their church, but they are glad that a new church was able to move into the building. It is really a unique situation where you have a church moving into a former church building in the same town. It worked out really well. And it just shows that God has a plan for us,” Nicewonger said.

Twin Villages Church was founded in June 2017 after Nicewonger decided to leave his post at the First Baptist Church in Waldoboro as minister of youth and Christian education after more than eight years.

Nicewonger said he was inspired by conversations he had in Damariscotta after joining in a prayer walk there.

“The prayer walk was instrumental in feeling God’s call to the town to start a church there,” Nicewonger said.

The church has experienced “consistent and gradual growth,” according to Nicewonger, and blossomed from a beginning membership of 17 to the current ranks of about 50.

“We have several older couples that come here, but we also have a few younger families with children. It is a nice mix of people,” Nicewonger said.

“We have a heart for families and want to be a resource for families. We want to be a church that plants churches, so we will continue to think strategically about church planting in Midcoast Maine and beyond.”