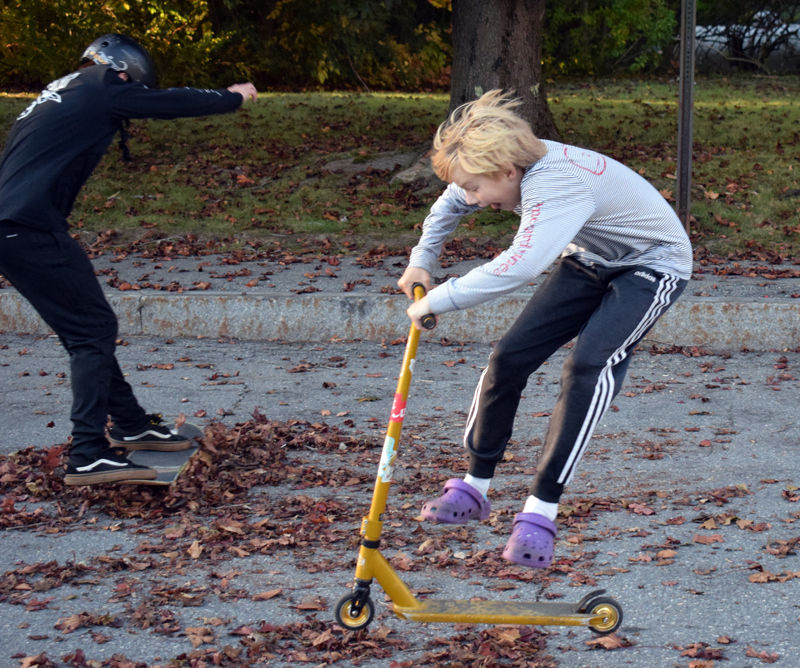 From left: Adrian Oliver and Fletcher Collamore, both 13, do tricks near the corner of Hodgdon and Church streets in Damariscotta on Monday, Oct. 5. The kids are working with parents and police to find a permanent place to skate. (Evan Houk photo)

A group of young skateboarders and their parents have formed a committee to search for a safe place to ride boards and scooters in Damariscotta and avoid conflict with businesses and motorists downtown.

The Damariscotta Skaters Committee planned to address the Damariscotta Board of Selectmen on Wednesday, Oct. 7 and recently created a Facebook page to publicize its efforts.

The committee was formed by Rebekah Oliver, mother of Adrian Oliver and John Waltz, and Marisa McMurtrie, mother of Logan Freeman, after an incident led to the skaters’ dismissal from the area of Elm and Theater streets, near Lincoln Theater. 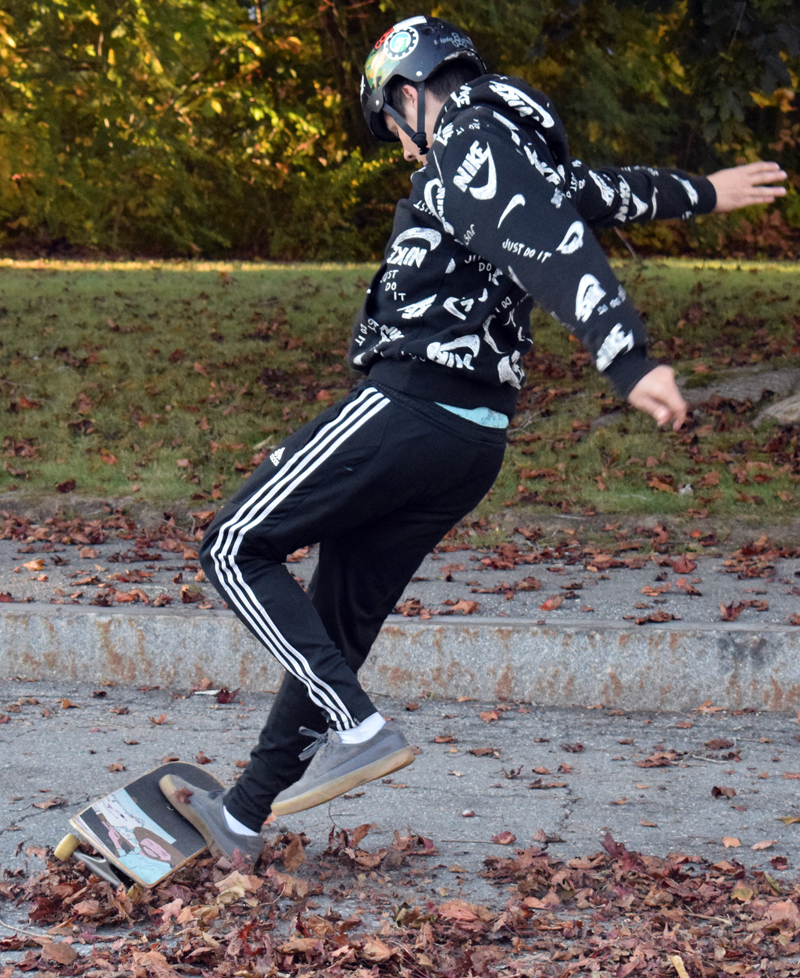 Adrian Oliver, a 13-year-old student at Great Salt Bay Community School, does a trick on a skateboard near the corner of Hodgdon and Church streets in Damariscotta on Monday, Oct. 5. The group of skateboarders has relocated from the area near Lincoln Theater and is seeking a permanent home. (Evan Houk photo)

On the evening of Wednesday, Sept. 23, Adrian Oliver, 13, a student at Great Salt Bay Community School, said a pickup truck struck him at low speed in the area while he was skateboarding. He was not hurt.

Damariscotta Police Chief Jason Warlick said the incident is under investigation. He said there are kids who said the truck hit Adrian and adult witnesses who said it did not.

Warlick said downtown businesses have complained about the kids being noisy and impeding traffic, but the Sept. 23 incident was the “proverbial straw that broke the camel’s back.”

He asked the group to find a less busy place to skateboard so they are not violating a town ordinance concerning loitering, disturbing the peace, and impeding the flow of traffic.

Warlick said he supports the kids engaging in their sport of choice and is working with the new committee to help them find a safer place to skate.

“We’re going to support the kids and work with them collaboratively to find a good spot,” he said.

He said he is impressed by the kids taking the initiative to find a new place to skate and follow their passion.

“They are really good kids, they just need a place to play,” Warlick said.

Rebekah Oliver said she is grateful to Warlick and the Damariscotta Police Department for “supporting our teens while also pushing them to be responsible citizens, to advocate for themselves, and for holding them to a line — wearing helmets, following rules, and remaining respectful.”

The group of about 15 boys and girls have gathered after school at GSB to skate, ride scooters, and just hang out for the past two years in the downtown area, although there weren’t always that many people. 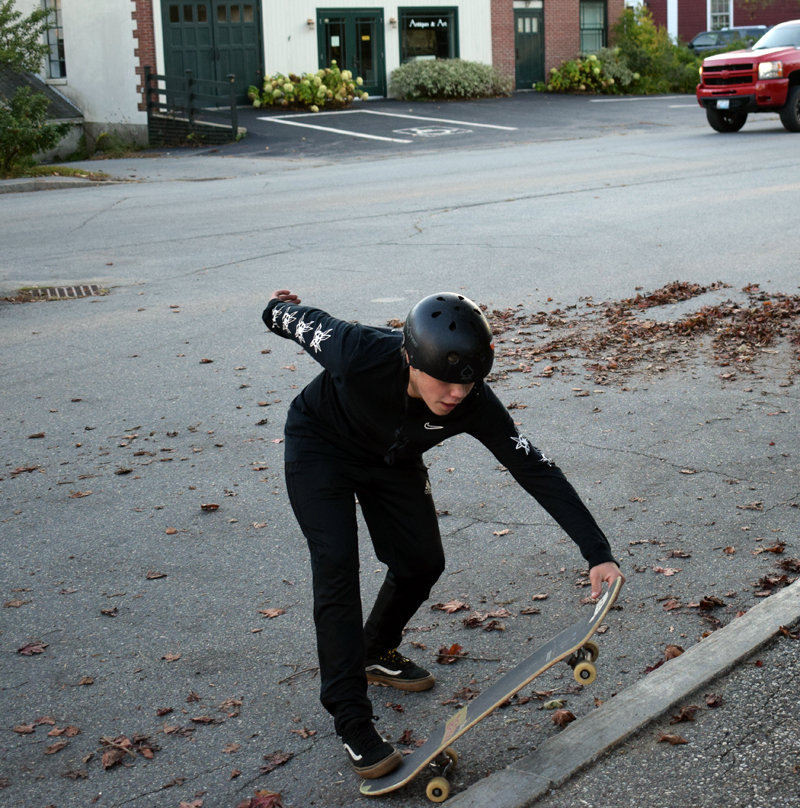 Isaac Rich, a 14-year-old student at Great Salt Bay Community School, picks up his skateboard near the corner of Hodgdon and Church streets in Damariscotta on Monday, Oct. 5. (Evan Houk photo)

They have found a temporary home near the Hodgdon Green assisted-living facility at the corner of Hodgdon and Church streets.

Adrian Oliver said Monday, Oct. 5 that the residents and staff at Hodgdon Green don’t mind, they only ask that the skaters wear helmets and not sit on Hodgdon Green’s grass.

The kids, most of whom attend GSB, have agreed to comply and to avoid cursing or being too loud.

However, the spot lacks some of the features that make the downtown an attractive destination for skateboarders.

Blanc said it is hard to find a place where they can skate because of negative stereotypes about skateboarders that seem to stem from past history in the town.

“It stinks because everywhere we go, whether or not we’re doing anything wrong, they say we can’t skate, even if we’re being polite,” Blanc said.

“They want to break a stereotype that seems to exist from past experience — that they are good kids, engaging in their passion and sport of choice — drug-free, smoke-free, crime-free,” Rebekah Oliver said.

She said the first goal of the Damariscotta Skaters Committee is to find a property where the owner is willing to let the kids skate. 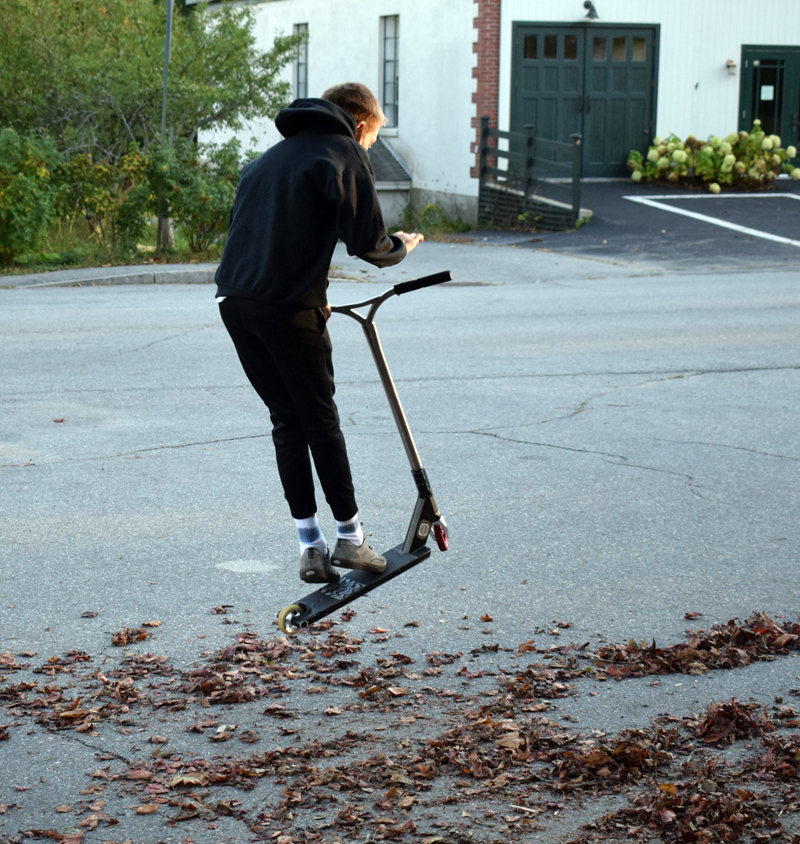 Rowan Donaghy, 13, does a trick on a scooter near the corner of Hodgdon and Church streets in Damariscotta on Monday, Oct. 5. (Evan Houk photo)

Isaac Rich, 14, was also skating at Hodgdon Green on Monday and he said a concrete pad would be sufficient for the group’s purposes. He said they already have ramps and jumps they could set up if they could find a property owner willing to let them do that.

The second step would be raising funds for liability insurance once the group finds a space.

McMurtrie is talking to other towns, like South Thomaston, Camden, and Bethel, to see how they host skating parks and how the towns have gone about getting liability insurance coverage.

“The boys discussed how they might be able to meet with business owners and how they could possibly give back in support of another community improvement project by volunteering their time to show their commitment to being responsible, respectful, and engaged community members,” Rebekah Oliver said.