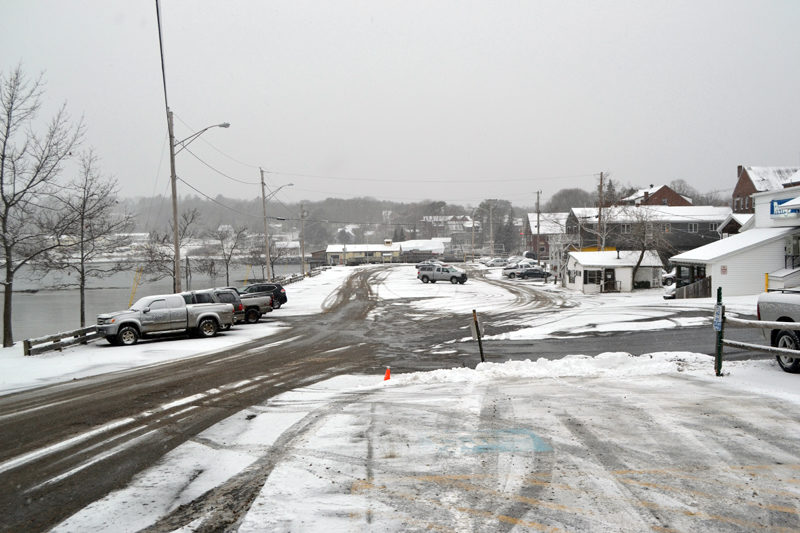 In an effort to complete improvements to the municipal parking lot, including the reconstruction of the lot and the stormwater system, Damariscotta town officials are discussing breaking the project into three phases over five years. (Maia Zewert photo)

In order to complete improvements to the town’s waterfront in a timely manner, the Damariscotta Board of Selectmen is contemplating breaking the estimated $2.8 million parking lot reconstruction project into phases to be completed over five years.

Since the selectmen accepted the waterfront committee’s recommendations in August 2015, town officials have been working with representatives of the Great Salt Bay Sanitary District, the Lincoln County Regional Planning Commission, and the Damariscotta River Association to identify potential funding sources, according to Town Manager Matt Lutkus.

Six components made up the committee’s recommendations, including a reconstruction of the parking lot with flood resiliency measures. The reconstruction would include “correction of the deficiencies” – rebuilding the sewer and stormwater systems and stabilizing and regrading the subterranean fill below the parking lot, according to the committee’s report.

In addition, the reconstruction would include the construction of a mostly below-ground seawall, which would provide protection for downtown buildings and could reduce flood insurance rates for downtown property owners.

When the waterfront committee made its recommendations, it identified federal and state grant programs as possible funding sources for the reconstruction component.

During a meeting with representatives from the Clean Water State Revolving Fund in early January, the town was informed it likely would not qualify for a “forgivable” loan, essentially a grant, to reconstruct the sewer line and stormwater system in the parking lot, Lutkus said.

The reconstruction of the parking lot and the stormwater system would be done in three phases, with each phase costing approximately $320,000, for a total project cost of $962,000, Lutkus said. The phased project would not include the construction of the seawall or other flood resiliency measures, which accounts for the decrease in price.

Although protecting the downtown from sea level rise and storm surge continues to be a high priority, there is currently a lack of federal grant funds available, Lutkus said. The phased work would not prevent future flood resiliency efforts, and town officials will continue to look for funding sources.

The parking lot reconstruction project would be funded partially through town capital funds, as well as grants and private funds.

The town is also seeking input from downtown business owners regarding the planned reconstruction, Lutkus said.

“It’s important because the downtown businesses have a very important role and a lot at stake with this project, especially as we start talking about maintaining the infrastructure of the property,” Lutkus said. “They have a very strong, vested interest in the future of this property.”

Lutkus said he would be happy to set up a series of community conversations to discuss the project with the downtown business owners and listen to their feedback.

“It’s important to have their participation, not just when we talk about negative things, like pay-for-parking, but also when we start talking about the positive aspects, like the parking lot reconstruction,” Lutkus said.

Although the board did not take a formal vote, there was a consensus among the board that if the parking lot reconstruction could be funded through town funds, grants, and private donations, the board would put the idea of pay-for-parking on hold, Lutkus said.

In addition to the parking lot reconstruction, the town is looking to complete two more of the waterfront committee’s recommendations: the construction of public restrooms in the municipal parking lot and improved pedestrian access.

During a special town meeting Nov. 16, Damariscotta voters approved two bonds totaling more than $500,000 for public works projects and equipment. Of the amount approved, $60,000 is slated for the construction of public restrooms in the small parking area adjacent to Taco Alley in the municipal parking lot.

The total estimated cost of two restrooms with two stalls each is about $150,000, Lutkus said. In addition to the funds from the bond, the town has set aside $11,000 in capital reserves for the construction of the restrooms. Additional funds from grants and donations would be needed to complete the restrooms.

According to the waterfront committee’s recommendations, the improvement of the pedestrian walkway through Taco Alley to the parking lot is estimated to cost $43,000.

The board will continue to discuss the waterfront improvements during future meetings.