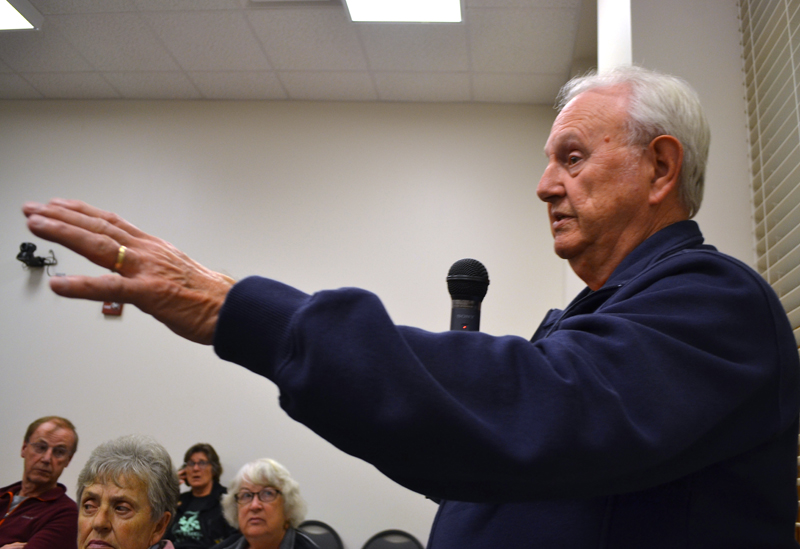 In back-to-back public hearings Monday and Tuesday, Oct. 16 and 17, Damariscotta residents and business owners expressed a mix of opinions about the upcoming citizen-initiated referendum on whether to enact a moratorium on commercial development.

The moratorium calls for a temporary ban on new retail buildings of larger than 2,500 square feet and on any new construction, expansion, or use that requires approval under town ordinances.

If voters approve the 180-day moratorium Tuesday, Nov. 7, it would take effect retroactively to June 7 and end Dec. 4. If at the end of 180 days the Damariscotta Board of Selectmen finds the issue necessitating the moratorium still exists and the town is making reasonable progress to alleviate it, the board could vote to extend the moratorium to June 1, 2018.

After consulting with town attorney Jenny Villeneuve at their Sept. 19 meeting, the selectmen voted 4-1 to schedule the special town meeting to place the moratorium before residents. Selectman Mark Hagar cast the opposition vote.

The selectmen and the Damariscotta Planning Board held the public hearings Monday and Tuesday in accordance with state law. Many residents attended both meetings.

During the Oct. 16 meeting, some of the circulators of the petition calling for a moratorium spoke about their personal reasons for getting involved.

Kimberly Sampson, a resident of the town for six years, said she decided to help circulate the petition after watching the planning board review and approve the Dollar General and Sherwin-Williams project. The stores are under construction at the corner of Main Street and Biscay Road.

“When the Dollar General and Sherwin-Williams was passed, I felt like there was nothing I could do. I wasn’t educated enough to know I might have been able to stop them,” Sampson said.

While Sampson referred to the situation as “an emergency,” others, including Lou Abbotoni and Scott Abbotoni, disagreed, saying the moratorium does not meet the statutory definition of an emergency.

The moratorium language refers to the town as being “suddenly under threat of increased development pressure from large-scale retail development.”

Scott Abbotoni said state law defines large-scale retail development as a business with a floor area of 75,000 square feet or more in one or more buildings at the same location.

The town of Damariscotta already has a 35,000-square-foot retail size cap as the result of a referendum vote in 2006.

After many in the audience said they support commercial development because it would grow the tax base, Amy Lalime, another petition circulator, asked what the town would collect in property taxes from the Dollar General and Sherwin-Williams project and a proposed development at 435 Main St.

During a public hearing for his proposal for the 11-acre property at 435 Main St. in September, Commercial Properties Inc. CEO Daniel Catlin estimated the development could result in $60,000 in annual tax revenue for the town.

Catlin, who also attended the Oct. 16 and 17 public hearings, said the estimate only takes into account the real estate and not any personal property of the potential commercial tenants.

Lucy Harrington said she is not against development coming in to town, a statement echoed by many in the room.

“We just don’t want it to look like crap,” Harrington said.

Damariscotta Planning Board alternate Jenny Begin, who also circulated the petition, said the moratorium would provide a pause.

“For me, it was a way to look at our ordinances and see if anything needed to be addressed,” Begin said.

During the planning board meeting Oct. 16, the board considered whether both Begin and planning board member Shari Sage should recuse themselves from discussing or voting on the 435 Main St. project due to their involvement in circulating the petition.

A vote on a motion to require recusal resulted in a 2-2 tie and the motion failed. Wilder Hunt and Neil Genthner voted in favor and Adam Maltese and Chair Jonathan Eaton voted against the motion.

“This does seem to be more about aesthetics and facades, so when I read in this moratorium about the town being under threat, it just seems intellectually dishonest,” Pierce said.

Catlin, through Damariscotta Main Street LLC, has the property where he intends to build under contract with the owner, Lincoln Block LLC. Jeff Pierce and Steven Pierce signed the agreement as the sellers.

Similar statements about the moratorium were made during the Oct. 17 hearing before the Damariscotta Board of Selectmen’s meeting.

Without a growing commercial tax base to steady or even reduce taxes, Damariscotta runs the risk of forcing longtime residents out due to rising taxes, Sandi Day said.

“You’ll lose the history when you lose those people,” Day said.

Damariscotta voters will have the final say on the moratorium on retail development during a special town meeting by referendum Nov. 7.