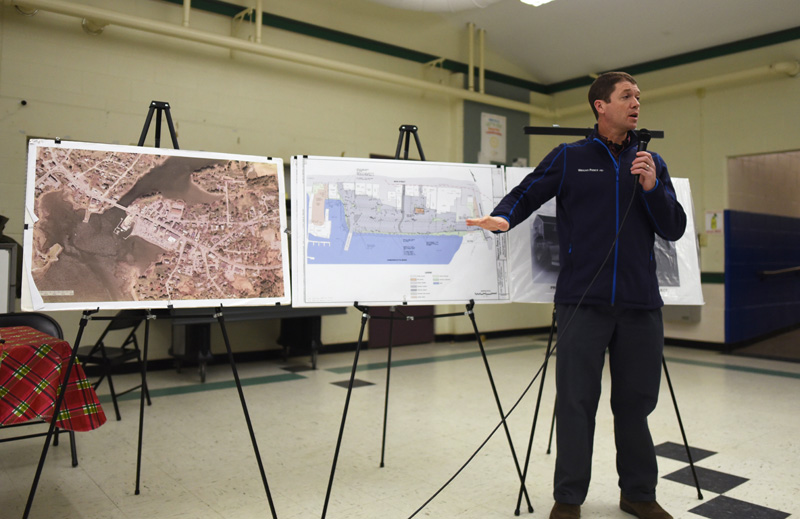 Downtown Damariscotta business owners and members of the public attended a community conversation on upcoming improvements to the waterfront and municipal parking lot at Great Salt Bay Community School on Thursday, Jan. 17.

The town received an anonymous $1 million pledge for improvements to the waterfront, including the new public restrooms, in September 2018.

The town will use $50,000 toward the construction of new public restrooms, and the other $950,000 will go toward other improvements to the waterfront.

Wright-Pierce Engineering’s estimate for the entire project, including the design and engineering, construction management, parking lot and drainage reconstruction, walkways, and park enhancements, is $1,253,000 plus a contingency, according to Damariscotta Town Manager Matt Lutkus.

Travis Pryor, of Wright-Pierce Engineering, explained some of the plans for the lot.

He said the design currently includes reconstructing the parking lot and improving the drainage by adding check valves to storm drains that would prevent water from coming back up into the parking lot. It also includes raising the elevation of the lot by the water, increasing pedestrian access by adding a walkway from Main Street to the water, and improving landscaping.

He said the new valves will prevent some of the flooding that currently happens during king tides, when salt water from the Damariscotta River flows up from the storm drains.

He said construction will include the installation of a conduit so that in the future, utilities could be relocated underground.

Some in attendance were concerned that raising the elevation of some of the parking lot would push any flooding that did happen toward the buildings.

Pryor said the increased elevation would protect the integrity of the lot.

“The improvements that are being made now won’t make the flooding situation worse,” Lutkus said.

“They will make it incrementally better, because you’re going to have some subsurface storage capacity with the pipes and with the catch basins that have valves that are preventing that river water from being in there,” Pryor said.

He said the elevation will help keep waves from coming up into the parking lot.

“This is not the final solution at this time. This is a first step,” Pryor said. He said that in the future the town could build a seawall and install a pump system to prevent flooding.

“This does not address the major flooding problems that have been projected, as far as what’s going to happen 50, 60, 70 years down the road,” Lutkus said. “It does address the king tide situation. … We don’t have the money to protect against a 100-year storm.” 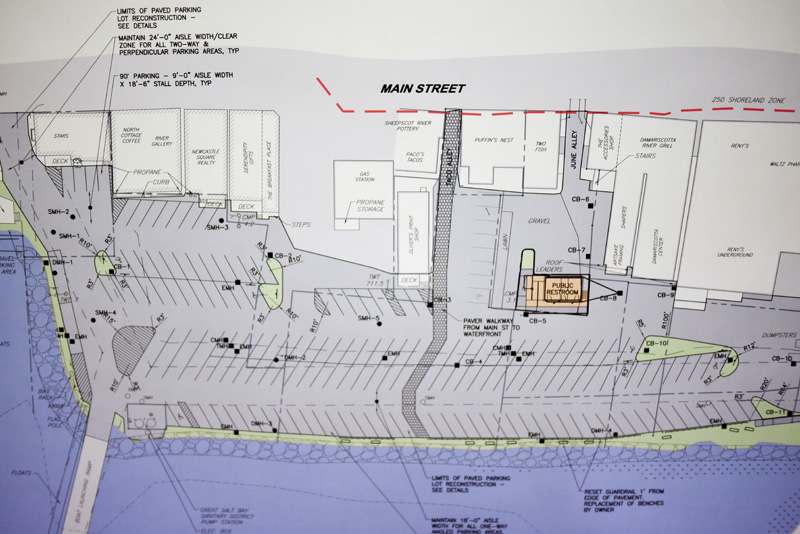 Seth Hagar, vice president of Hagar Enterprises Inc., which holds the town’s snowplowing contract, said he is concerned that having recessed islands in the parking lot could create problems.

He asked if the project would restrict access points to push snow into the river. Lutkus said it would not.

Others suggested that $30,000 for the pedestrian walkway could be used for something else. The pathway would run from Main Street through Taco Alley and the parking lot to the water. It would take away three parking spaces, however, the parking lot project as a whole would add a couple of spaces, Pryor said.

“(The parking lot is) not that big. If you can see it from Main Street, they’ll find a way through the cars and go to the park,” said Frieda Hanlon, who owns Stars Fine Jewelry and Gifts with her husband.

Pryor said that without the pedestrian walkway, there would be no Americans with Disabilities Act-compliant route to the water.

Many in attendance expressed support for the pedestrian walkway to be from June Alley – the driveway adjacent to the Damariscotta River Grill building – to the restrooms. The town would need to purchase June Alley.

LeeAnna Libby, manager of the wastewater division at the Great Salt Bay Sanitary District, suggested that Main Street property owners may want to replace or reconfigure their sewer lines during construction.

“They are all clay tile … The lines are in pretty good shape, but overall, they’re an accident waiting to happen,” Libby said of the eight sewer lines in the parking lot. She said it may be worthwhile to replace them now, so the parking lot would not need to be dug back up after construction.

“The advantages of them doing this jointly are that they will save a lot of money by combining resources to pay one contractor to replace all the lines, and by doing this all at once, it will enable a much more effective layout of the lines than the mishmash that is there currently,” Lutkus said in an email.

There was also a discussion on the entrances and exits to the parking lot.

“I’m wondering if we’ve addressed the problem of traffic flow, entrance and exits from the parking lot,” said Alan McKinnon, who owns the driveway between Stars and Fisherman’s Catch Seafood Market.

Lutkus said he would speak with McKinnon about the possibility of the town owning the lane, or having a right of way, and possible solutions.

At the end of the meeting, Lutkus recapped the possible changes that those in attendance would like to see: no landscaping islands in the parking lot; having the pedestrian walkway only go from Main Street to the public restrooms through June Alley, rather than from Taco Alley to the water; and not eliminating any parking spaces for a pedestrian walkway.