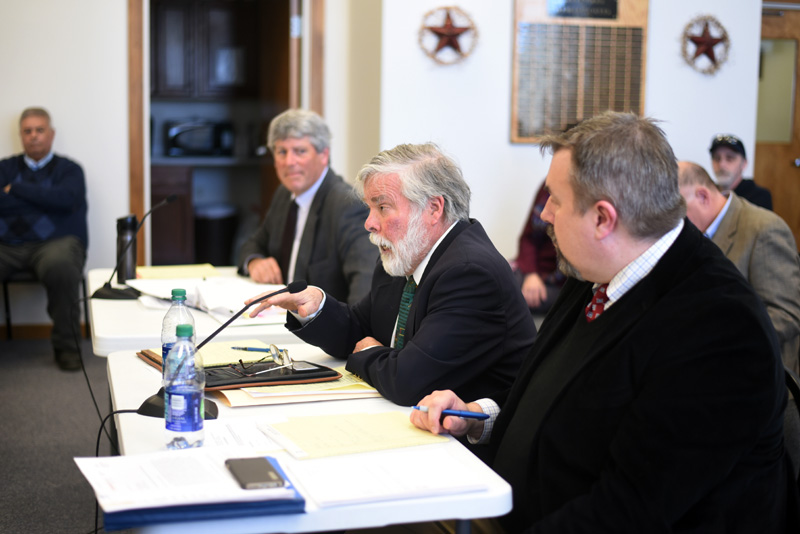 Attorney Jonathan Hull speaks on behalf of Our Town during the Damariscotta Board of Appeals’ public hearing on the 435 Main St. development Tuesday, March 27. (Jessica Picard photo)

The Damariscotta Board of Appeals voted 3-2 that an appeal from Our Town regarding the 435 Main St. project did not have standing and dismissed the appeal Tuesday, March 27.

After several meetings with the developer, the Damariscotta Planning Board unanimously approved Catlin’s application Dec. 4.

Attorney Peter Drum then filed an appeal on behalf of Our Town and Anna Jansen, owner of Head Tide Oven at 456 Main St., on March 2.

The appeal application identified Jansen, whose bakery is down the road from the site of the development, as a member of Our Town and stated that she was “directly aggrieved” by the planning board’s approval of the project.

The appeal application listed 22 issues with the planning board’s approval of the project, including two alleged procedural irregularities regarding public hearings and public notices.

On Friday, March 23, Drummond Woodsum attorneys Gary Vogel and Amy Tchao submitted a letter on behalf of the project applicant, Catlin’s Damariscotta Main Street LLC, asking the board of appeals to dismiss the appeal “for lack of standing and/or as an untimely appeal.”

In their letter, Vogel and Tchao also requested that, in the event the board of appeals found the appeal had standing and was timely, the board should only review the Feb. 5 decision to remove the condition of the community impact study. 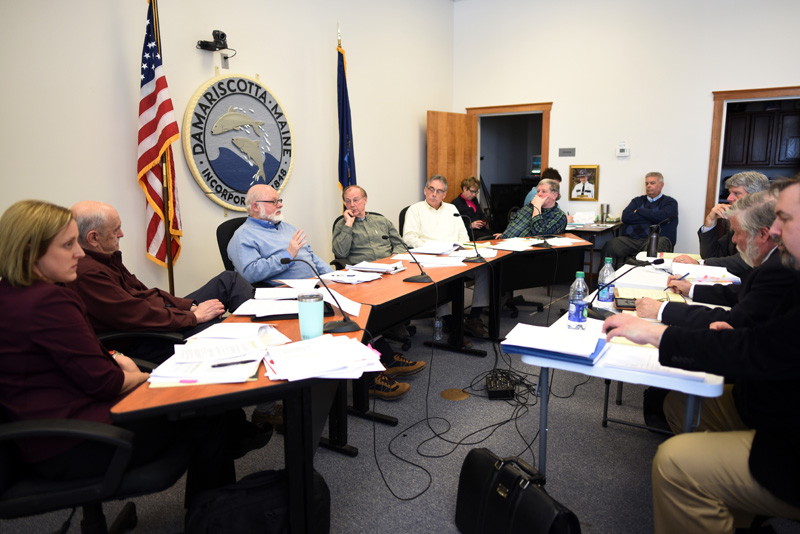 The Damariscotta Board of Appeals hears an appeal of the Damariscotta Planning Board’s decision to approve the 435 Main St. development project Tuesday, March 27. (Jessica Picard photo)

The board had a lengthy discussion about which decision counted as the final decision: a Dec. 4 voice vote, a Jan. 8 written decision with the error, or the Feb. 5 final signed decision.

“To me that January decision was a clerical error, not an operative data point,” Meader said.

The board unanimously voted that the appeal was timely, as the planning board’s final decision was signed Feb. 5 and the appeal was filed less than 30 days afterward.

The board then moved on to address the issue of standing.

Because the Our Town coalition does not have legal standing to sue or be sued, the appeal had to be connected to a participating person involved with the association, Meader said.

The board then considered whether anyone, including Jansen, could be counted as a participant in Our Town, as no one was believed to be on record stating they were speaking on behalf of Our Town during public meetings about the development.

Meader said it is her understanding that “participating means you engage and let the board know where you stand.”

“I think it’s the Hail Mary pass, and that’s all it is,” board member Wallace Schling said of the appeal.

Board member Fred Sewall said he is concerned that acting on the appeal application would allow anyone who is against commercial development in general to bring all cases in front of the board.

The board of appeals then decided that the appeal did not have standing with a 3-2 vote, thus ending the meeting.

The appellant has 30 days to request that the board reconsiders, or 45 days to file an appeal in Superior Court.

Both options are being considered, according to Hull.