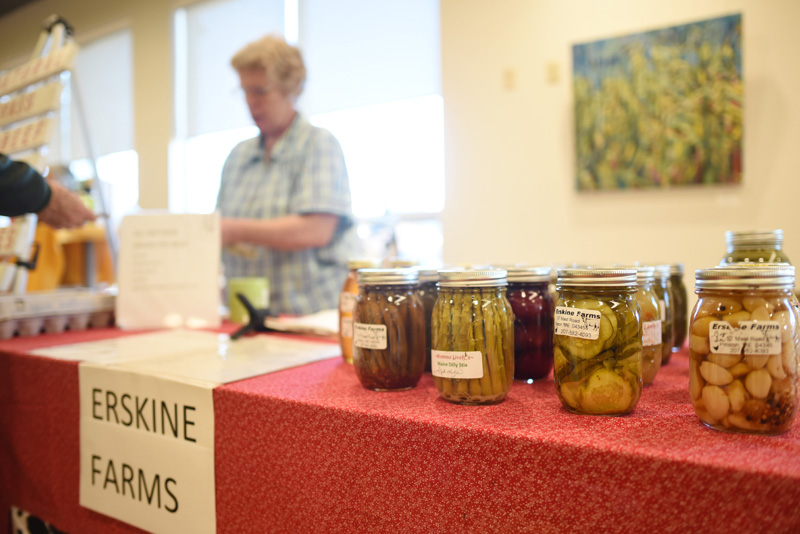 Jars of asparagus, pickles, and other goods are displayed on the Erskine Farms table as Iris Erskine helps a customer at the indoor farmers market at the CLC YMCA in Damariscotta, Friday, Nov. 30. (Jessica Picard photo)

The Damariscotta Farmers Market, which sets up shop at two outdoor locations from spring into fall, has lengthened its season with a new cold-weather location at the Central Lincoln County YMCA.

Nine vendors from the market are now open from 9 a.m. to noon every Friday inside the lounge area at the newly renovated YMCA.

“This new facility is gorgeous and it’s great to be out of the elements,” said Brady Hatch, who owns Morning Dew Farm with her husband.

“We are reaching a new audience by being here,” she said. She called the YMCA a “hub for community activity” and said it has been very welcoming. 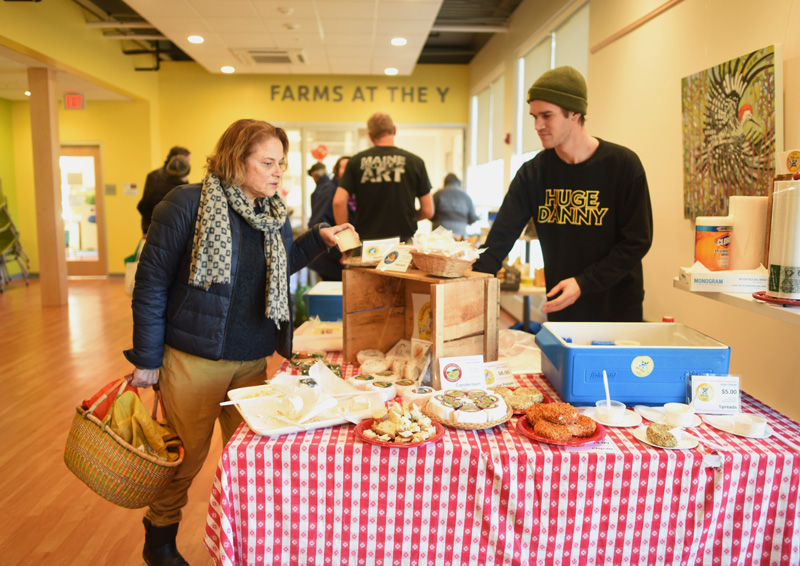 Daria White, of Damariscotta, looks at cheese from Appleton Creamery as employee George Hill mans the creamery’s table at the farmers market at the CLC YMCA in Damariscotta, Friday, Nov. 30. (Jessica Picard photo)

The farmers market was at the Damariscotta River Association’s Round Top Farm, not far from the YMCA, every Friday from May 18 to Oct. 26 this year and in the parking lot of Rising Tide Community Market every Monday from June 4 to Oct. 1.

“Generally, the market ends outdoors for the season at the end of October and we must wait until the spring for it to be back,” CLC YMCA CEO Meagan Hamblett said. “It has been a dream of mine for the Y to host the market indoors so that it could become a year-round market of locally sourced, fresh food for all residents of Lincoln County to enjoy.” 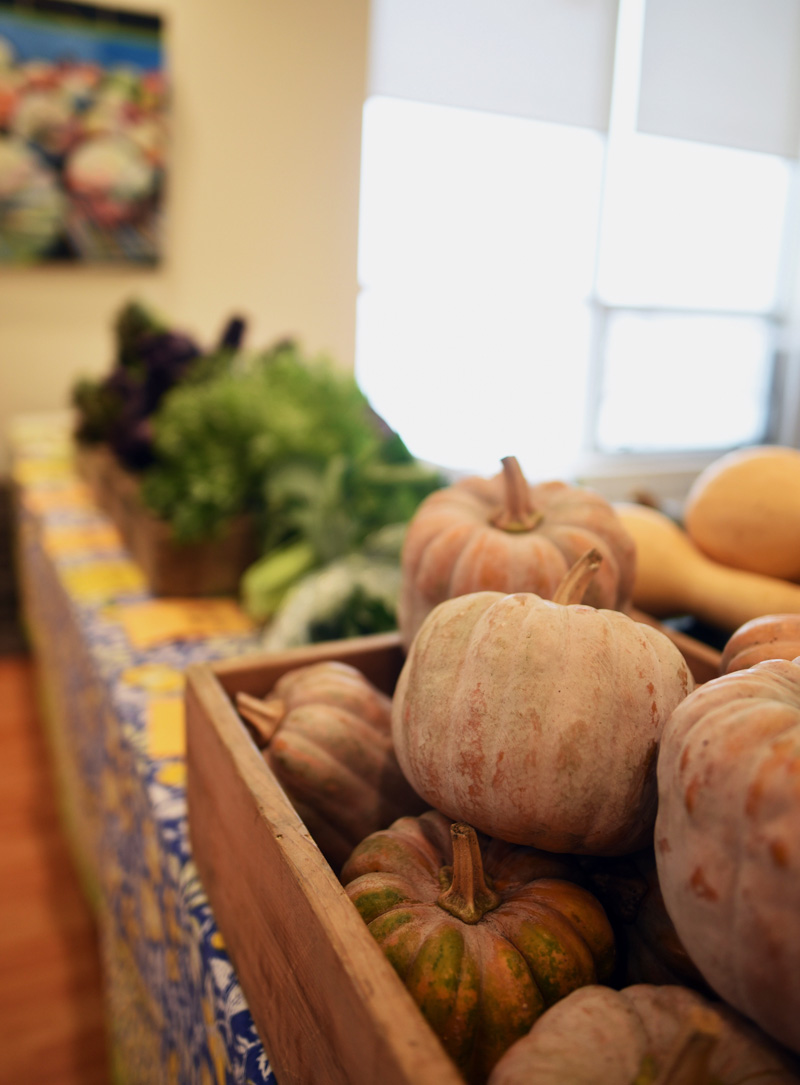 Produce from Morning Dew Farm on display at the farmers market at the CLC YMCA on Nov. 16. (Jessica Picard photo)

The farmers decided to move the market indoors after the Y extended an invitation, according to Hamblett. The vendors will leave the Y for their traditional outdoor markets in the warmer months.

“This gives me an additional market,” said Tracy Penniman, who owns Pemaquid Lobster & Seafood with her husband.

Penniman said they participate in six different farmers markets in the summer, but usually only four in the winter. The Damariscotta market moving into the YMCA has given them a fifth winter market.

“We’re hoping that this will help the summer market as well,” said Iris Erskine, of Erskine Farms in Pittston.

Erskine, standing with her jars of pickles, honey, and an assortment of frozen meats, said that while some of the customers at the Y are regulars at the outdoor market, many have been new faces.

Damariscotta resident Daria White, weaving through the vendors’ tables with a full basket of groceries, said she has frequented the outdoors markets.

“I go to the market every week,” she said, as she enjoys supporting local businesses.

“Living in Maine, any time you can get to a market is a wonderful asset,” said Inder Cheema, of Southport. Cheema said that at this time of the year, farmers markets can be hard to come by.

“It’s a real needed boon for the slow season,” vendor Derek DeGeer, owner of Hootenanny Bread in Damariscotta, said of the indoor market. DeGeer said that by 9:30 a.m. or 10 a.m., it is usually very busy. 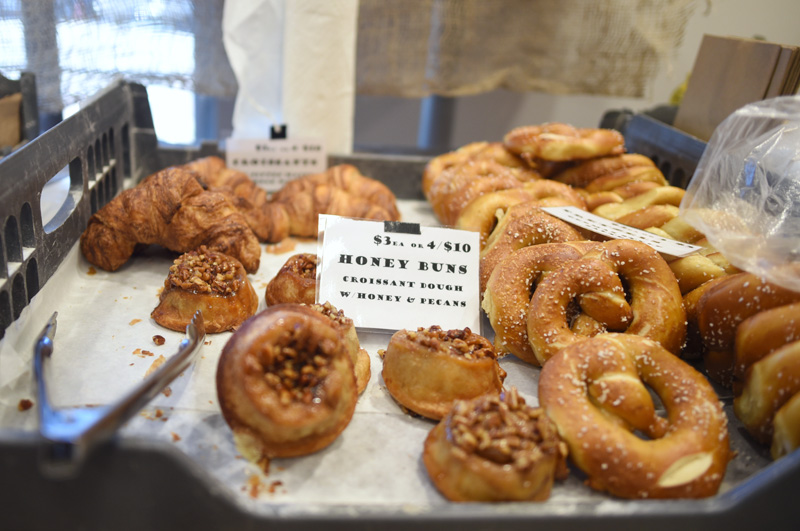 Goods for sale from Hootenanny Bread at the farmers market at the CLC YMCA, Friday, Nov. 30. (Jessica Picard photo)

“I think everybody has been pleasantly surprised,” he said.

DeGeer said many shoppers have never been to the market before, while some customers he knows from the outdoor markets now stop by after a workout at the Y.

“It’s great to see them in a different setting,” he said.

“The farmers market is all about community and bringing people of all backgrounds and ages together. So is the Y,” Hamblett said. “In addition to having an active lifestyle, which many do at the Y, to be healthy one also needs the nutritional aspect. Hence, FARMS at the Y and the indoor farmers market makes for a well-rounded, holistic approach to health.” 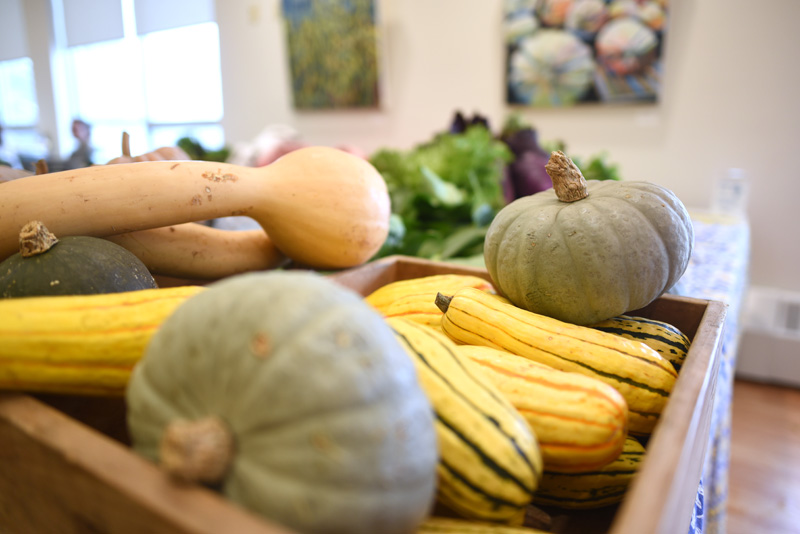 Produce from Morning Dew Farm at the farmers market at the CLC YMCA on Nov. 16. (Jessica Picard photo)

Hamblett said the children in the new prekindergarten program at the Y visit the vendors on Friday mornings, purchase ingredients, then learn to prepare the food they purchased.

She said that in the future she would like the FARMS at the Y staff to prepare and sell a dish at the market each week using the ingredients available there. She also hopes to offer reusable shopping bags featuring the logos of the YMCA and the farmers market.