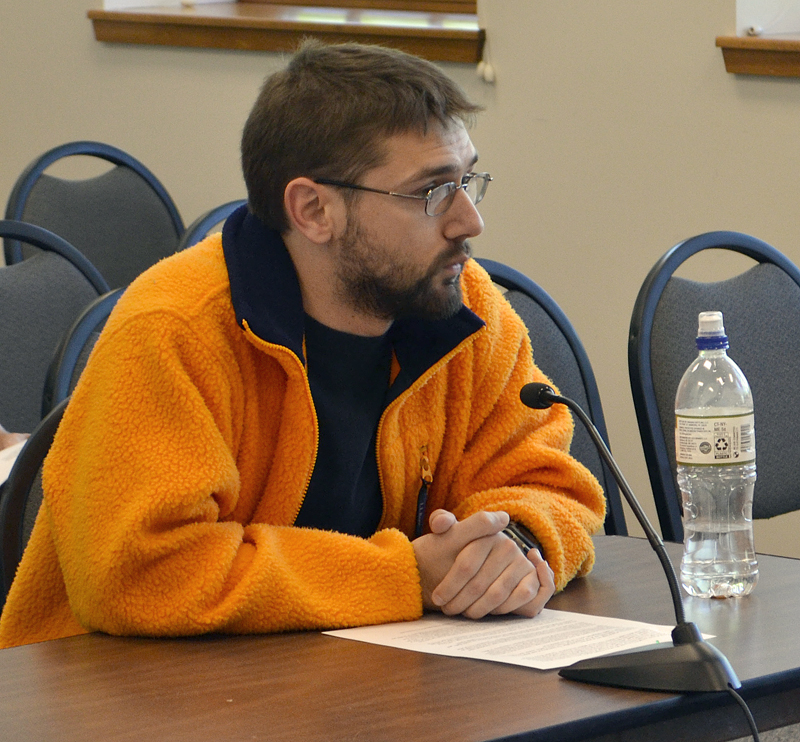 Ranger Langdon, of Newcastle, an employee of Hannaford Supermarket in Damariscotta, asks the Damariscotta Board of Selectmen for action on plastic bags during the board’s meeting Wednesday, June 7. (Maia Zewert photo)

A Hannaford Supermarket employee and Newcastle resident asked the Damariscotta Board of Selectmen on Wednesday, June 7 to consider developing an ordinance that would impose a 5-cent fee on disposable plastic bags.

Ranger Langdon spoke about other countries, states, and municipalities, including Portland and Topsham, that have enacted similar ordinances. Other towns in Maine, such as Freeport, Saco, and York, have banned the bags.

The Maine Legislature recently passed a bill to establish a statewide policy promoting the use of reusable bags, but Gov. Paul LePage vetoed the bill last month. The House sustained the veto 73-70.

Langdon asked if the selectmen would consider an ordinance that would place a 5-cent fee on plastic bags. Customers would pay the fee for each bag they use.

In other municipalities, the money from the bag charge goes either back into the business or to a local charity, Langdon said.

While the fee might not have a large impact on the use of plastic bags in the world, Langdon said it would be a step in the right direction.

“In order to create a paradigm shift, you have to start somewhere,” Langdon said. “Without the paradigm shift, we’re all kids covering up our bad decisions and sweeping them under the rug.”

Chair Robin Mayer thanked Langdon for his suggestion and said the board would discuss the topic during a goal-setting meeting after the annual town meeting. In the meantime, she encouraged people to use canvas or recyclable bags while shopping.