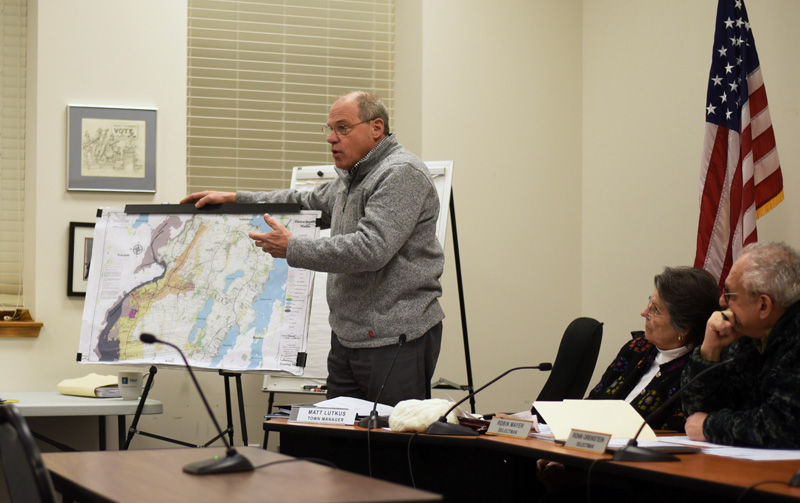 Around 25 Damariscotta residents, business owners, and others attended a community conversation with the Damariscotta Board of Selectmen to discuss drafts of two marijuana ordinances Wednesday, Jan. 2.

Damariscotta voters decided to “opt in” and allow medical and recreational or “adult use” marijuana businesses to open in the town Nov. 6.

The town now needs to approve a marijuana licensing ordinance and amendments to its land use ordinance for marijuana establishments.

Damariscotta Town Manager Matt Lutkus, with attorney Amanda Meader and interim Town Planner Bob Faunce, drafted ordinances in order to start a public conversation. The ordinances would regulate the number and cost of licenses available for each type of business, as well as where the businesses can open.

“Damariscotta is one of the first towns in the state that has opted in under the new state statute,” Lutkus said.

“We want to hear from you. We’re trying to gather information on how we might proceed,” board of selectmen Chair Robin Mayer told the audience. “We need your input so we can finalize those drafts and take them to a town vote later in the year.”

Resident Dick Mayer asked if any other local towns have opted in.

Lutkus said he does not know of any other local towns that have opted in or voted on the issue yet.

“They’re kind of looking at us to lead the way,” he said. “Most towns are looking at Damariscotta as their service center. My guess is that most of them will not opt in. They’ll look to us to provide that commercial activity.”

“I think any restrictions on C1 … personally, I think it’s a little bit hypocritical. We have nine liquor licenses from the bridge to the Mediterranean Kitchen,” said Pennington Way IV, a Damariscotta resident and owner of Sea Smoke Shop and Wicked Scoops.

“We consider ourselves a service town,” Way said. “Why would we limit our economic ability here in town and park it way out in C2 and drive those people out of town?”

“We want people to come downtown,” he said. “From a safety standpoint, this is an all-cash business. Putting it somewhere outside of view, outside of town, away from public view, not only fulfills the stigma, it’s a security concern.”

“Constraining it from the beginning is not the best message,” he said. “We will drive economic opportunities to other areas in the region.

“If we want to blossom and be the service center that we always say, let’s embrace this. Let’s foster it, let’s have it be job creation. Let’s do it the right way, but let’s not choke it off right at the beginning.”

After the community conversation, Selectman Amy Leshure said she is hesitant to prohibit the businesses downtown.

Robin Mayer said she has had people tell her they do not support marijuana businesses downtown.

“They believe it will change the flavor of the town,” she said.

Some in attendance asked why the different types of marijuana businesses would be restricted to certain parts of town.

Lutkus said about 150 residents responded to a survey over a year ago, with many saying they would like marijuana businesses restricted to certain districts.

Lutkus gave the example that commercial cultivation may make more sense in a rural area, due to the large size of some growing operations, rather than in the downtown or residential areas. 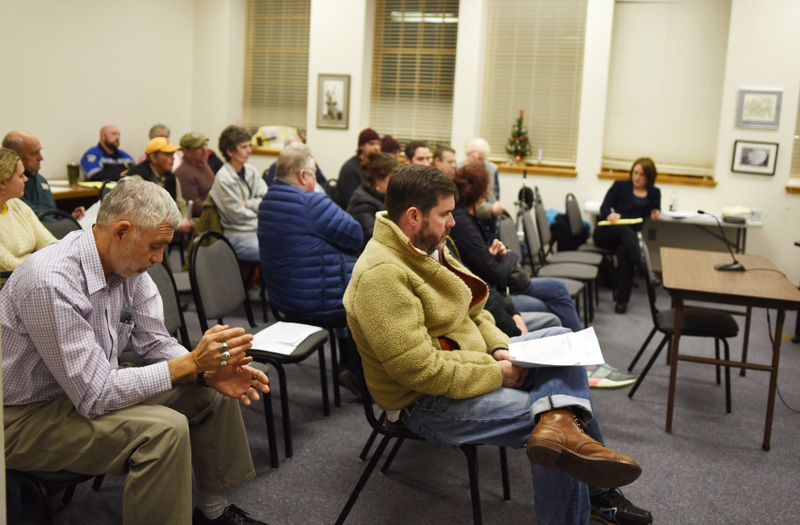 Dick Mayer asked if a new day care opening near a marijuana business would affect the marijuana business, since the ordinance states that the businesses cannot be within a certain distance of an educational facility, such as a school or day care.

“If there is a business in place, a cannabis business of some sort, a day care, for example, couldn’t set up shop next door and effectively close them down. They would be grandfathered, so to speak,” Meader said.

A day care center or school could open, but the existing commercial marijuana establishment would not be required to move, according to Lutkus.

Dick Mayer said some people in town are concerned that Damariscotta will become the “epicenter for commercial cannabis in the Midcoast.”

Ryan Ellis, co-owner of the downtown medical cannabis storefront Greenport Cannabis Co., which opened in August, said he does not think new establishments should be prohibited from downtown.

He said he and his business partner, Mark Ferrero, would like to open a retail, or adult-use, establishment in a separate suite of the building their current business is in.

“As far as imagining that Damariscotta is going to somehow be a Mecca of acquiring cannabis is, no offense, kind of a farce. Everybody already knows where to get cannabis,” Ellis said.

“I don’t foresee that people are going to be coming in an exodus to this town specifically,” he said. “I have a sign that says ‘cannabis’ right out on Main Street, so if it was going to attract people that were looking for cannabis, that weren’t from here, they would have come through my door.”

Ellis said retail businesses should be required to have a medical license as well.

Ferrero agreed that those looking to open a retail shop should also be medical providers.

“A retail store owner has no vested interest in that person as an individual,” he said. “They simply want to give them a product and get them out the door. We take the time to talk to patients.”

“As for it being a Mecca and the town being overrun with cannabis users, I also think that is a fallacy,” he said. “As a store owner, I would love to see a massive amount of people. I don’t think it’s going to happen.”

Resident Jenny Begin said she would like the town to encourage as many testing facilities as possible.

“A testing facility is basically like a scientific lab,” she said. “I just think that that would be a good business to have in town.”

Resident Robert Mattes suggested that the town may need to grow its police force due to the possibility of more impaired driving.

“I don’t want (police) to be overtaxed in their normal duties to the town because there’s going to be more people coming in for this specific kind of product,” he said. “I’m not against it, but I just think it needs to be thoughtfully done.”

Warlick, the police chief, said he is not sure whether there will be more impaired driving or not, but he is concerned about odors coming from establishments, specifically where the plant is grown.

Warlick said that since people can call the police for a “noxious odor” that offends them, he is unsure how police could act to appease both the caller and the legal, licensed business.

Faunce suggested that the ordinances prohibit discernible odors from establishments.

Warlick said he would oppose the sale of cannabis products that resemble candy or other things that would appeal to children.

Some in attendance gave examples of how marijuana has helped them.

Percy Nichols, a Dresden resident who used to live in Damariscotta, said he used to be addicted to drugs, but cannabis helped him become sober.

Pinkham suggested that there be no annual town licensing fee for medical establishments.

“They’re already paying fees to the state for their licensing,” he said.

Resident Al Trescot said he wants to grow hemp in his 8-acre field and wants to know if it is allowed.

Meader said she would look at the state regulations for hemp.

Town staff will put together answers to the questions from the meeting and post them on the town website in the near future, Robin Mayer said.

“We will take all of this under advisement as we re-look at the drafts,” she said.

The selectmen will hold more public meetings on the draft ordinances in the future.

The selectmen granted Warlick permission to apply for a $1,611 Edward Byrne Memorial Justice Assistance Grant from the U.S. Department of Justice. The department would use the grant to buy a laptop for a cruiser, Warlick said.