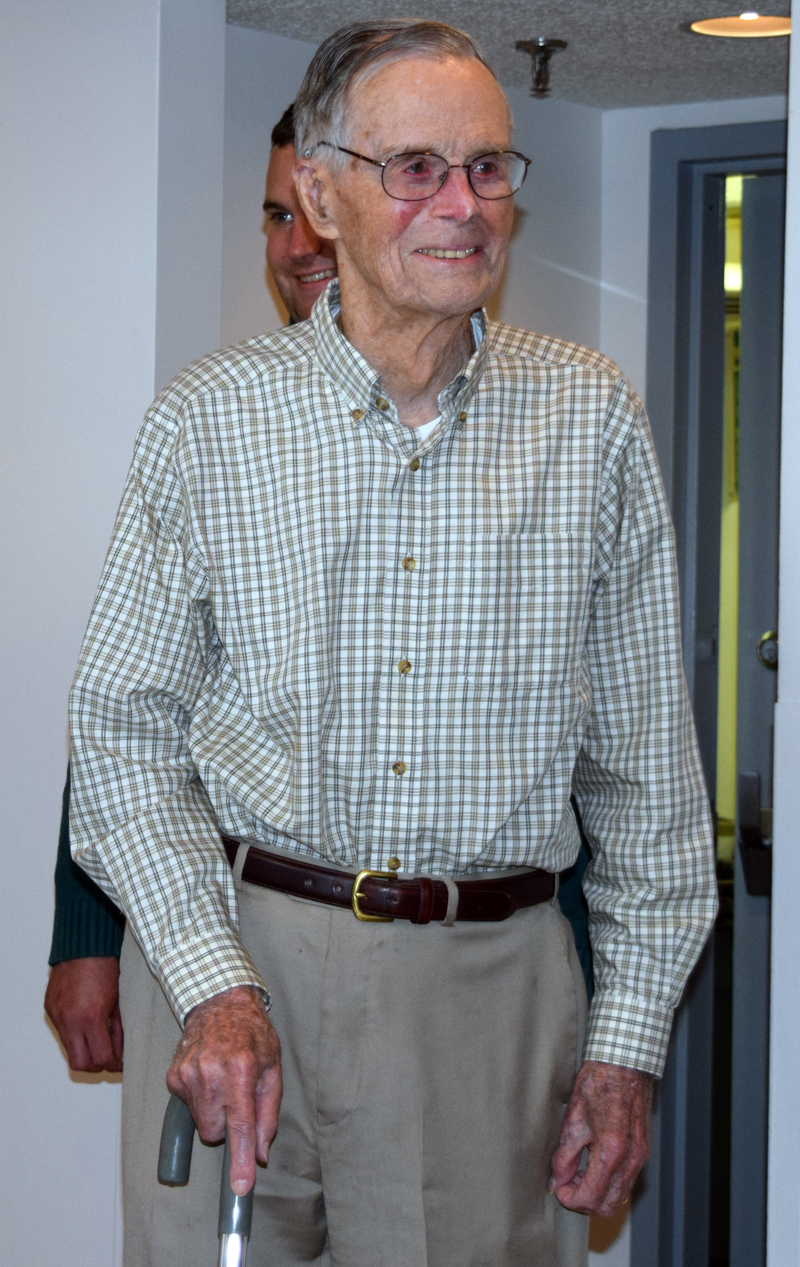 Harry Emmons celebrated his 100th birthday with family and friends at his home, Schooner Cove in Damariscotta, Friday, June 9.

Emmons was born in Jamesburg, N.J. on June 9, 1917. He grew up there as an only child during the Great Depression. His father was an accountant with the American Tobacco Co., so his family was OK, but he witnessed extreme poverty in the community.

A family with six children lived across the street from the Emmons family. The father was a truck driver for a lumberyard, but with little to no construction going on, “they were in really rough shape,” he said.

People helped each other, Emmons said, but times were bleak, especially from the stock market collapse in 1929 until the election of President Franklin D. Roosevelt in 1932 and the launch of the New Deal.

Under FDR, the Works Progress Administration built a high school and other projects in the area. “They did a whole athletic field by pick and shovel to get people to work,” Emmons said.

As a boy, Emmons played baseball and basketball, was a Boy Scout, and enjoyed school dances. After high school, he attended Rutgers University and earned a Bachelor of Science degree in electrical engineering.

He went to work for General Electric and stayed there until his retirement at the end of 1982. He married Doris McNulty in 1943 and moved to the Boston suburb of Winchester in 1946.

Emmons worked with big companies and utilities around New England during his career. His last job before retirement was a $100 million project to bring power from Hydro Quebec dams in Canada to Massachusetts and elsewhere in New England.

In retirement, Emmons traveled the world with Doris. “Traveling was her obsession,” he said. The couple went to Europe six times and the Caribbean three times, as well as to Alaska, Hawaii, and the Rocky Mountains of both the U.S. and Canada.

Back home, Emmons was the vice president of the senior center in Winchester and was active in his church.

Harry and Doris had been married 54 years at the time of her passing in 1997. Harry stayed in Winchester until five years ago. He was 95, and he and his only child, Bob Emmons, of South Bristol, decided it was time for him to be nearby.

A technologically savvy 100-year-old, Emmons likes to stay in touch with family and friends via email and watch movies on Netflix. “I do a lot of work on my computer,” he said. “I write a lot of letters, do email, look at news, all kinds of things.”

He goes to lunch with his son every week, goes to breakfast with his son and grandson every Saturday morning, and the whole family comes over for dinner regularly.

He enjoys the activities and the community at Schooner Cove, a retirement community on the Damariscotta River. He likes the weekly live music and the trips Schooner Cove organizes for residents.

“I have a lot of friends here,” he said. He gathers with a half-dozen friends for a weekly cocktail hour. He’s also a regular at the community’s BYOB gatherings each Friday.

“I say if I can’t have my own house, this is next best,” he said. “I’m near Bob, near Lee, and that’s the important thing in my final years.” His grandson, Lee Emmons, lives in Newcastle.

Reflecting on the changes of the last 100 years and what the future might hold, Emmons noted the rapid advances in technology in the last 25-30 years. “I think the next 25 years will be absolutely unbelievable, with artificial intelligence and all kinds of things,” he said. 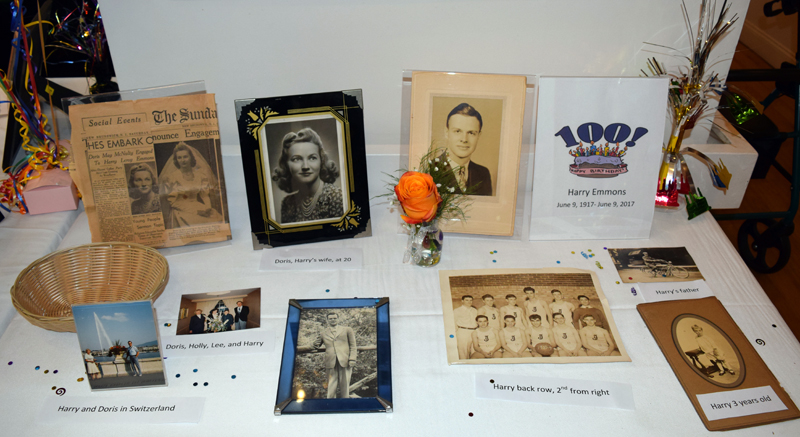 A table at Harry Emmons’ 100th birthday party includes photos from his life, as well as his engagement and wedding announcements. (J.W. Oliver photo)

Emmons’ maternal grandparents lived on a farm in New Jersey. The only time they had contact with other people was at church on Sundays. Now people communicate instantly around the world, and they travel more too.

“I don’t think my parents left the state of New Jersey until they were retired,” Emmons said. “Today kids go all over the world.”

He offered some advice to younger generations – on education, finances (“save your money”) and marriage.

“I had a very good marriage,” he said. “Not a perfect one – there’s no such thing. But it was as good as it gets in the real world.”

“When I was a kid, people in my town were married that shouldn’t have been married,” he said. Some husbands and wives didn’t speak to each other. Now he sees a shift to the opposite extreme, as young couples quickly divorce over trivial conflicts.

“People have to realize to compromise somewhere along the line,” Emmons said. “We all have to put up with quite a bit in marriage, but people are different. They have different perceptions, different ideas about things. That’s normal.” 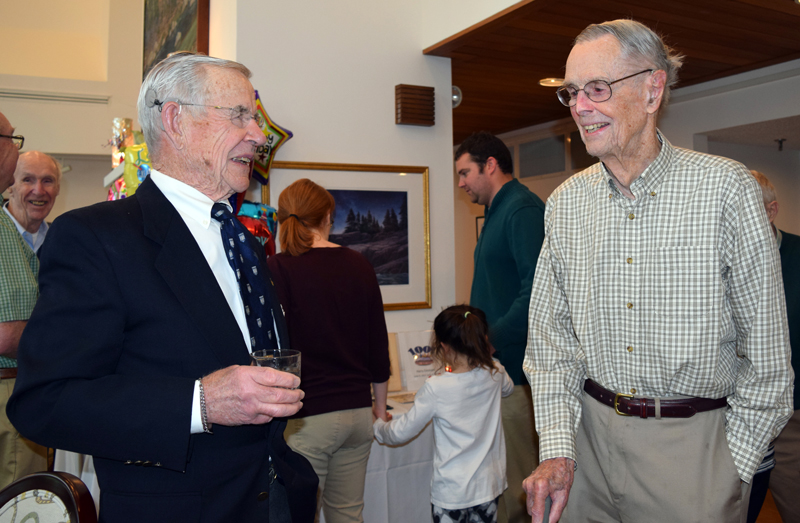 Alice McAdams, Schooner Cove’s longest-tenured resident with more than 25 years there, was one of the many friends and well-wishers present to celebrate with Emmons.

“Harry is amazing in that he still has his mind and is a sensible person and conducts himself well,” McAdams said. “He’s got a sense of humor and is a pleasure to be with.”

Emmons credits his longevity to a mix of genes and lifestyle. His mother lived to the age of 97.

“I exercise a lot and eat a good diet and lead a good life, a happy life,” he said. “Half of it is probably genes and half is the environment you’re making.”