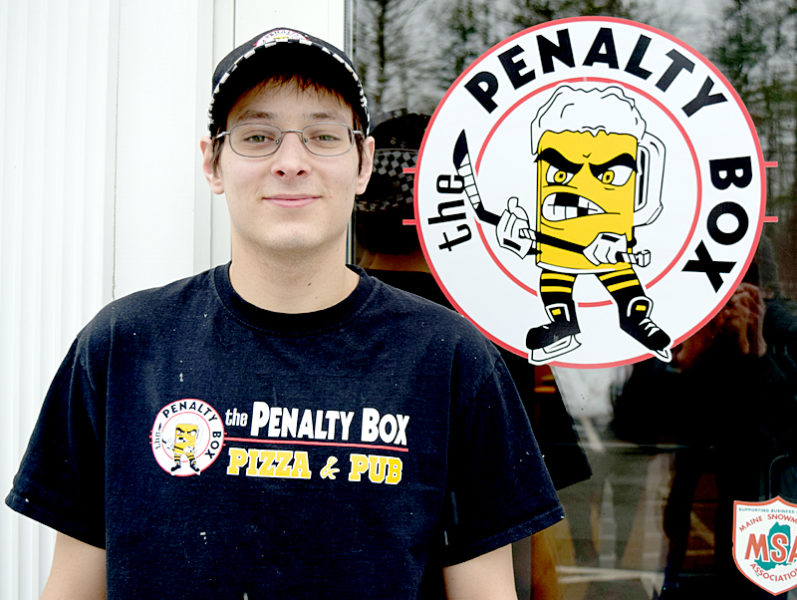 Jeremy Barter, a cook at The Penalty Box in Damariscotta, found a deposit bag containing more than $1,000 in cash near the restaurant Sunday, Dec. 18. The cash is back with its rightful owner, Dunkin’ Donuts, earning Barter praise from Dunkin’ Donuts management and local police. (J.W. Oliver photo)

A cook at The Penalty Box in Damariscotta gave an early Christmas present to Dunkin’ Donuts when he found a Dunkin’ Donuts deposit bag containing more than $1,000 in cash.

Jeremy Barter, of Damariscotta, was arriving at The Penalty Box to begin his shift around 11 a.m., Sunday, Dec. 18, when he spotted what looked like a purse face-down in the mud behind Dunkin’ Donuts, across the parking lot from the restaurant where he works.

The item turned out to be a First Federal Savings deposit bag with the initials D.D. on it. Barter brought the bag into The Penalty Box and called the restaurant’s co-owner and general manager, Jane Gravel, who called the Damariscotta Police Department.

Officer Erick Halpin picked up the bag from the restaurant and later returned it to Dunkin’ Donuts.

Earlier Sunday morning, a Dunkin’ Donuts employee had left to deposit the money at the bank, according to the shop’s co-manager, Cassie Cailler. The worker was carrying drinks out to her car, so she was holding the deposit bag under her arm when she apparently dropped it.

The employee immediately called her manager when she realized the money was missing. “She was super upset,” Cailler said.

“Thankfully someone trustworthy picked it up and brought it back,” Cailler said. “That was awesome,” she said, and “a big relief.”

Barter said the thought of keeping the money never occurred to him. “I didn’t even count it or anything,” he said.

“That kid did a great thing,” said Sgt. Jason Warlick, of the Damariscotta Police Department, who fielded the initial call from The Penalty Box. “That’s honesty at its best.”

“It’s just another example of the integrity the citizens of Damariscotta have,” Warlick said.