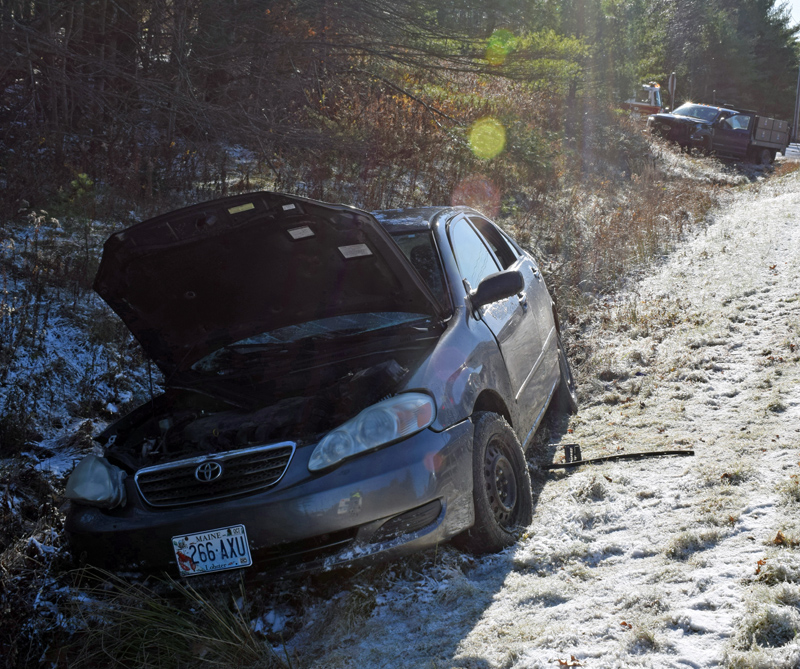 The driver of a Toyota Corolla sedan was flown to Maine Medical Center in Portland with life-threatening injuries after a collision with a Ford F-450 truck (background) at the intersection of Route 1 and Belvedere Road in Damariscotta the afternoon of Wednesday, Nov. 13, according to police. (Evan Houk photo)

A Damariscotta man was flown to Maine Medical Center with life-threatening injuries after a crash at the intersection of Route 1 and Belvedere Road the afternoon of Wednesday, Nov. 13.

Eric J. Palangi, 67, of Damariscotta, was in critical condition as of Tuesday, Nov. 19, according to a spokesperson for the Portland hospital.

Palangi was driving a gray 2006 Toyota Corolla east on Belvedere Road, attempting to cross Route 1 in the direction of Main Street, according to Damariscotta Police Chief Jason Warlick. Amanda Yates, 39, of Rockland, was driving a black 2017 Ford F-450 north on Route 1.

An initial investigation and witness reports indicate that Palangi did not yield to Yates and drove into the path of the truck, according to Warlick. The front end of the truck struck the passenger side of the car.

Damariscotta firefighters clean up after a collision at the intersection of Belvedere Road and Route 1 the afternoon of Wednesday, Nov. 13. A Damariscotta man suffered life-threatening injuries, according to police. (Evan Houk photo)

A LifeFlight helicopter flew Palangi to Maine Medical Center. Yates was taken to LincolnHealth’s Miles Campus in Damariscotta for complaints of pain.

The vehicles were out of the road, and two-way traffic continued during the response. The Damariscotta Fire Department directed traffic.