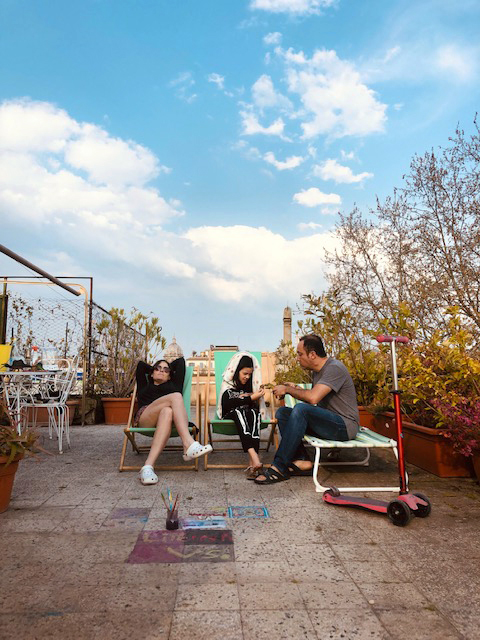 From left: Damariscotta native and opera singer Kate Aldrich relaxes with her 9-year-old daughter, Livy, and husband, Riccardo Minasi, on the roof of the couple’s home, which overlooks a piazza in Rome. Aldrich and her family have been living under lockdown in Italy since March 10. (Photo courtesy Kate Aldrich)

Damariscotta native and world-renowned opera singer Kate Aldrich has been in the middle of Italy’s country-wide lockdown with her husband and 9-year-old daughter since it began the evening of March 10.

Aldrich, in a phone interview March 17 from her home above a piazza in the Italian capital of Rome, said Mainers should prepare to be “home a lot” as the coronavirus continues to spread across the U.S. and the globe.

“It’s not always going to feel normal and great, but it’s not bad either,” Aldrich said, noting that her experience essentially sheltering in place has felt like a winter hibernation period.

Aldrich said the country began to slowly shut down the week prior to March 10, when her daughter’s school closed, before a full lockdown was put into place.

Now all nonessential movement is banned inside the country and all businesses not deemed essential to the nation’s supply chain have been ordered to close.

Among the businesses permitted to remain open are grocery stores, banks, pharmacies, and post offices.

In a follow-up phone interview Monday, March 23, Aldrich said the lockdown measures had grown even stricter since March 17, with only one person from each household allowed to leave a single time each week for groceries, medicine, or other health essentials.

Aldrich said it is widely thought that the measures will remain in place until at least May 1.

She said no visits to other residences are permitted; they cannot even visit her husband’s mother. Leisurely outdoor walks or recreational jogs are no longer permitted either.

People are expected to stay in their zones, or geographic areas close to their homes, Aldrich said.

Aldrich’s husband, Riccardo Minasi, has been stopped by Italian policemen three times while walking on the street. In these instances, people in Italy must produce a written notice stating their address, where they are going, and why. If they do not, stiff fines can be issued.

Italian Prime Minister Giuseppe Conte recently raised the fines for people leaving their homes to up to 3,000 euros ($3,225) from a previous maximum of 206 euros. 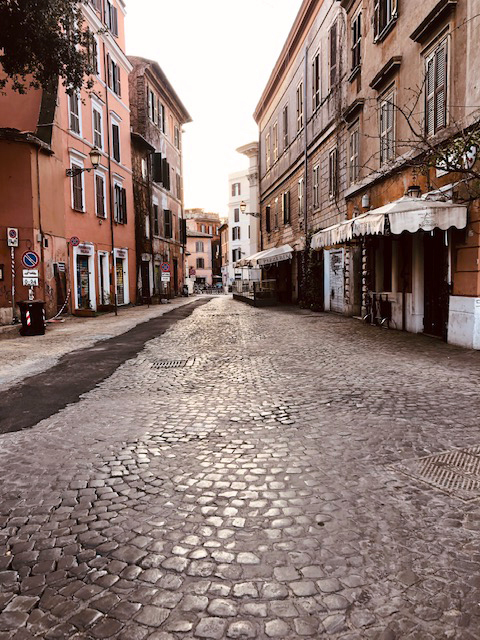 An empty street in Rome. Italy is under a nationwide lockdown to slow the spread of the coronavirus. (Photo courtesy Kate Aldrich)

She said that when going to a grocery store in the morning, most of the morning will be spent waiting in line to enter the store with everyone distanced at least 2 meters (about 6 feet) apart, since only a certain number of people are allowed in the store at one time.

However, she said Italy has not experienced the amount of “panic purchasing” that has occurred in the U.S.

“The stores, and all the major services, are still open, and they’re being stocked every day,” Aldrich said.

Aldrich has been living in Italy off and on for the past 20 years and in Rome for 12, singing opera around Europe.

Now, her days are spent homeschooling her daughter, gardening, cooking, cleaning, working out, doing crafts, building puzzles, and hanging out on her home’s rooftop in the mild spring weather.

She said a silver lining to being stuck at home is getting to spend more time with her husband, since the two are usually on the road for their careers and not usually home together at the same time.

Aldrich said the lockdown has gotten easier as she has developed a routine through homeschooling her daughter, Livia Minasi, and keeping busy with various activities.

She said it helps to remember the lockdown situation is temporary.

“If you told the two weeks ago version of me that this would be happening right now, I would think it was insane. But when you’re actually living it, it’s really not so terrible. That’s how we’re living it. You have to make the choice to roll with it. There’s really nothing else you can do,” Aldrich said.

Aldrich  did note that small businesses and independent contractors are being harshly affected by the nationwide shutdown and resulting economic standstill.

“There are businesses that are not going to make it through this, for sure. And there are people who are struggling to get to the end of the month through this circumstance. So, it’s not all roses,” Aldrich said.

Despite her profession as an opera singer, Aldrich said she hasn’t yet joined in the type of balcony singing among homebound Italian residents that has been captured in videos on social media.

She said that on the rooftop at night, music can sometimes be heard coming from other homes.

Italy has been the country hardest hit so far by the spread of COVID-19, the respiratory illness caused by the coronavirus, with 6,077 fatalities, according to the latest data from the World Health Organization.

There are currently 63,927 cases of COVID-19 in Italy. The country has seen the highest single-day death toll of any country with 793 on Saturday, March 21.

However, officially registered new infections rose only 8% on Monday and Tuesday, the lowest increases since Italy recorded its first COVID-19 death on Feb. 21.