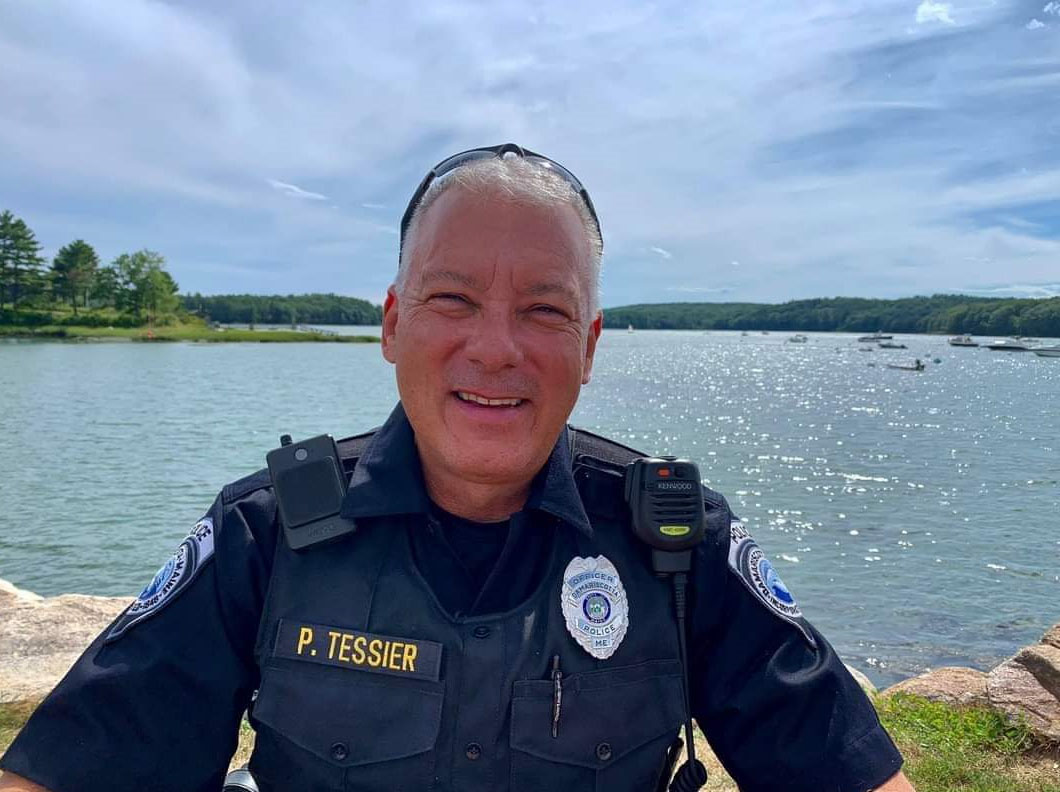 Damariscotta’s newest patrol officer brings two careers worth of experience, as a veteran of the U.S. Air Force and of law enforcement in South Carolina.

Phil Tessier grew up in Manchester, N.H. and graduated from Manchester Memorial High School before joining the Air Force. He earned associate and bachelor’s degrees in criminal justice from St. Leo University while in the service.

For the first half of his 20-year career in the Air Force, he served as a law enforcement officer on bases in Germany, North Dakota, and Belgium.

He spent the next six years as a recruiter, with his first posting back home in Manchester. In search of free advertising, he went on a morning show at a local rock station.

He met a DJ there with the on-air name Roxanne Rhodes. She gave him a business card that day with her phone number on the back — he still carries it today.

Before they married, Rhodes — real name Kathleen Goetzman — extracted a promise that they would someday move to Maine, where she had often vacationed.

In 1991, the Gulf War had started and the possibility of deployment loomed. The couple had planned a September wedding, but quietly wed on Valentine’s Day instead.

The war soon ended and they went ahead with the September ceremony. Only two other people there knew they were already husband and wife.

Tessier continued his work as a recruiter in Malden, Mass. and Brooklyn, N.Y., then ended his service with four years as a computer network administrator in South Carolina.

He retired as a technical sergeant in 1999. The same year, he graduated at the top of a 72-person class from the South Carolina Criminal Justice Academy and started his career with the Richland County Sheriff’s Department.

The county includes Columbia, the capital of South Carolina, and has a population of more than 400,000. The sheriff’s department has more than 700 officers.

Tessier served as a patrol deputy and patrol sergeant for 10 years, then moved into the Civil Process Division and rose to the rank of lieutenant.

Several years ago, Tessier and Goetzman started to vacation in Maine two or three times a year — first around the state, then in the Midcoast, then, drawn by its beauty and the friendliness of its people, in Lincoln County.

“Every time we came on vacation it got harder to leave,” Tessier said.

In March 2020, the couple bought a 41-acre farm in Whitefield with a 220-year-old house. They did not plan to move right away, but found themselves wondering why.

“We looked at each other and said, ‘We’re not getting any younger. Let’s go!’” Tessier recalled.

He retired from the sheriff’s department in June 2020, after 22 years.

Within two weeks of the move, he joined the Damariscotta Police Department as a reserve officer. Soon thereafter, a full-time patrol spot opened.

“I can’t see myself not working,” Tessier said. “I enjoy work.”

Law enforcement is “all I’ve ever wanted to do, ever since I was a kid,” he said. He has never liked to sit at a desk. “I just like being out, meeting people, interacting with people, and helping,” he said.

It was a big change from a large agency in a Southern city to one with five full-time officers in rural Maine. But it was a good change for Tessier, who said Damariscotta is a perfect fit.

He is in the process of transferring his certification as a law enforcement officer to Maine. He has to complete courses on accident investigations and emergency vehicle operations to finish the process.

He spends most of his off time doing chores on the farm. The barn needs some work, which he plans to start soon.

Last week, on Valentine’s Day, Tessier and Goetzman celebrated the 30th anniversary of their secret wedding by renewing their vows in that 130-year-old barn.

Promise fulfilled, Tessier is relishing in his new life.