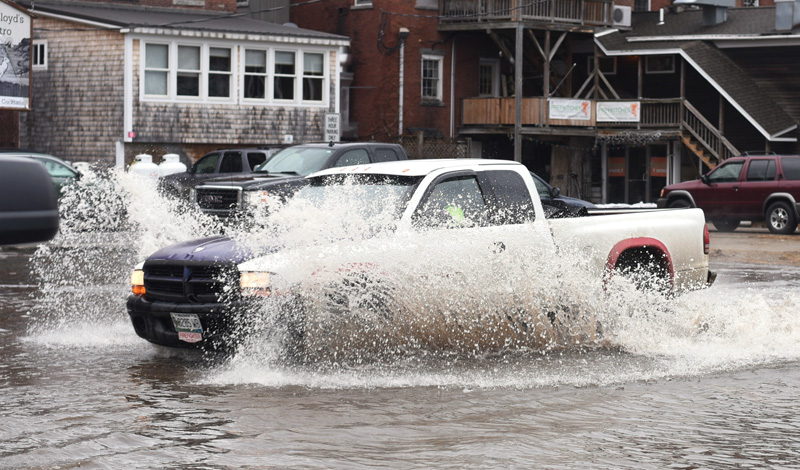 A truck drives through floodwaters in the municipal parking lot in downtown Damariscotta on Friday, March 2. (Jessica Picard photo)

The municipal parking lot in downtown Damariscotta flooded for the second time in two months during an astronomical high tide Friday, March 2.

The high tide, at around 11:25 a.m., combined with strong winds, caused water from the Damariscotta River to flow into the parking lot, and for water to come up from the drainage system.

The water “comes back up the culverts underneath the parking lot and forms a big pool, mainly in three spots of the parking lot … there are a lot of differences in elevation in the parking lot,” Damariscotta Emergency Management Director Steve O’Bryan said.

Around 8 a.m. Friday, Damariscotta firefighters, along with local business owners, prepared for the flooding by filling and stacking sandbags in front of the businesses bordering the parking lot, in an attempt to prevent water damage to the buildings. 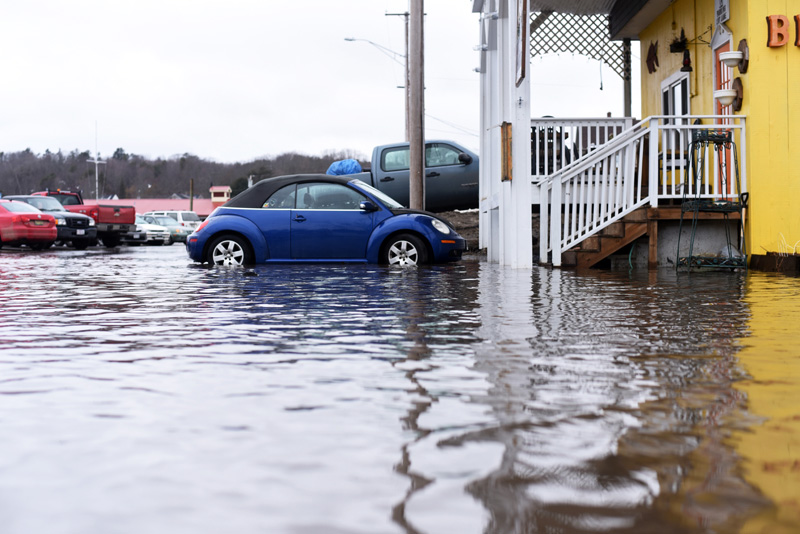 The water reaches the steps of Van Lloyd’s Bistro in the municipal parking lot of downtown Damariscotta on Friday, March 2. (Jessica Picard photo)

“The sandbags are what kept it out of the basement of the Damariscotta River Grill,” O’Bryan said.

Rick Hirsch, owner of the Damariscotta River Grill, watched the water rise from behind the sandbags placed in front of his business that morning.

“It looks like the sandbags are working,” Hirsch said.

The town has plans to reduce the recurring flooding, including the reconstruction of the parking lot, the rebuilding of sanitary and storm drainage systems, and the construction of a 3 to 3 1/2-foot seawall.

The town decided about a year ago to phase the improvements, Damariscotta Town Manager Matt Lutkus said. 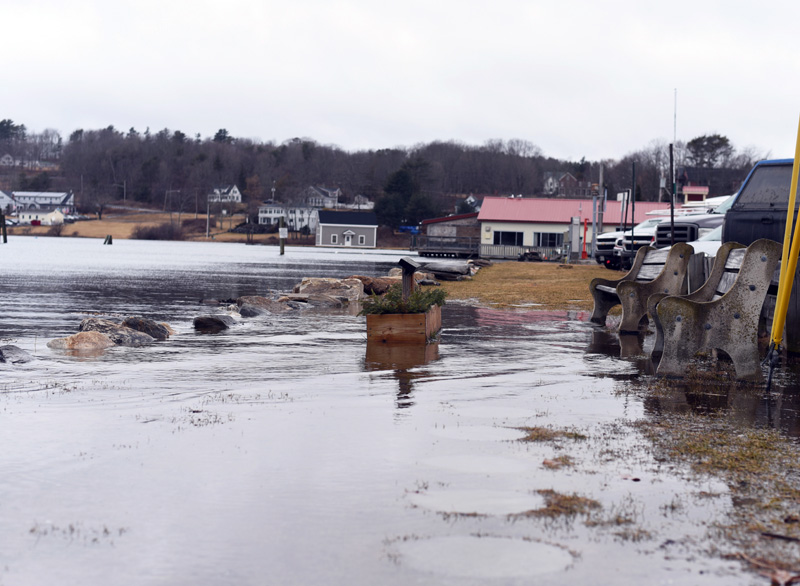 “One of the first steps when some funding becomes available will be to replace the deteriorated storm drains with new drains that have back-flow devices on them. With few exceptions, when the parking lot floods, it is caused by tidal waters coming up through the drains,” Lutkus said.

Meanwhile, local business owners are taking the flooding in stride and doing what they can to prevent damage to their businesses.

“At this point I’m used to it,” said Meredith King, owner of Van Lloyd’s Bistro.

Neither King nor O’Bryan knew of any damage as a result of the flooding, and both said the flooding happens fairly often.

“If it gets worse, it will start to affect other areas,” O’Bryan said.