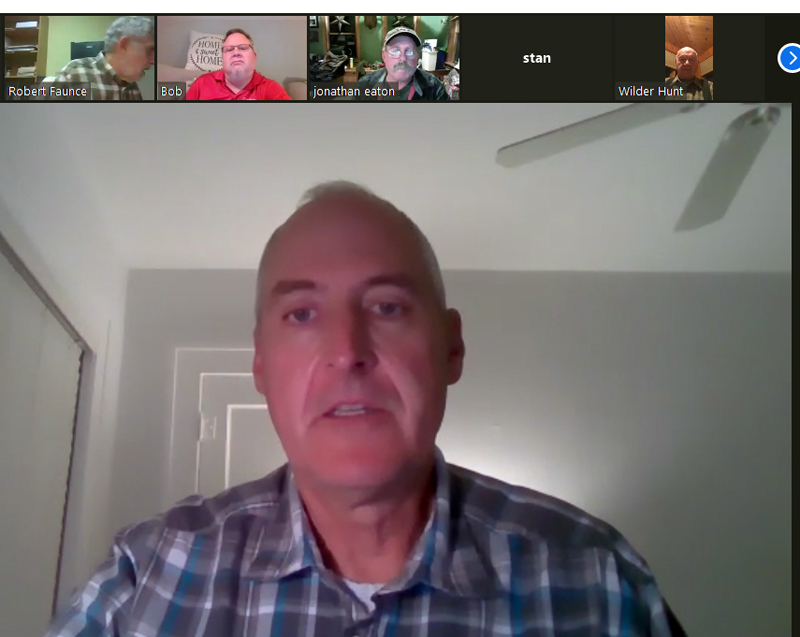 Michael Noetzel addresses the Damariscotta Planning Board and the public during a hearing about his plans to open a recreational cannabis storefront and grow site at 639 Main St., Monday, Jan. 4. The planning board unanimously approved his application after the hearing. (Screenshot by Evan Houk)

The Damariscotta Planning Board unanimously approved a site plan review application for a recreational cannabis storefront and Tier 2 cultivation facility at 639 Main St. on Monday, Jan. 4.

Three neighbors to the property voiced concerns at a public hearing Monday, all of which were addressed by the property owner and applicant, Michael Noetzel, who represents MSN Enterprises LLC.

Noetzel pledged to work with all his neighbors to eliminate or limit any disruptions from his venture that may occur in the future.

Bob Dodge spoke during the Zoom meeting on behalf of his father, Calvin Dodge, who lives and runs an antique shop on abutting property to the south.

Bob Dodge said his father has concerns about lights from vehicles shining into his windows and creating glare.

The parking area, which includes eight regular parking spaces, will be set up along the line next to the Calvin Dodge property, where cars will face his house to the south.

One handicapped parking space will be directly in front of the shop. The planning board granted a waiver for the handicapped spot because it is within the 50-foot setback from Main Street.

Noetzel said he did not think glare would be an issue, since his parking lot is at a lower grade than the windows in Calvin Dodge’s house.

The planning board included a condition of approval that the potential glare issue be revisited in the spring with an on-site review between Calvin Dodge, Noetzel, and Damariscotta Code Enforcement Officer Stan Waltz.

Bob Dodge congratulated Noetzel on behalf of his father, saying Calvin Dodge is happy someone is moving into the property and will be maintaining it.

“He thinks it’s a benefit to the neighborhood,” Bob Dodge said.

Patti Whitten, who lives across the street from the site, expressed concern about the odor mitigation system that will be installed, saying Noetzel did not submit a professionally engineered design as he promised in the initial application.

Town Planner Bob Faunce required Noetzel to provide more information about the system before approval, and Faunce said he was satisfied with the plan.

Hannah King, a lawyer with Drummond Woodsum who specializes in Maine cannabis law, said the odor mitigation plan submitted to the planning board will be more than adequate to eliminate any odors. King said the system was recommended by Active Filtration, an Iowa-based manufacturer of air purification systems.

The system will use an Active Filtration AF-3000S carbon and MERV-11 filtration system to filter out odors and recycle the air back into the cultivation facility.

According to the applicant’s odor mitigation plan, “the key to odor control is controlling the airflow leaving the building envelope and eliminating the airborne microbials and pathogens.”

Whitten thanked Noetzel for his willingness to work with his neighbors and the planning board for recognizing that the area around 639 Main St. still functions as a residential neighborhood, despite being in the Commercial 2 district.

“Those of us who are the closest abutters have been here before zoning came into being. We did not buy a commercial property. So, I appreciate the fact that the planning board is sensitive to that,” Whitten said.

Clayton Giggey, who also lives across the street from 639 Main St., voiced various concerns, including concern about overflow parking.

Giggey said he is worried that during a busy summer season, the nine parking spaces might not be enough, necessitating parking on Main Street and potential damage to his yard and stone wall, which he has experienced before.

“I just want the applicant and the town to be aware that I’m sensitive to the damage that has been done to my property,” Giggey said.

Faunce said the nine spaces are more than the town requires.

Will Gartley, of Gartley & Dorsky Engineering & Surveying Inc., the firm preparing renovation plans for the building on the property, said there is room behind the building to add more parking if necessary.

The building, currently a residence with an attached barn and garage, will be converted into the storefront and cultivation facility.

The barn will remain the same, with the garage serving as the cannabis grow house. Half of the residence will be converted into the storefront and half will remain a residence for those working at the store, Noetzel has said.

Renovations are expected to begin early this year.

The Maine Department of Transportation has approved plans to create a new 24-foot entrance to the property, according to Alyssa Pulver, of Gartley & Dorsky. As part of the entrance work, Noetzel plans to remove some bushes along the road, plant new vegetation, and install a split-rail fence.

The application for the storefront and grow site now needs approval from the Damariscotta Board of Selectmen.

Damariscotta’s adult-use, or recreational, marijuana ordinance allows two recreational shops. The 639 Main St. location would be the second, after Coastal Cannabis Co. LLC, now open behind Hilltop Stop. If one store closes, another could open with town approval.

The ordinance allows three Tier 2 cultivation facilities, defined as facilities with less than 2,000 square feet of plant canopy. The facility at 639 Main St. would be the first licensed grow operation in Damariscotta.