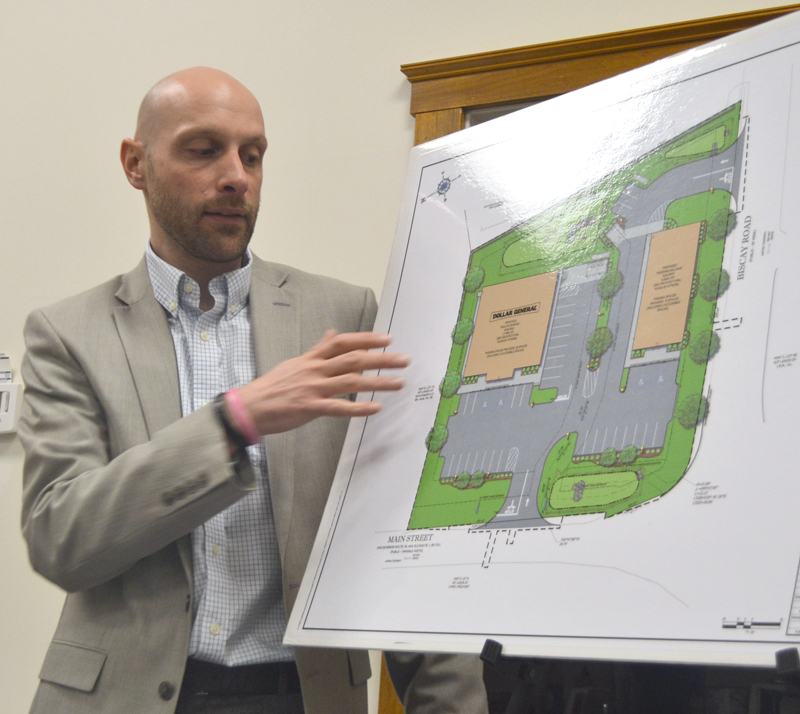 Two months after the applicant’s first appearance before the board, a developer received conditional approval from the Damariscotta Planning Board to build a Dollar General store and a Sherwin-Williams store at the intersection of Main Street and Biscay Road.

The board voted 2-1 to approve Damariscotta DG LLC’s application during its meeting Monday, April 3. Bruce Garren and Shari Sage voted in favor of the project with Stephen Cole opposed.

Wilder Hunt, the acting chairman of the meeting, did not vote. Chair Jonathan Eaton was absent.

Austin Turner, a civil engineer with Bohler Engineering, and John Scribner, a developer at Lisciotti Development Corp., represented the applicant before the planning board.

Damariscotta DG LLC, a legal entity created by Lisciotti Development Corp., submitted a site plan application for the development of the 1.8-acre property at the corner of Main Street and Biscay Road. The property will be divided into two lots, with a 7,500-square-foot Dollar General store planned for one lot and a 4,500-square-foot Sherwin-Williams store planned for the other.

Carl Poole owns the property, but an agreement is in place for the developer to buy it, Turner said.

The board also voted unanimously to grant the waivers requested by the developer for the property, including a waiver regarding the number of parking spaces required for the Dollar General store.

Another waiver approved by the planning board will allow the developer to place the parking lots at the front of the building, facing Main Street. The town’s site plan ordinance calls for parking lots to be behind or to the side of buildings in an effort to separate parking areas from the frontage road.

The board also approved a waiver regarding the number and placement of trees on the property.

The other waivers increase the amount of lighting allowed on the property, with the understanding that only four security lights would remain lit once employees leave the premises; allow for a reduction in the width of the sidewalk alongside the Dollar General building, and amend the grade required for the Biscay Road driveway.

The planning board’s approval comes with conditions. Damariscotta DG LLC must obtain permits from the Maine Department of Transportation for two driveways, one on Main Street and the other on Biscay Road.

The planning board also requires the developer to receive a permit from the Maine Department of Environmental Protection for stormwater management.

Once the developer obtains the state permits, the plan must receive approval from the Damariscotta fire chief and police chief.

The final condition of approval imposed by the planning board is the understanding that the developer will work with the town to create a sidewalk plan for the property and set aside funds for the construction of the sidewalk.

During previous meetings, both the planning board and the Damariscotta Board of Selectmen expressed strong interest in the construction of sidewalks as commercial developments move into town.

In addition, Lisciotti Development Corp. will work with the town to determine the cost of the sidewalk and deposit the funds in an escrow account.

If the site plan has to change to satisfy any of the conditions, the developer will return to the board to get approval on the new plan, Turner said.