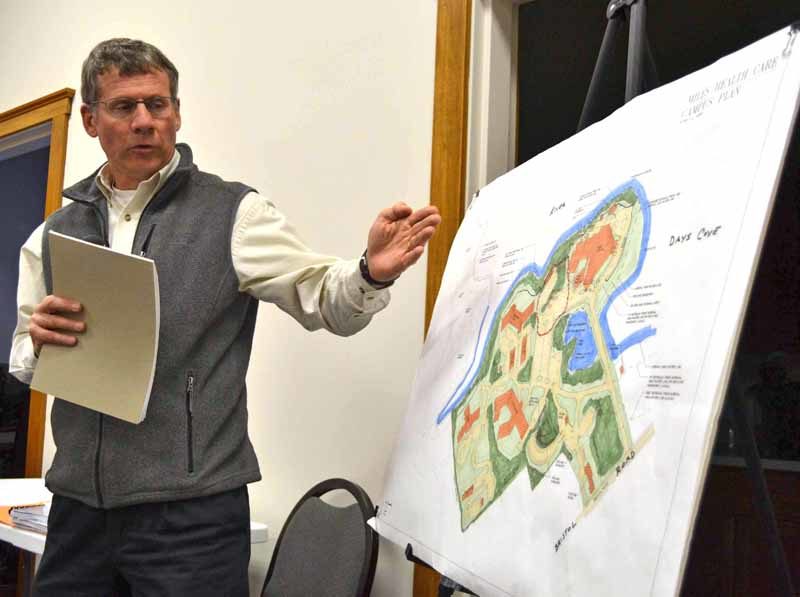 The Damariscotta Planning Board approved LincolnHealth’s proposal for a $13.7 million outpatient health center on the Miles Campus on Monday, Dec. 5.

The outpatient health center will consolidate many of the physicians offices on the Miles Campus into one building between the hospital and Schooner Cove, an independent living facility.

The 2 1/2-story building will be 40 feet tall and built into the side of a knoll. Physicians practices in the Dorothy B. White Orthopaedics Center, the Miles Professional Building, and the Webster Van Winkle Medical Building will move to the new health center.

The building will be built on the site of the Maine Behavioral Healthcare building, formerly the women’s center, and has a footprint of 16,560 square feet, according to Peter Biegel, a landscape architect with Land Design Solutions.

The building will cost $13.7 million, Biegel said. LincolnHealth has approximately $9.7 million saved for the project, and a capital campaign is underway to raise the remaining $4 million. No borrowing is anticipated for the project.

Biegel, along with Charles Rizza Jr., the architect for the project and the director of MorrisSwitzer Environments for Health, presented the project to the planning board during meetings in October and November. Biegel also gave an overview of the project during the public hearing Dec. 5.

Planning board member Bruce Garren recused himself from voting on LincolnHealth’s application. Garren sits on the LincolnHealth Board of Trustees.

Shari Sage, another planning board member, identified herself as an abutter of the project, but the board did not feel she had a conflict of interest.

The board approved the project 4-0.

Rizza said the project would take about 12 months from groundbreaking to occupancy.

LincolnHealth Vice President of Marketing, Development, and Community Relations Scott Shott said the LincolnHealth Board of Trustees will meet in January to decide when the groundbreaking will take place.

“We’re delighted. This has been something we’ve been working on probably since 2009,” Shott said. “We’re very excited about the community support behind the project and the capital campaign.”