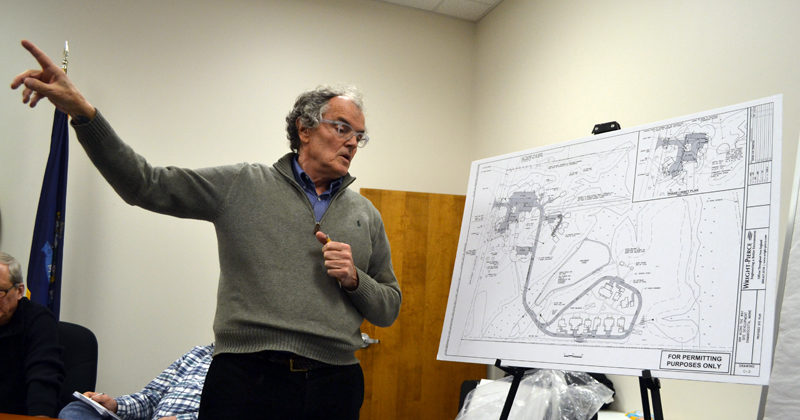 Architect Rick Burt discusses Inn Along the Way’s plans for a senior community during the Damariscotta Planning Board meeting Monday, Feb. 6. The planning board voted unanimously to approve the project. (Maia Zewert photo)

Almost 14 months after purchasing the 31-acre Chapman Farm property at 741 Main St. in Damariscotta, the nonprofit Inn Along the Way Inc. received unanimous planning board approval for its plans to create a senior community.

During a meeting Monday, Feb. 6, the Damariscotta Planning Board approved Inn Along the Way’s application with the condition that the nonprofit return to the board prior to each phase of its project to demonstrate financial capability to complete the development.

Rick Burt, the architect for the development, represented the nonprofit during the planning board’s February meeting. Burt was joined by the vice president of the nonprofit’s board of directors, Tracy Verney; and the board’s treasurer, Timothy Kimpton.

Sherry Flint, the nonprofit’s president, was unable to attend the meeting, Burt said.

Flint and Burt have been attending meetings of the planning board since April 2016 to keep the board up to date on the organization’s plans to build 12 small, environmentally friendly homes for older adults and elders. The units would be built in close proximity to one another to encourage community among those living on the property.

Four additional cottages, known as respite cottages, are planned to provide short-term housing for caretakers. Plans also include a small inn, an art center, a tea room, and a cafe. A portion of the property falls within the town’s C-2 commercial district.

During the planning board’s meeting Jan. 9, the planning board asked Inn Along the Way to provide documentation of its ability to finance the first phase of the development, which would include the construction of a new entrance and the addition of a new wing to a farmhouse on the property. The first phase also calls for the creation of a courtyard, a small garden, a dropoff area, and a small parking area.

In addition, Town Planner Tony Dater asked for a letter from Damariscotta Fire Chief John Roberts about his discussions with the organization regarding fire suppression and the department’s ability to bring fire trucks into the development.

Roberts’ letter was provided to the planning board for the February meeting.

Kimpton gave the board a balance sheet and a letter from First National Bank regarding the nonprofit’s financial capacity to pay for the first phase of the project.

The letter from the bank said the nonprofit’s accounts are in good standing with no overdraft or loan history.

“We may combine phases if we have the funds to do so,” Burt said.

Inn Along the Way is working to determine the cost of the first phase and did not have an estimate to present to the board, Burt said.

The nonprofit currently does not have, and does not wish to accrue, debt. “We want to be able to pay for it as we go,” Kimpton said.

Through a series of votes, the planning board waived the ordinance requirements for plantings for buffers and in the parking lots, as well as curbing requirements.

The board accepted the application as complete, with the understanding the phasing could change as the nonprofit receives funds.

Inn Along the Way must also receive approval from the Maine Department of Environmental Protection. The nonprofit is also working on state and federal wetland permits, according to its website.

During its final motion on the application, the board voted unanimously to approve the project, with the understanding that Inn Along the Way will return to the board with proof of financial capability each time it wants to construct a phase of the development, including the first phase.

Later in the meeting, the planning board approved an application from Lissette Griffin, of 60 Main St., for the construction of a seasonal rental unit, on the condition that Roberts inspects the unit before occupation and Griffin fulfills any recommendations he makes.