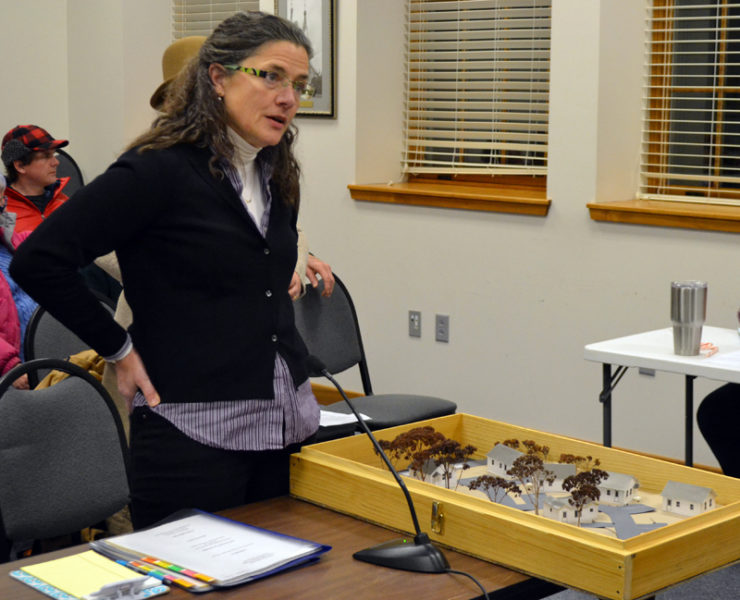 Almost a year after Stepping Stone Housing Inc. presented an updated plan for the development of the Blue Haven property, the Damariscotta Planning Board approved the plan Monday, March 6.

Shari Sage voted against the project. Sage said she disagrees with the board’s previous decision to consider seven residential units on the property “grandfathered.”

Stepping Stone has since downsized its plan from a total of seven units on the property to six.

Stepping Stone’s application calls for the construction of five one-story, two-bedroom units of no larger than 720 square feet each on its property at the corner of Hodgdon and Pleasant streets. The new buildings would replace the structures currently on the property, which the nonprofit will remove as it builds the new ones. An existing one-bedroom cottage will remain on the property.

As part of the conditions of approval, Stepping Stone must return to the board before construction of any of the five buildings to demonstrate financial capability to complete the construction.

In addition, the nonprofit must come to an agreement with Christine Rand, of 50 Hodgdon St., regarding the buffering between the two properties. The neighbors must reach an agreement prior to any construction. In the event they cannot reach an agreement, the planning board will resolve the matter.

Stepping Stone Housing Inc. Executive Director Marilee Harris attended the meeting to field the board’s questions. During a meeting in December, the planning board voted that Stepping Stone’s application was complete, but asked for a few additional documents before the vote on whether to approve the project.

Harris provided the documents to the board during Monday’s meeting. The documents include information about the size and location of a planned sign and a description of the nonprofit’s landscaping plan.

In addition, once all five of the new structures are complete, the nonprofit will have reduced the buildings’ footprints on the property, increasing the amount of green space, Harris said.

Harris also outlined the nonprofit’s plans for the construction of the homes. Stepping Stone plans to build one house within the span of two years. The construction of all five houses could take as long as 10 years.

According to Stepping Stone’s application, the nonprofit would come before the planning board before obtaining each building permit to demonstrate its financial capability to build the home and its compliance with applicable ordinances.

A similar arrangement was agreed upon by the Damariscotta Planning Board and Inn Along the Way Inc., a nonprofit that plans to create a senior community on the 31-acre Chapman Farm property at 741 Main St.

During its meeting in February, the planning board unanimously approved Inn Along the Way’s application with the condition that the nonprofit return to the board prior to each phase of its project to demonstrate financial capability to complete the phase.

The estimated cost for each of the two-bedroom homes is $111,000, according to Stepping Stone’s application.

Abutters to the property have been vocal about their concerns about Stepping Stone’s plans during each of the nonprofit’s appearances before the board.

Prior to the meeting, Sage forwarded the planning board an email the town had received from Jeffrey Prostovich, who owns a home at 11 Pleasant St. In his Dec. 15, 2016 email, Prostovich said he had two phone inquiries about purchasing the property, but both potential buyers “abandoned their interest” after learning about the scope of the Stepping Stone project.

The town received no further comment from Prostovich in the months that followed, Town Planner Tony Dater said.

Harris said she recently spoke to a woman who plans to purchase the property from Prostovich. The woman said she is excited to live next to an organization that is helping people find a place to live, Harris said.

Sage said that while she is happy for this outcome, she believes the presence of Stepping Stone will have an impact on the value of surrounding properties.

Amy Lalime, of 10 Hodgdon St., voiced concerns about the lack of on-site management on the property. The late John Andrews, the property’s previous owner, lived in a house on the property and rented the other buildings out.

“Now there’s no one there watching over (the residents), and that’s the issue,” Lalime said.

Gabe Shadis, of 10 Pleasant St., said that while Stepping Stone’s 1.8-acre property on Biscay Road would be a more appropriate location for the development due to the size of the property, the town also needs to consider the growing percentage of tax-exempt property in Damariscotta.

“You got to ask yourself, is Damariscotta going to benefit from this? Is this a good thing for Damariscotta? Never mind our neighborhood, because we all have our opinions about that,” Shadis said.

Shadis said the neighbors will appeal the project to the Damariscotta Board of Appeals.

“If the appeals board does not see our point of view, we’re fully prepared to go to district court, superior court, and the supreme court of Maine,” Shadis said. “I would think Stepping Stone, being on a tight budget, their dollars would be better spent helping people rather than litigating.”

Shadis previously filed an appeal on behalf of the residents of Church, Hodgdon, and Pleasant streets regarding the board’s decision to accept Code Enforcement Officer Stan Waltz’s determination that the seven units on the property were grandfathered.

During its meeting in October 2016, the board of appeals determined it could not review an appeal until the planning board made a final determination about the entire project.

For an administrative appeal to have standing, the applicant must appeal a decision of either the town’s code enforcement officer or planning board, according to the application.

If the neighbors were to appeal a decision of the Damariscotta Board of Appeals to the court system, the other party in the case would be the town of Damariscotta, not Stepping Stone.