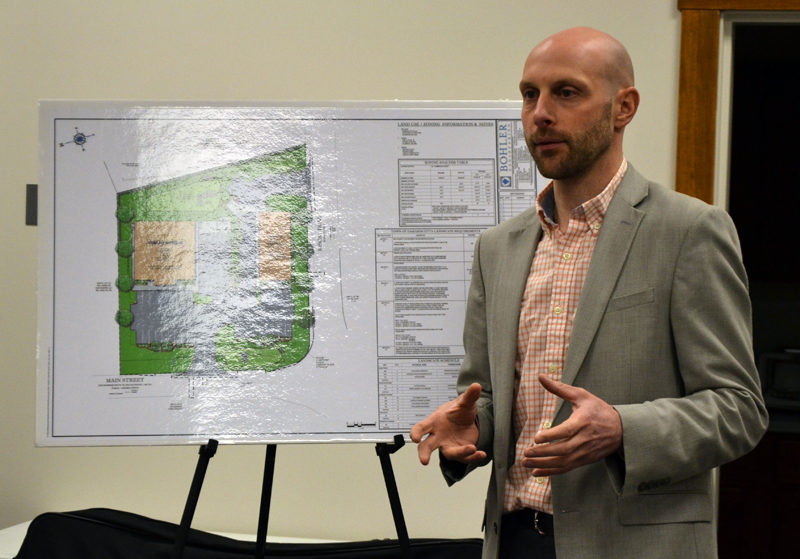 After receiving a letter from the Damariscotta Board of Selectmen expressing safety concerns about a proposal to build two retail stores at the corner of Main Street and Biscay Road, the Damariscotta Planning Board will write a letter to the Maine Department of Transportation seeking the department’s guidance.

The board unanimously voted to direct Town Planner Tony Dater to draft a letter to the DOT, to be reviewed by the board of selectmen, during the planning board’s meeting Monday, March 6.

Robin Mayer, chair of the Damariscotta Board of Selectmen, signed a Feb. 28 letter detailing the selectmen’s concerns about the proposal. The planning board discussed the letter with Austin Turner, a civil engineer with Bohler Engineering who has made presentations about the project before the board, and John Scribner, a developer at Lisciotti Development Corp.

In both the letter to the planning board and during previous meetings, the selectmen have expressed a strong interest in the construction of sidewalks as commercial developments move into town.

The construction of sidewalks on main roads was identified in both the town’s comprehensive plan and the 2008 Damariscotta Sidewalk-Bicycle Plan as a high priority.

During the preliminary site plan review with Turner and Scribner in February, the planning board discussed the possibility of having the applicant make a financial contribution to a future sidewalk project, as there are currently no sidewalks in the area.

According to the letter signed by Mayer, the consensus among the selectmen is that the developer should be required to build the sidewalks on Main Street and Biscay Road at the time the two stores are being built.

The letter also addressed the selectmen’s concerns about safety near the proposed development site. Damariscotta DG LLC’s application currently calls for two driveways, one on Main Street and the other on Biscay Road.

“With regard to traffic safety, we feel that access to the two proposed stores should be on Biscay Road as the access off Main Street that close to the Main/Church/Biscay intersection is unwise given the increased amount of traffic resulting from this development,” Mayer said in the letter.

The letter concludes that while the town needs to work with developers to “help ensure that these businesses are profitable, employ people, and contribute to the local tax base,” it is important that each new development adhere to aspects of the town’s ordinances and community plans to improve existing infrastructure.

Turner said he would be happy to talk with the DOT about the possibility of sidewalk construction, but he does have concerns about the “implied sense of safety” that a sidewalk could give.

Additionally, Turner expressed concerns about a public sidewalk being built on private property. If the developer is going to build a sidewalk, Turner said an agreement regarding the liability for and maintenance of the sidewalk would need to be reached.

The location of the driveway also provides a safe route for delivery vehicles to maneuver into the operations areas, Turner said. In addition, the driveway is in the middle of the lot, allowing customers to drive to either store with ease without having to cross the entire parking lot.

Having two driveways to the property would also allow for easier access for emergency vehicles, Turner said.

Bohler Engineering has had discussions with the DOT about the driveway. As part of its review of the use of the property, the DOT has asked Bohler Engineering to collect data on the traffic to Sherwin-Williams stores at peak times, Turner said.

Both Dater and planning board member Shari Sage asked if the driveway could be shifted toward the north boundary of the property in an effort to put as much distance as possible between it and the intersection. Turner said the layout of the site would need to be reconfigured if the driveway needs to be moved.

The board decided to wait to discuss other aspects of Damariscotta DG LLC’s application until a letter has been sent to the DOT asking for guidance regarding the driveways and the construction of a sidewalk near a state highway.

Turner asked if it would be possible to meet with the selectmen to hear their concerns directly. Dater said he would speak with Town Manager Matt Lutkus to see if a conversation could be scheduled for the selectmen’s next meeting, on Wednesday, March 15.

Damariscotta DG LLC will be on the agenda for the next meeting of the Damariscotta Planning Board, which is scheduled for Monday, April 3.