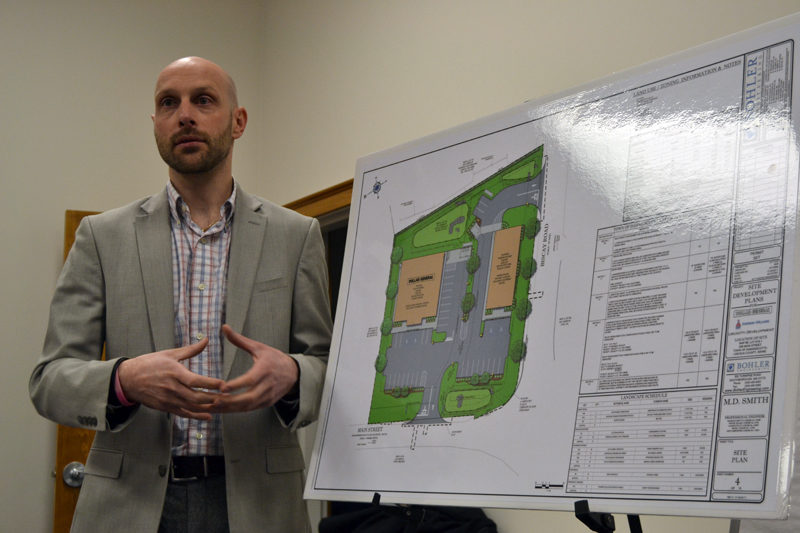 Austin Turner, a civil engineer with Bohler Engineering, discusses Damariscotta DG LLC’s application to develop the 1.8-acre property at the intersection of Main Street and Biscay Road during a meeting of the Damariscotta Planning Board on Monday, Feb. 6. The application calls for the construction of a Dollar General and a Sherwin-Williams store. (Maia Zewert photo)

Damariscotta residents got their first look at a proposal to build Dollar General and Sherwin-Williams stores at the corner of Main Street and Biscay Road during the Damariscotta Planning Board’s meeting Monday, Feb. 6.

Austin Turner, a civil engineer with Bohler Engineering, of Southborough, Mass., made a presentation on the proposed development during the public hearing and planning board meeting. He was joined by John Scribner, a developer at Lisciotti Development Corp., a private real estate developer based in Leominster, Mass.

Lisciotti Development Corp. has developed a number of retail establishments, restaurants, and pharmacies across the country for the past 25 years. In addition to Dollar General and Sherwin-Williams, other clients include Burger King, Starbucks, and Target, according to its website.

Damariscotta DG LLC, a legal entity created by Lisciotti Development, has submitted a site plan application to develop the property.

The 1.8-acre property, currently owned by Carl Poole, is within the town’s C-2 commercial district. Lisciotti Development currently has an agreement in place to purchase the property after it completes due diligence, Turner said.

Dollar General, headquartered in Goodlettsville, Tenn., has more than 12,000 locations in the U.S., including stores in Augusta, Lisbon, and Litchfield.

Sherwin-Williams, headquartered in Cleveland, has more than 4,300 locations worldwide, including stores in Brunswick, Rockland, and Topsham.

During the public hearing, the application drew criticism from some in the audience.

“Has anyone talked about if it’s wanted or not wanted?” Water Street resident Lucy Harrington said. “It doesn’t make sense to me to have five paint stores and three dollar stores within 15 minutes of here.”

Jenny Begin, a Pleasant Street resident, said she doesn’t see how the town could sustain the two businesses, especially during the winter.

“I went into Renys today, and there was not a person there, so I don’t see how the town can support these businesses,” Begin said.

Other members of the audience asked about the distance between the development’s proposed entrance on Main Street and the nearby traffic lights.

Turner said Bohler Engineering is discussing the entrance with the Maine Department of Transportation.

Ed Seidel, a Headgate Road resident, asked how Bohler Engineering plans to manage the stormwater and runoff from the site, due to an increase in impervious surfaces – surfaces that do not absorb stormwater – from the buildings and the parking lot.

Turner said the development has been designed to meet and exceed both local and Maine Department of Environmental Protection requirements for stormwater management and that the topography of the property had been taken into consideration.

After the public hearing, the planning board continued discussion about the development with Turner and Scribner during its regular meeting. Turner explained a series of waiver requests Bohler Engineering included in its application and asked for guidance from the board regarding whether any additional information is needed.

The requested waivers under the site plan ordinance have to do with the location of the parking areas for both stores and the number of parking spaces town regulations would require for the Dollar General location.

The town’s site plan ordinance calls for parking lots to be behind or to the side of buildings in an effort to separate parking areas from frontage roads.

Due to the topography of the property as well as customer convenience, Bohler Engineering requested that the parking lot be in front of the building, which would create separation between customer parking and operational areas, Turner said.

The planning board members expressed approval for the landscaping Bohler Engineering proposed to shield the parking lot from Main Street.

After studying the amount of parking spaces other Dollar General stores typically use, Bohler Engineering requested that the number of required spaces be reduced to 25.

The planning board did not take a formal vote on the waivers, but voiced approval for Bohler Engineering’s requests.

The board also discussed the possibility of the construction of a sidewalk at the front of the property along Main Street.

In June 2008, the Damariscotta Planning Advisory Committee compiled the Damariscotta Sidewalk-Bicycle Plan, which outlined the town’s goals to improve “walkability and bikeability” in Damariscotta. The top priority of the plan was a sidewalk along Main Street to provide a safe means of travel from downtown to Great Salt Bay Community School, the town office, and other businesses.

During the Damariscotta Board of Selectmen’s meeting Wednesday, Feb. 1, the selectmen encouraged the planning board to implement the plan and require all retail projects along Main Street to provide a sidewalk, Town Planner Tony Dater said.

In order to avoid having Bohler Engineering construct a “sidewalk to nowhere” in the event sidewalk construction continues on the opposite side of the street, planning board member Bruce Garren suggested the applicant could make a financial contribution to a future sidewalk project equivalent to what the construction of a sidewalk in front of the property would cost.

The applicant will also need to obtain proper addresses for both of the proposed stores.

The property was originally believed to be 508 Main St. due to the location of a mailbox in proximity to the driveway, Dater said. The mailbox belongs to Women of Substance, which is across the street from the property.

Turner said the development will be on the agenda for the next meeting of the Damariscotta Planning Board, which will take place at the town office at 7 p.m., Monday, March 6.