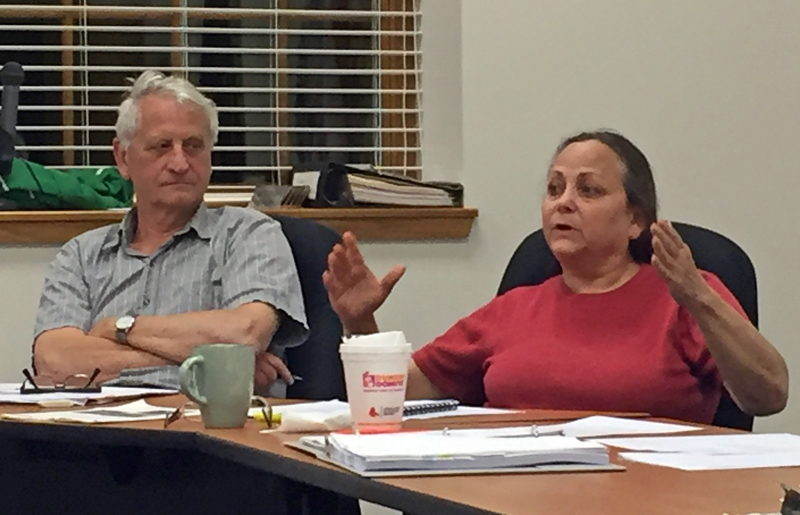 A little over a year after residents approved a sign ordinance, a member of the Damariscotta Planning Board has proposed prohibiting the use of certain electronic signs in the town, as well as the use of graffiti on commercial signage.

Shari Sage, the member proposing the bans, did not define graffiti in her proposal, a point of concern for other board members.

Sage brought up the topics during the planning board’s Monday, July 10 meeting. Town Planner Tony Dater said Sage was bringing her concerns to the board as a resident and not as a planning board member, but Sage remained in her seat at the board’s table for the discussion.

In her presentation of a draft amendment to the sign ordinance that would prohibit the use of graffiti on commercial signage, Sage referenced recent interactions between the planning board and Maine-ly Pawn.

Maine-ly Pawn owner Mark Hoffman erected two plywood fences, one along Main Street and the other facing Great Salt Bay Community School, to screen his merchandise from view and avoid having to obtain a conditional use permit. Hoffman’s son painted graffiti on the fences.

Sage, who has stated her dislike of the fence during previous meetings, said she does not believe graffiti “fits the tone of the town.” The fence facing Main Street has since been removed and is “not an immediate concern,” but other issues with graffiti could come up, Sage said.

The draft amendment Sage presented states that “the ‘art’ form of graffiti shall not be permitted in any commercial signage, no matter the medium used in its design.” The draft states that waiver requests pertaining to graffiti will not be considered.

Jenny Begin, a recently appointed alternate to the board, asked if graffiti inside buildings would still be allowed. She referenced the “outrageously gorgeous graffiti” inside Reel to Reel Music, which opened in Elm Street Plaza this past spring.

Sage said she is concerned with external graffiti signs.

Chair Jonathan Eaton, along with members Wilder Hunt and Adam Maltese, expressed concern about instituting a sweeping ban on graffiti without a clear definition of graffiti.

“It’s just dangerous to say no to graffiti but not have an explanation of what it is,” Maltese said. “It’s a very slippery slope.”

Dater said there are people who view graffiti as art, which could also complicate the creation of a ban.

Sage disagreed and said other municipalities around New England have banned graffiti in order to preserve the tone and ambiance of their towns.

“We need to try to preserve the aesthetics and the tone of the town. We can’t let this stuff just creep in,” Sage said.

Sage also proposed prohibiting all LED signs throughout the town, including electronically changeable signs, which the board integrated into its stand-alone sign ordinance.

The development of the sign ordinance began in October 2015 and underwent multiple public hearings and workshops with input from business owners and residents. One of the main points of debate was the location and illumination of electronically changeable signs.

In a compromise between business owners and those with concerns about the signs, the ordinance was written to allow electronically changeable signs in the commercial C-2 district, which excludes the downtown. The ordinance requires electronically changeable signs in the C-2 zone to be turned down to 50 percent illuminating power or less between 11 p.m. and 7 a.m.

Sage said Damariscotta, like Camden and Freeport, doesn’t need electronically changeable signs as they are all “quaint New England towns.”

Sage echoed her comments during the July 10 meeting and said the town should prohibit the use of LED signs to preserve its character.

“If we don’t stop it now, in 100 years we won’t look like New England anymore,” Sage said. “There’s a lot of value in preserving what we have. A lot of our business is from out of state, and if we don’t respect that and protect what we have here, they won’t come here.”

Sage’s proposals drew mixed reactions from the board.

Hunt said the board had spent “a good amount of two years” developing the sign ordinance and gathering input from local business owners, including Damariscotta Hardware owner Rob Gardiner.

After voters approved the sign ordinance, Damariscotta Hardware installed an electronically changeable sign, which Hunt said is useful and enjoyable.

“If you seriously think Damariscotta (Hardware) is making a nickel more because of that sign … it’s bull honky,” Sage said. She said she doubts the prohibition of electronically changeable and LED signs would make an impact on businesses.

Begin spoke in favor of amending the sign ordinance to exclude some sections of the C-2 zone that are mostly residential, including lots on Chapman and Vine streets, from allowing the electronically changeable and LED signs.

Eaton agreed, and said the intention is to only have the signs along Main Street and not on side streets. Eaton said he did not believe any businesses located on the side streets would install an LED sign, but the topic should be addressed.

After a half-hour-long discussion, Eaton said he would like the selectmen to weigh in on the topic of amending the sign ordinance to prohibit the use of electronically changeable and LED signs on areas other than on Main Street. He also asked Sage to clarify the intent of the graffiti ban and include a clear definition of graffiti.

“A lot of work needs to be done on it before it gets discussed,” Eaton said.

Robin Mayer, the chair of the Damariscotta Board of Selectmen, was in attendance at the planning board’s meeting and reminded the board that a new committee will be discussing similar issues in its meetings. (See “Damariscotta selectmen appoint committee to revisit form-based code” in this edition.)