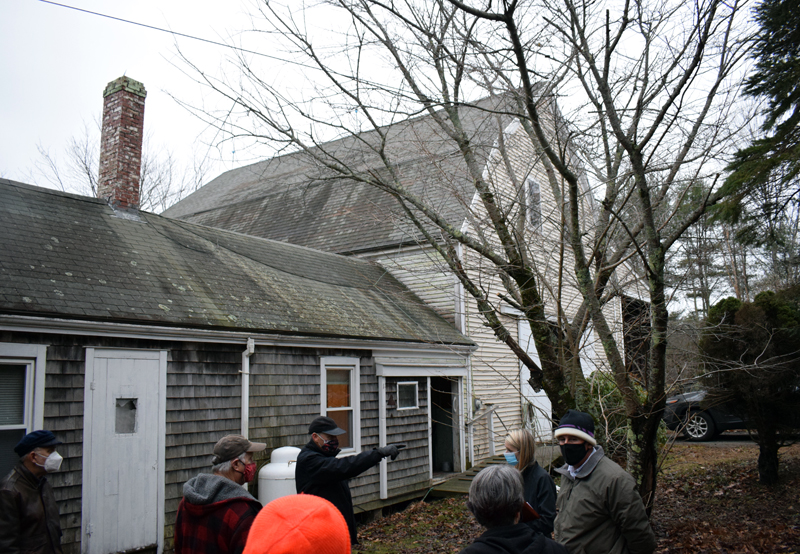 Michael Noetzel (pointing) explains his renovation plans for 639 Main St. to the Damariscotta Planning Board and others during a site visit on Monday, Dec. 14. Noetzel is applying to open a recreational cannabis storefront and Tier 2 cultivation facility at the location. (Evan Houk photo)

The Damariscotta Planning Board and Town Planner Bob Faunce visited the site of a potential recreational cannabis storefront and Tier 2 cultivation facility at 639 Main St. on Monday, Dec. 14.

The property owner, Michael Noetzel, who is representing the applicant, MSN Enterprises LLC, said he plans to enlist investors to run the store and grow operation. He has conditional approval from the state for both endeavors.

Noetzel attended the site visit along with Alyssa Pulver, of Gartley & Dorsky Engineering & Surveying Inc., who is designing the renovations of the building on the property.

The building, currently a residence with an attached barn and garage, would be converted into the storefront and cultivation facility.

The barn would remain the same, with the garage serving as the cannabis grow house. Half of the residence would be converted to a storefront and half would remain a residence for those working at the store, Noetzel has said.

Renovations are expected to begin in early 2021, pending town approval.

Noetzel plans to move the entrance to the property, remove some bushes along the road, plant new vegetation, and install a split-rail fence. The entrance change needs approval from the Maine Department of Transportation because Main Street, also known as Business Route 1, is a state highway.

The plan calls for seven parking spaces, including one handicapped space directly in front of the storefront.

In regard to questions about cannabis odors from the grow house, Noetzel said he plans to have an airtight seal on the facility with a charcoal filtering system and a vent that will release odors into the field behind the building.

Noetzel also addressed a question about overflow parking. He said there is extra space near the planned parking spaces that could serve that purpose, although he doesn’t expect to need it.

The planning board will consider approving the application for the storefront and cultivation facility at its next meeting, at 6 p.m., Monday, Jan. 4.

Damariscotta’s adult-use, or recreational, marijuana ordinance allows two recreational shops. The proposed location would be the second, after Coastal Cannabis Co. LLC, now open behind Hilltop Stop. If one store closes, another could open with town approval.

The ordinance allows three Tier 2 cultivation facilities, defined as facilities with less than 2,000 square feet of plant canopy. The facility proposed for 639 Main St. would be the first grow operation in Damariscotta.