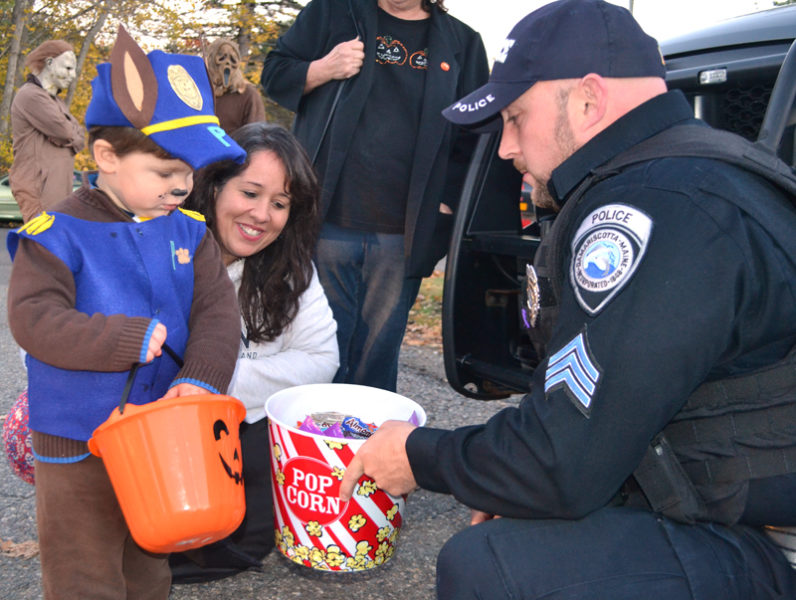 Nicholas Kupstas Jr., of Newcastle, collects candy from Sgt. Jason Warlick during a trunk-or-treat event at the Damariscotta Police Department on Halloween. The department recently received a $600 donation for the event from a Texas man after returning the man’s wallet with more than $1,200 inside. (Maia Zewert photo, LCN file)

The Damariscotta Police Department’s annual trunk-or-treat event received a $600 donation after the department returned a wallet containing more than $1,200 in cash to a man in Texas.

The wallet was discovered this summer in the Christmas Cove area of South Bristol and brought to a local post office. The wallet contained more than $1,200 in cash that had been stapled in the middle.

The individual who found the wallet declined to leave any information and only wanted to make sure the wallet found its way back to its rightful owner, according to the Damariscotta Police Department.

The postal worker who received the wallet is related to Damariscotta Police Officer Jim Dotson and gave it to him to look for the owner.

Kenefick mailed the wallet to Wheeler. In November, the department received a letter from Wheeler and his wife, Jeanene Wheeler, expressing their gratitude for the department’s efforts.

The Wheelers enclosed a check for $600 with the direction that it either be split equally between the department’s five full-time officers and Kenefick or used for the needs of the community.

During the Damariscotta Board of Selectmen’s meeting on Wednesday, Dec. 7, Young asked the selectmen to accept the donation and approve its use for the 2017 trunk-or-treat event.

The department held the first trunk or treat in 2013, and it has grown in popularity each year, Young said.

The annual Halloween event in the parking lot of the police station drew more than 400 children this year. The department had $200 in its budget for the event, and local businesses and residents donated candy for the officers to hand out.

Despite the donations, Young said the event ran out of candy due to the high attendance and more needed to be purchased.

The selectmen approved the acceptance of the gift and the expenditure of the money for trunk or treat.