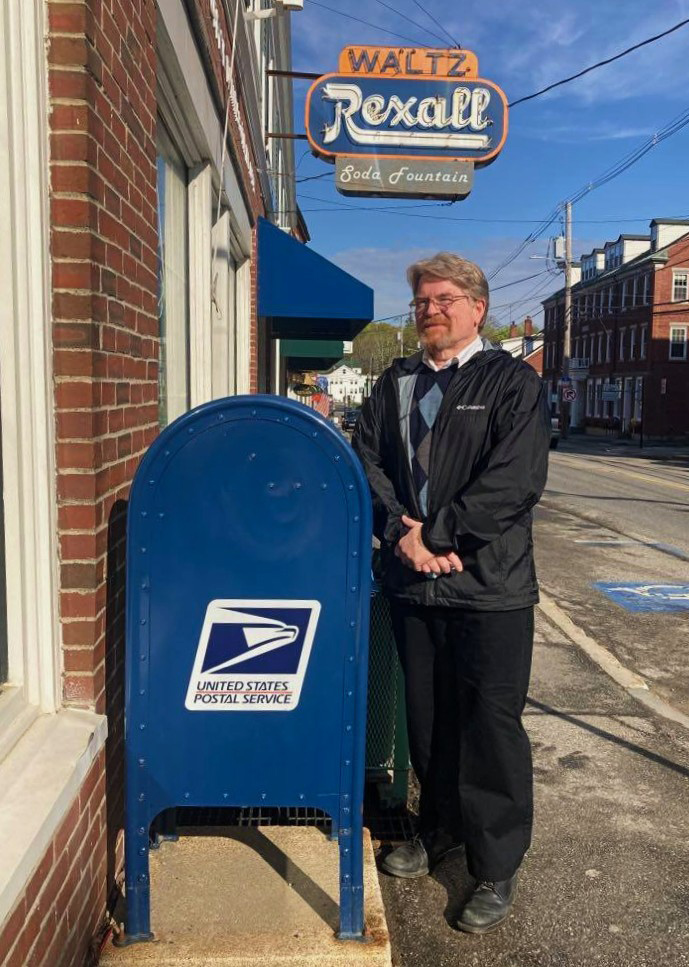 Most everyone in Damariscotta knows Tom Hutchins, the town’s postmaster since 2005.

“I talk to someone familiar every day,” Hutchins said.

On April 30, Hutchins retired from his 16-year career as Damariscotta postmaster — a career he never planned but which in hindsight seems serendipitous.

“I’m actually very introverted,” Hutchins said. “But at work I’m the guy onstage. I know almost everyone by name who comes into the post office, down to the children, the school. It’s really special to make those relationships in the community.”

Hutchins, who grew up on his family’s dairy farm in Edgecomb and now lives in Alna, previously worked for the U.S. Postal Service as a supervisor at the Augusta Post Office and a mail-processing plant in Portland.

“It’ll be difficult to say goodbye, but the U.S. Postal Service has been going through major changes,” Hutchins said. “It’s not the same public service job that it used to be.”

Several years ago, Hutchins was tasked with managing the Bristol and Walpole delivery routes in addition to his duties in Damariscotta.

The duties of a postmaster used to be less hands-on and more managerial. Now, postmasters still have their administrative duties, but also have to do more physical labor and clerical work that used to be done by clerks and mail carriers.

When the Postal Service unveiled a plan to reduce the operating hours of many smaller post offices across the country, including several in Lincoln County, postmasters like Hutchins took on greater responsibility.

Hutchins said the Postal Service did not slow down while the rest of the world locked down early in the COVID-19 pandemic. Online shopping exploded.

“People weren’t just ordering birthday presents. I was delivering heaps of paper towels, toilet paper, dog food — supplies that could be purchased at one of our grocery stores here in town,” Hutchins said.

“I was seeing a huge change in our local economy just through delivering the mail,” he added.

The Damariscotta Post Office was occasionally short-staffed, and Hutchins had to deal with unexpected surges of mail orders and customer-facing needs.

He said he appreciated the support of the 40-plus people who showed up outside the post office in June 2020 for a demonstration in support of the Postal Service.

Hutchins’ days as a postmaster started with opening up the post office at 6:30 a.m.

If he was running the Damariscotta route that morning, he would start delivering at 7 a.m., with 666 customers and 35 miles of ground to cover.

“It’s demanding and time-consuming work,” Hutchins said. “You have to be someone who’s detail-oriented, dependable, diligent, and who can follow the rules.”

Hutchins said his motivation to work for the U.S. Postal Service centered around a commitment to national and civic service.

After earning his bachelor’s degree in political science from the University of Maine and joining ROTC, Hutchins served as a lieutenant in the U.S. Air Force, working as a munitions and missile maintenance officer.

“It was an exciting time to be a munitions officer, with the Soviet Union undergoing major changes,” he said. “The whole world was changing and we were a part of it.”

When the Soviet Union collapsed in 1991, Hutchins was 31, single, and eager to return home to his family in Alna.

The next year, overwhelmed by the scope of Hurricane Andrew’s destruction in Florida and Louisiana, Hutchins joined the American Red Cross and served as a family services technician in South Florida.

“You could have a thousand dollars in your pocket and still not be able to buy a glass of water,” he said.

“It’s a massive responsibility when you readily sign up to serve anywhere on American soil,” Hutchins said. As a family services technician, he assisted people affected by the hurricane with their needs for food, medicine, and shelter.

When he returned to Maine, Hutchins’ mother, a retired postmaster, suggested that he join the Postal Service.

“Over the years, I’ve learned the ins and outs of town just through talking to people and delivering mail,” Hutchins said. “It’s a job that connects you to community.”

Hutchins plans to spend more time with his wife, Darcy; his son, Andrew; and his stepdaughters, Rachel and Yvette, during his retirement.

“I’m too young to stop working,” he said. “I’d love to get involved in more volunteer work within the county.”

While much has changed in his time as postmaster, Hutchins said he was fortunate to have worked in the post office for so many years.

“The post office is a place where all different people can find common ground,” he said. “It’s a symbol of community.”