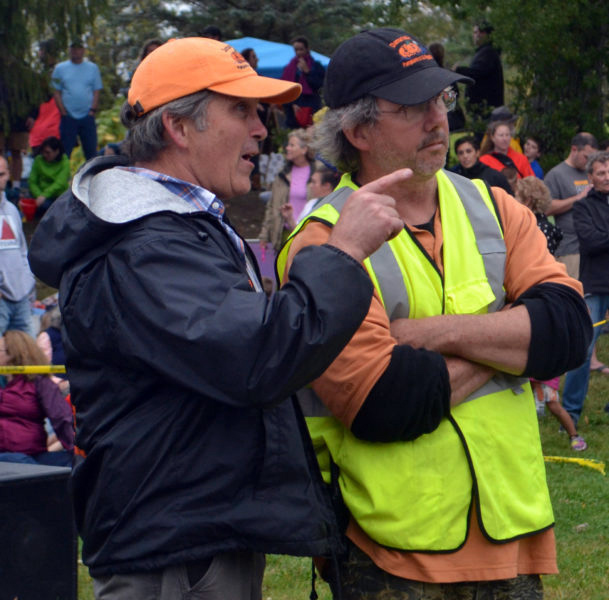 Damariscotta Pumpkinfest co-founders Buzz Pinkham (left) and Bill Clark confer before the pumpkin drop at Round Top Farm in Damariscotta in 2017. Longtime volunteers Clark and Kathy Anderson are stepping down from their positions on the Pumpkinfest committee after the festival’s 13th year. (Maia Zewert photo, LCN file)

The committee behind the Damariscotta Pumpkinfest & Regatta is losing a couple of key organizers and “begging” for new volunteers to help run the wildly popular festival.

The 2019 Damariscotta Pumpkinfest Committee held an “open town meeting” about the future of the festival in Porter Hall at Skidompha Library on Thursday, Oct. 24.

The committee members “have realized that we cannot continue to operate as we have in the past,” they said in a letter to the editor Oct. 24.

“There were a number of very vocal individuals and businesses who were critical of the Damariscotta Pumpkinfest Committee’s decisions,” the committee said in the letter. “The committee is hosting an open discussion about whether Pumpkinfest will survive and prosper and, if it does, what changes must be made.”

Most public comments at Thursday’s meeting were positive, expressing support for the festival and a desire to see it continue.

Kate Kastelein and a few other residents expressed concern about illegal parking and congested streets. Kastelein first signaled her unwavering support for Pumpkinfest and her desire for it to stay in town.

She then suggested including “no parking” markers on the Pumpkinfest event map. She referenced a Pumpkinfest visitor who argued that, since there wasn’t a “no parking” sign on the event map, he could park his car in her yard.

Lorraine Faherty, of Damariscotta, spoke to the dedication of the committee and its ability to adapt.

“I want to commend the committee because I know they make changes every single year. The barricades are the most obvious examples this year,” Faherty said.

Pumpkinfest lined Main Street in downtown Damariscotta with metal barricades to keep crowds on the sidewalks and out of traffic.

Hannah Moore, branch manager at the Damariscotta Bank & Trust location in downtown Damariscotta, said she would have liked to have known about the barricades ahead of time to make plans for the bank driveway being blocked off.

However, she said she was pleased with the response of the Damariscotta Police Department, which removed the barricades from in front of the bank’s driveway within an hour of being notified.

The committee expressed the need for new, dedicated volunteers to keep the festival alive in the coming years.

Kathy Anderson, administrative volunteer for Pumpkinfest, will step down after this year.

The committee members all lamented the loss of their longtime Pumpkinfest “mother.”

Bill Clark, co-founder of Pumpkinfest and organizer of the pumpkin weigh-offs, pumpkin deployment, and regatta, among other duties, said he will also step down this year.

“There are some key positions that are going away, not completely. There is plenty of training available to step up and do these jobs. But if people don’t step up, it may not happen,” Clark said. “We’ve got to find the people that will fill these spots and sit up here and put this on for this community.”

Clark said being a Pumpkinfest volunteer, especially a committee chair, is a full-time job and should not be taken lightly.

“It’s a lot of work, but from the comments you hear, it gives a lot back to the community, I hope. So, we need help,” Clark said.

Todd Maurer, owner of King Eider’s Pub in downtown Damariscotta and a Pumpkinfest sponsor and volunteer, said it takes over $30,000 in prize money to attract all the giant pumpkin growers to Damariscotta for the weigh-off.

“It takes money, it takes volunteers. … And the third thing you need is prayers, because you need to have good weather if you’re going to drag them in here,” Todd Maurer said.

Sarah Maurer, wife of Todd Maurer and finance chair for the committee, listed all the positions that need to be filled for next year.

“Some of us have been doing this for a long time. It’s a big job and it’s a lot of moving pieces and some of us just don’t want to continue to have the level of involvement we have. … We need volunteers, we need people that like Pumpkinfest, love Pumpkinfest, to step up and start to take some of the load,” Sarah Maurer said.

The positions open on the committee are: chair of the pumpkin drop, regatta, and weigh-offs, as well as the pumpkin sorting after weigh-offs and before deployment; volunteer for administrative duties, including agendas, minutes, and record-keeping; volunteer for fundraising; and backup chair for food, kids activities, public relations, and shuttle, parking, and safety.

Claire Sommer, volunteer public relations chair for Damariscotta Pumpkinfest, said the committee is not only looking for new volunteers, but for new ideas as well.

She said it will be important for anyone interested in Pumpkinfest to attend the first meeting about next year’s event on Thursday, March 19.

Pumpkinfest asks anyone who wants to volunteer or has new ideas for the festival to email Sommer at claire@damariscottapumpkinfest.com.