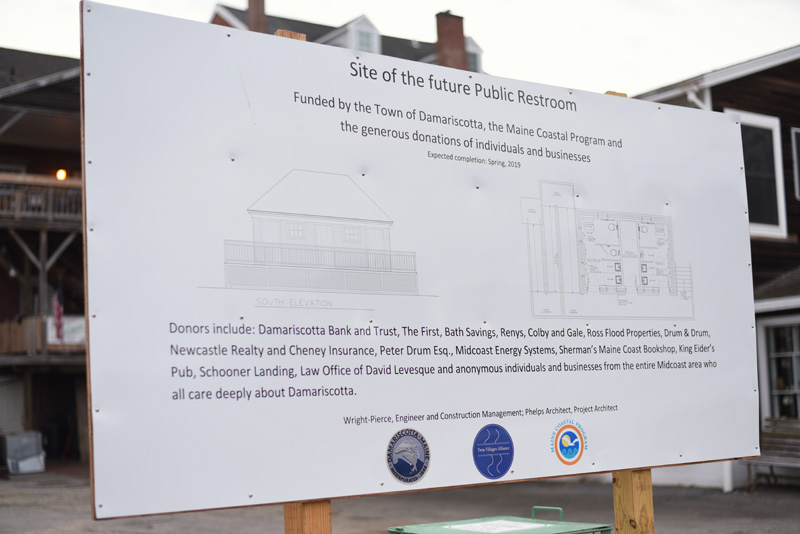 Damariscotta has received an anonymous $1 million pledge for improvements to the waterfront, including the new public restrooms, according to Town Manager Matt Lutkus.

The town will use $50,000 toward the construction of the restrooms, according to Lutkus. The other $950,000 will go toward other improvements to the waterfront.

“The donations for the larger waterfront project are coming from individuals who care deeply about Damariscotta and the future of our harbor area,” Lutkus said. “From my nearly seven years here, I can tell you that there are many people who live in the region or visit here regularly who have a great affinity for our community, but at the same time want to avoid the limelight.”

The waterfront project will include reconstruction of the parking lot, replacement of a deteriorated and poorly functioning drainage system, improved pedestrian access, and improvements to the sewer system, according to Lutkus.

The estimated cost of waterfront improvements for the town and the Great Salt Bay Sanitary District is around $1.8 million, according to the engineering firm Wright-Pierce.

“The benefits will be economic and environmental,” Lutkus said. “Maintaining and enhancing the public infrastructure is critical to the long-term sustainability of our historic downtown. Once accomplished, the improvements will provide a much better experience for those who come to enjoy our harbor views and patronize our businesses.”

Lutkus said he is seeking other sources of funding for the project. These sources include the Community Development Block Grant Program, the Maine Coastal Program, the Small Harbor Improvement Program, tax increment financing, and the Clean Water State Revolving Fund.

He has also been speaking with U.S. Sens. Susan Collins and Angus King, whose staffs have suggested that the town contact the U.S. Department of Agriculture to discuss its rural community loans program.

The Damariscotta Board of Selectmen will hold a special meeting with the Great Salt Bay Sanitary District Board of Trustees at the district’s office, 121 Piper Mill Road, Damariscotta, at 5 p.m. Oct. 10 to discuss how they can partner on the project.

“A significant part of this could be having the sanitary district replace its main sewer line adjacent to the harbor with a line that is much closer to the various businesses that back up to the parking lot,” Lutkus said. “We also look forward to the district’s help in trying to secure outside funding sources, such as those through the Clean Water State Revolving Fund.”

Lutkus said he and the selectmen will discuss scheduling a community conversation on the town’s plans for the waterfront within the next month or so.

“There is strong support, not just in Damariscotta but in the entire region, for improvements to our downtown,” Lutkus said.

Bids for the restrooms project are due Oct. 24.

There is $71,000 in the town’s capital budget for the project. The town had received a $17,300 grant from the state’s Shore and Harbor Planning Grant Program for the design of the restrooms. The donations and grants together total $473,500.

To date, the town has purchased the land for $90,000 and paid $70,000 for architectural services, engineering, project management, and administration.

“Other expenses have been for soil sampling, legal work, surveying, demolition, and a variety of other miscellaneous costs, leaving roughly $300,000 available for construction,” Lutkus said.