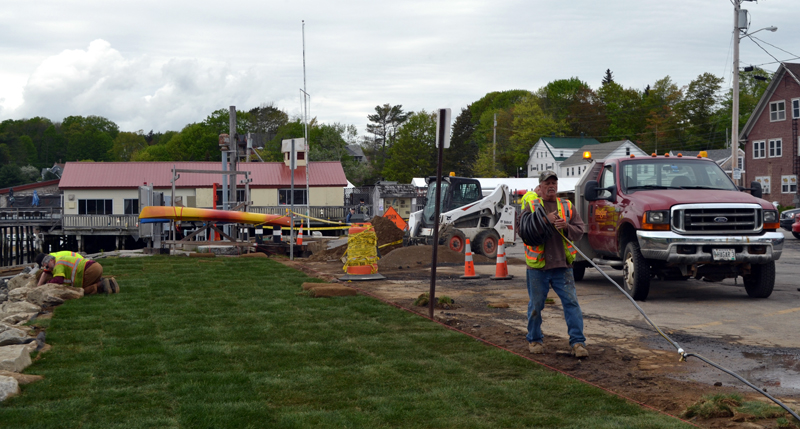 A Hagar Enterprises Inc. crew installs sod and runs a hose line at Riverside Park in Damariscotta the morning of Monday, May 22. (Maia Zewert photo)

The town of Damariscotta has received another donation for its waterfront improvement project from an anonymous donor.

The Damariscotta Board of Selectmen voted unanimously to accept the $40,000 donation during its meeting the evening of Wednesday, May 17. The gift follows $75,000 in donations from three anonymous private donors in April.

The Twin Villages Alliance is acting as the fiscal agent for the tax-deductible donations.

“I know we have thanked them before, but I want to continue to thank them for stepping up to help us manage the donations,” Chair Robin Mayer said during the meeting.

Of the $115,000 the town has received, $35,000 was designated for improvements to Riverside Park, between the municipal parking lot and the Damariscotta River.

Hagar Enterprises Inc., of Damariscotta, completed repair to the riprap earlier in May. Crews were at the park Monday, May 22 to lay down sod, turf, and pavestones.

The turf will be continually watered until around July 1 to allow it to establish itself, according to Damariscotta Road Commissioner Hugh Priebe. During that time, people can walk on the turf, but Priebe said dog waste could have a negative impact.

The rest of the funds will go toward a pedestrian walkway from the downtown to the parking lot and the construction of public restrooms in the small parking area adjacent to Taco Alley in the municipal parking lot.

The town currently has $11,000 in reserve accounts and $60,000 from a bond voters approved in November for the construction of the restrooms. With the donations, the town has approximately $151,000 for the restrooms and the walkway.

The estimated cost of two restrooms with two stalls each is $150,000-$200,000. During previous selectmen’s meetings, Town Manager Matt Lutkus said the town will get an updated estimate for the restrooms.

The improvements to Riverside Park and pedestrian access and the construction of public restrooms make up phase one of the town’s waterfront improvements. Phase two involves upgrading the sanitary system and upgrading the pump station facilities near the boat ramp for an estimated total of $350,000.

The final three phases of the waterfront improvement project call for the reconstruction of the municipal parking lot and storm drain improvements for an estimated cost of $320,000 per year for three years.