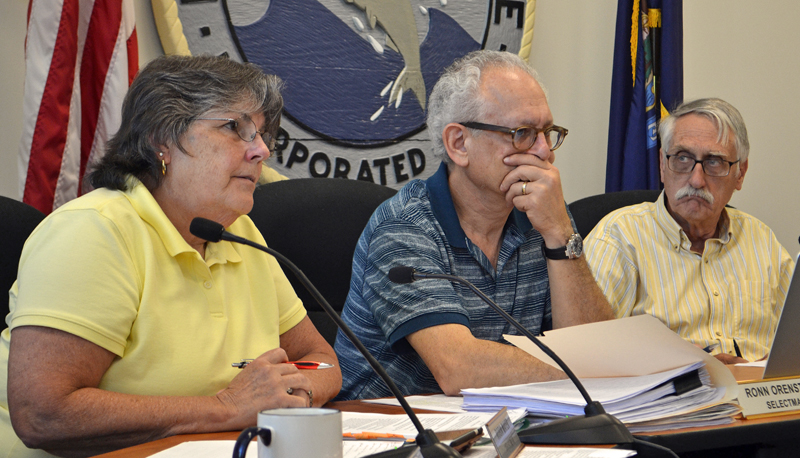 From left: Damariscotta Board of Selectmen Chair Robin Mayer speaks during a public hearing about recreational marijuana at the town office Wednesday, July 19 as Selectmen Ronn Orenstein and George Parker look on. (Maia Zewert photo)

A public hearing Wednesday, July 19 was Damariscotta’s “first bite of the apple” in determining how, if at all, the town will regulate retail marijuana shops, social clubs, commercial cultivation, and other operations, according to Damariscotta Board of Selectmen Chair Robin Mayer.

A handful of residents and business owners expressed their opinions during the public hearing, and the town plans to gather more feedback through an online survey and future community conversations.

The selectmen held the public hearing as a way to gather information about how residents and business owners feel the town should regulate retail marijuana  and social clubs.

While Damariscotta voted in favor of the legalization of recreational marijuana 736-611 in the statewide referendum in November, the results do not indicate how or whether residents wish to regulate related businesses, Mayer said.

The majority of speakers at Wednesday’s hearing were in favor of regulating some aspects of the industry, while others wish to see a ban on all recreational marijuana-related businesses.

In previous meetings, both Town Manager Matt Lutkus and the selectmen compared the topic of recreational marijuana-related businesses to the town’s enactment of an adult entertainment ordinance in 2015. The ordinance placed permanent restrictions on where adult entertainment establishments could operate, requiring a 1,500-foot buffer between such establishments and any school, day care center, recreational facility, church, or park.

During the July 19 hearing, Shari Sage expressed concern about secondhand smoke, but asked that the town not approach recreational marijuana-related businesses the same way it did adult entertainment.

“That, to me, demonizes recreational marijuana, and I don’t think it needs to be a knee-jerk reaction,” Sage said.

While medical marijuana has been legal in Maine since 1999, patients must meet specific criteria to receive a prescription, Sage said. For people who do not meet the requirements to use medical marijuana, the use of recreational marijuana could help, she said.

Jim Campbell said he does not see any problems with allowing any sort of recreational marijuana establishment in the town.

“If something goes haywire, that’s what the police department will be called for to look into,” Campbell said. “Other than that … if you don’t like it, don’t buy it.” 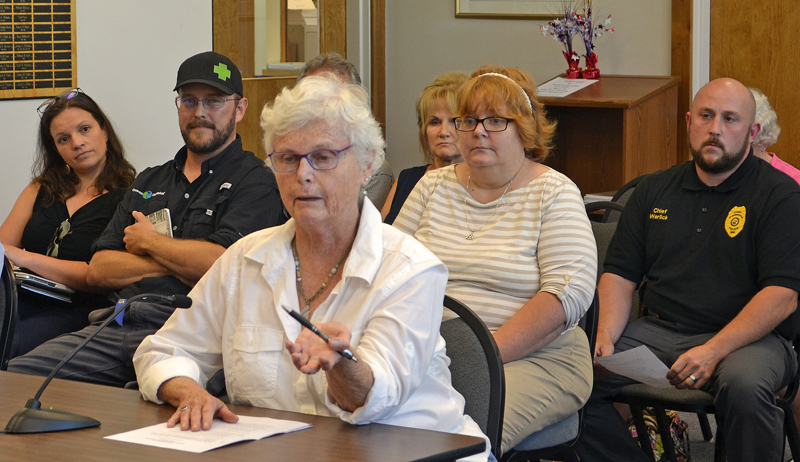 Mayer asked Campbell his opinion about whether establishments should be able to locate near schools or churches. Campbell said he didn’t really see a problem with it.

Natalie House, of Cedar Lane, said the town “definitely needs to limit” the amount of marijuana that can be grown or sold at an establishment.

“This isn’t going on too long and already the kids are getting into it. This is what we can look forward to,” House said.

While its prohibition is fairly recent, “cannabis has been around for all of human history,” said Kathy Smith, of Lessner Road. Smith said she prefers the phrase “adult-use cannabis” to recreational marijuana and asked if the town would consider using the same terminology.

Some residents said the legalization of recreational marijuana could be a source of job growth for the town.

Conor Smith, of Lessner Road, spoke about his experience working with cannabis retailers and growers across the country, and said shop owners tend to be “very sensitive to the public” and to the communities around them.

Way spoke in favor of allowing each of the possible establishments in Damariscotta, including growing and testing facilities, and said it would bring a “higher level of job opportunities” to the local area, including laboratory work and machine calibration.

Education would be an important component of any path the town decides to take in regard to retail marijuana shops, social clubs, and other establishments, Smith said. Both he and Way said they would be willing to speak more about their experiences working in the industry to answer any additional questions from the town.

Emily Bauer, of Healthy Lincoln County, volunteered to provide information about the organization’s efforts to prevent youth from accessing marijuana.

Ed Stelzer, of Westview Road, spoke in favor of total prohibition of marijuana except for medical uses. Stelzer said that while Maine has legalized recreational marijuana, it is still illegal at the federal level.

“I am of the older set, very conservative, and I have been an adamant opponent to any use of marijuana unless there is a … medical reason,” Stelzer said.

Lorraine Faherty, of Elm Street, said she has “very mixed feelings” about recreational marijuana. As a retired attorney, she said she has professional experience witnessing the misuse of drugs of all kinds and expressed concern about people who might drive while impaired after leaving a social club.

Damariscotta Police Chief Jason Warlick said he has concerns about social clubs and driver impairment. He said police chiefs across the state have taken the same stance and decided to wait until the state finalizes its regulatory requirements before determining how law enforcement will need to respond.

After the public hearing closed, Selectman Mark Hagar said he would like to get more residents involved in the conversation and make sure the town takes the time to consider all possible factors as it makes decisions about regulations, including the fact that Damariscotta is a service center.

Under the legislation passed in November, the state licensing authority will provide 50 percent of the licensing fee to the municipality in which a marijuana retail establishment or social club is located.

In addition, a municipality may impose a licensing requirement separate from the state licensing authority, something Way said he is “definitely in support of.”

“I think it’s beneficial to the town and well within the norms of the industry,” Way said.

In the near future, Lutkus will post a survey on the town’s website to gather further input from residents on the topic. In addition, the selectmen plan to hold a community conversation to draw more people into the discussion.