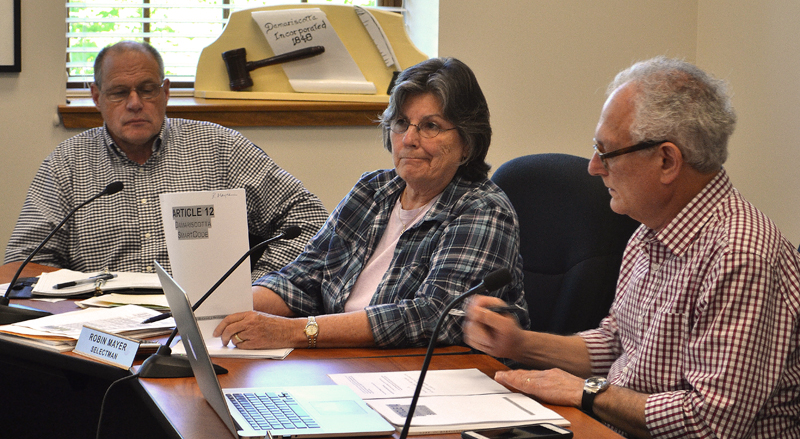 Damariscotta Board of Selectmen Chair Robin Mayer holds up a copy of the Damariscotta SmartCode, a form-based code voters rejected in June 2011, while Town Manager Matt Lutkus (left) and Selectman Ronn Orenstein look on during a workshop Wednesday, June 7. (Maia Zewert photo)

Amid renewed interest in commercial development in Damariscotta, the town will form a committee to draft an amendment to the land use ordinance integrating the concept of form-based codes.

The recommendation came out of a joint meeting of the Damariscotta Board of Selectmen and Damariscotta Planning Board on Wednesday, June 7.

For the past two years, the town’s ordinance format committee has been in the process of updating Damariscotta ordinances to create uniformity, but the committee has delayed the review of the land use and site plan review ordinances, Damariscotta Board of Selectmen Chair Robin Mayer said. The purpose of the workshop was to discuss how the town should approach a review of its land use ordinance, partially with consideration to new commercial development.

In May, the Damariscotta Planning Board approved an application for a Dollar General store and Sherwin-Williams store at the intersection of Main Street and Biscay Road. The approval came a month after another developer appeared before the board to present a proposal for an 11-acre property at 435 Main St.

The town has not received a formal application for the property at 435 Main St., which would include a 22,000-square-foot building for two retail stores, a 5,625-square-foot retail/restaurant building, and a 3,400-square-foot bank with a drive-thru.

The projects have sparked interest in the community, both from residents of Damariscotta and those living outside town lines. On May 3, the grass-roots group Our Town Damariscotta held a community conversation about the options area residents have for voicing their concerns about commercial projects. Many members of Our Town were in attendance at the June 7 workshop.

The “big question” the town should ask before proceeding with a full review of the existing ordinances is whether another look at a form-based code would be beneficial, Selectman Jim Cosgrove said during the workshop. Form-based codes call for multiple-story, mixed-use buildings typical of historic main streets in New England.

The Damariscotta Board of Selectmen and Damariscotta Planning Board, along with Town Manager Matt Lutkus and Town Planner Tony Dater, meet for a workshop to discuss a review of the town’s land use ordinance. (Maia Zewert photo)

“I think we have to ask if it is easier and more efficient to go back down that path, or do we move forward?” Cosgrove said.

Jenny Mayher, of Newcastle, one of the organizers of Our Town, suggested that the town propose a form-based code based on the findings of the Damariscotta Heart and Soul Design Charrette. In the months leading up to the vote, the town could have an “education process” about what the code says and the process of developing it, Mayher said.

Cosgrove said a vote either in favor or against the form-based code wouldn’t accurately demonstrate what residents feel.

“I think this requires more than just an up-or-down vote. I think it requires a community conversation,” Cosgrove said.

The boards discussed different ways to gather input from residents, including an online survey and community meetings. Planning board member Shari Sage suggested that any conversation include viewpoints from neighboring towns. 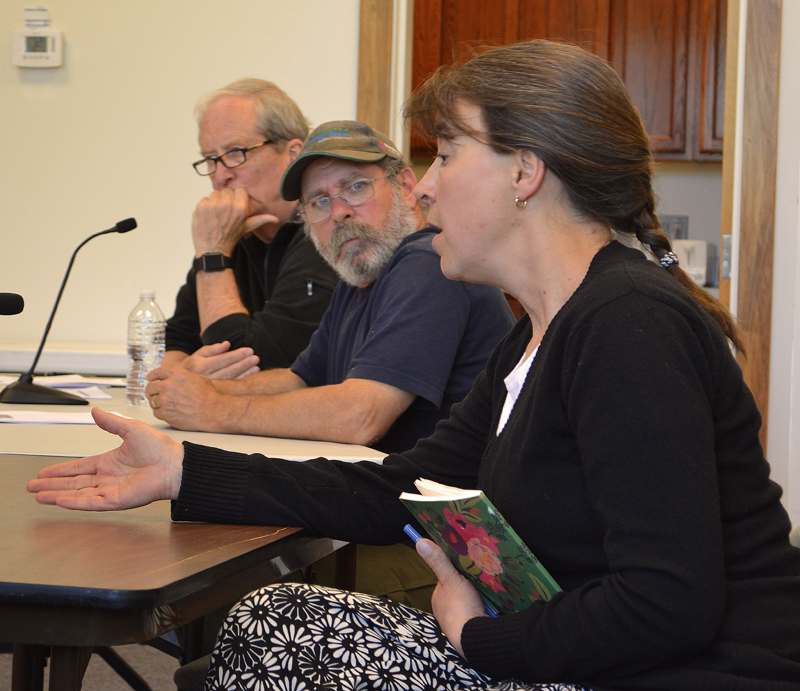 Our Town Damariscotta organizer Jenny Mayher speaks while Damariscotta Planning Board members Bruce Garren (left) and Jonathan Eaton look on during a workshop with the Damariscotta Board of Selectmen on Wednesday, June 7. (Maia Zewert photo)

After almost 45 minutes of discussion, the boards came to a consensus that a new committee, consisting of members of the town’s land use committee, the planning board, and interested residents, would review the existing land use ordinance and the final report from the Heart and Soul Design Charrette.

The committee would report back with a draft amendment to the land use code in “two or three months,” which would then go through a public review process, including community conversations, Town Manager Matt Lutkus said.

“I’m good with that for a start,” planning board Chair Jonathon Eaton said. “We have to start somewhere.”

“Maybe we need a moratorium, if we’re letting developers decide how the town is going to look,” Mayher said. “As citizens, we have a right to do that. I don’t want to play that way, but I do think there is a reason to get in front of it.”

The selectmen planned to take official action on the creation of the committee during their meeting Wednesday, June 14. The meeting was scheduled to take place in the Great Salt Bay Community School cafeteria before the annual town meeting.

Anyone interested in being on the committee is encouraged to read both the land use ordinance and the charrette report, which are available on the town’s website, and to contact Lutkus at 563-5168.