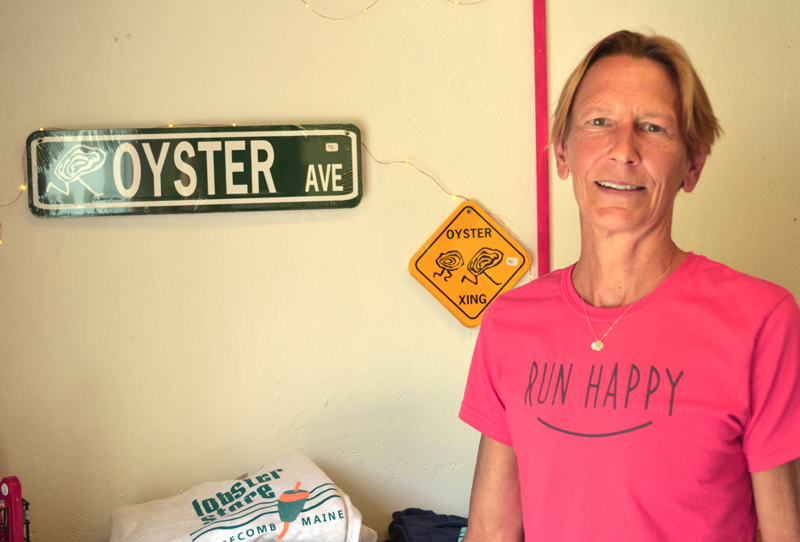 Barb Scully stands with some of the unique products available at Scully’s Oyster and Lobster Market on River Road in Edgecomb on Thursday, Aug. 17. (Abigail Adams photo)

There was no equipment or retail market to support Maine’s oyster aquaculture when Barb Scully, of Edgecomb, entered the industry 31 years ago. Maine oysters are now distributed across the country, with widespread recognition of the Damariscotta River as producing some of the finest-quality oysters on the market.

Scully was at the forefront of the emergence of Maine’s oyster aquaculture. Glidden Point Oyster Sea Farm, the company she founded, grew from a backyard experiment to a “wildly successful” business growing more than 10 million oysters at its height with distribution across the United States, Scully said.

Scully sold Glidden Point Oyster Sea Farm to Ryan McPherson about a year and a half ago. While Scully has scaled back her role in oyster aquaculture, she still intends to play an integral part in it, she said. She has transformed her retail shop at 707 River Road in Edgecomb into Scully’s Oyster and Lobster Market.

She now sells strictly wild oysters that have been grown and perfected by nature in the Damariscotta River. “This has been the year of the wild oyster for me,” Scully said. “I’ve challenged myself to find enough wild oysters to support my retail market.” She has secret spots in the river where she finds the wild oysters, she said.

The retail store was always on the periphery when Scully ran Glidden Point. “Now I have the luxury to be able to get to know the people that have been coming in for decades” and thank them for their support of Maine aquaculture, she said. “There are a lot of good, hardworking people in the industry, and they do appreciate all the support.”

The Damariscotta River has a long history of wild oyster production, with shell middens created by Native Americans in the region still visible. Oysters all but disappeared from the river due to pollution during the Colonial period, according to Fish Farmer’s Magazine.

Oysters saw a resurgence in the region through the introduction of aquaculture in the 1970s and 1980s, just as Scully was looking “for something to be focused on and excited about,” she said. “It’s almost like oysters found me.”

While pursuing a degree in zoology from the University of New Hampshire, Scully spent her summers working at the Shoals Marine Laboratory, the university’s cooperative marine science research program with Cornell University.

Her experience at the laboratory, which at the time was a rustic outpost on an island with no running water, instilled in her a sense of discipline and mindfulness that she would later apply to her life and her business. 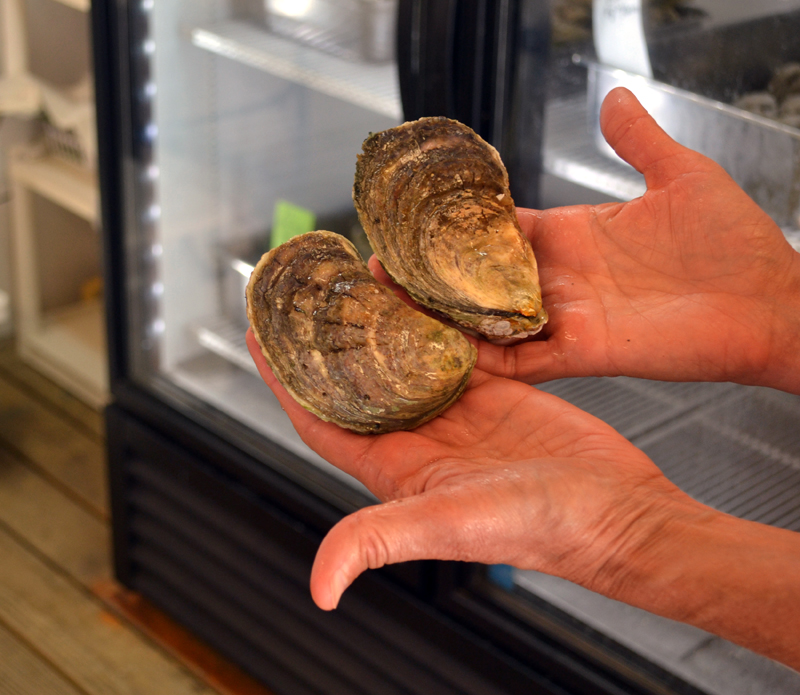 “There are only so many opportunities in life,” Scully said. “You need to be mindful and focused enough to see the opportunities when they present themselves and be prepared to take advantage of them.”

Upon graduation, Scully searched for a location where development had not “taken over the waterfront” and where commercial fisheries were not “pushed into a corner,” she said. “I wanted to be someplace where the quality of life was good, there were opportunities to do things in marine sciences, and the people cared about the same things that I did.”

Scully moved to Edgecomb. Her arrival in Lincoln County was around the same time the University of Maine’s Darling Marine Center in Walpole was experimenting with breeding an oyster that would grow in cold water.

Scully volunteered with the Darling Marine Center and began experimenting with discarded oysters. On nights and weekends, after working her full-time job as a scientist with the Maine Department of Marine Resources, she learned the ins and outs of oyster aquaculture.

In oyster aquaculture, there is a balancing act between growing oysters as cost-effectively as possible and ensuring a high-quality product. Scully was focused on producing the highest-quality oyster possible.

She grew oysters in hand-built cages for a year, because there was no equipment specifically designed for oyster aquaculture at the time, before planting them on the river bottom, where they would grow for two more years before harvesting.

“If the oyster wasn’t ready, I’d throw it back, because that’s how I wanted to do it,” Scully said. “I just wanted to do the best job I could. I wanted to produce the best quality oyster I could.”

There was little demand for Maine oysters when Scully began her operation, and it was 12 years before she began to see a profit. In the early years, she would fill the back of her pickup truck with oysters and travel throughout Maine to sell them.

Scully was competing against cheaper oysters grown in Delaware, and it was hard to convince people to pay more for her oysters. The Harbor Fish Market in Portland was one of Scully’s first big customers. Scully asked the market to offer about 300 oysters for sale with no upfront payment. She did ask the market to sell her oysters side by side with oysters from other areas to see if people would pay more for quality. They did, and the demand for her oysters grew, she said.

Scully never took out a loan for her business. The money she invested came from the oysters she harvested. When the business started to turn a profit, she “took the leap,” quit her full-time job with the DMR, and devoted her full time and attention to aquaculture.

The business grew exponentially. Distribution “started rolling” and her oysters sold across the U.S.

Scully only hired teenagers. Other farmers referred to her operation as “oyster camp.” But the self-confidence, self-reliance, and problem-solving skills the teenagers developed were more important to her than the oysters she harvested, she said. 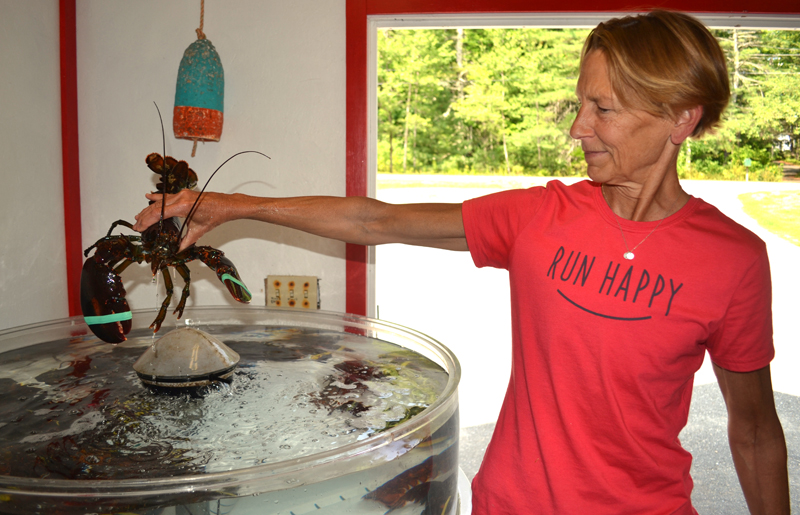 Barb Scully lifts a lobster out of a seawater tank at Scully’s Oyster and Lobster Market in Edgecomb on Thursday, Aug. 17. (Abigail Adams photo)

“I got to teach good kids important things,” Scully said. “I like to think I raised a lot of teenagers, not just oysters. The kids mattered so much more.”

With all her success, there were also pitfalls. In 2009, the oyster disease MSX wiped out 90 percent of her crop. She was also diagnosed with breast cancer. Scully, however, bounced back.

Her business was successful to the point of being overwhelming, she said. With her children grown and Glidden Point Oyster Sea Farm too big to handle with just her and area teenagers, Scully made the decision to sell when McPherson approached her with an offer.

“He wanted to continue the legacy with new energy and enthusiasm,” Scully said. “It seemed like the right thing.”

When Scully entered the industry, the people in the area who were working in oyster aquaculture could fit around her dining room table, she said. There was talk in the early days of the oyster farmers forming a cooperative and working together under one umbrella. It never happened, however, because each farmer had his or her own vision.

“It’s really cool looking back. Not one of us failed. All of our visions worked,” Scully said. Oyster aquaculture in Maine is now thriving, with Maine oysters in high demand throughout the country.

Scully is now devoted to harvesting wild oysters, which are available at Scully’s Oyster and Lobster Market. The market also sells lobsters, littleneck clams, and steamers that are naturally cleaned by submersion in the river, as well as unique keepsakes.

“I accomplished more than I ever imagined was possible,” Scully said of her career, although it is still far from over. “After 31 years, (oyster aquaculture) is not what you do, it’s who you are.”