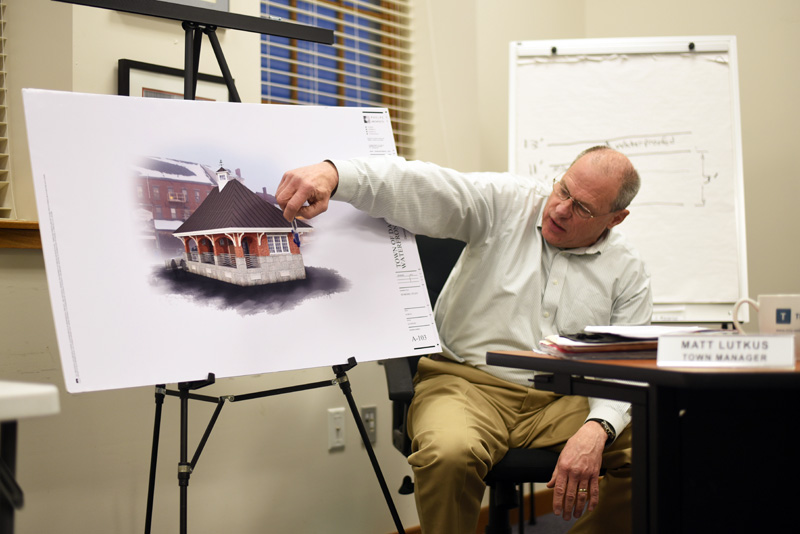 Damariscotta Town Manager Matt Lutkus goes over the plan for the downtown restrooms at the Damariscotta Board of Selectmen’s meeting Wednesday, March 7. (Jessica Picard photo)

Damariscotta residents will decide whether to purchase the barbershop building in the municipal parking lot for the construction of public restrooms during a special town meeting Wednesday, March 21.

The date of the meeting was approved during the Damariscotta Board of Selectmen’s meeting Wednesday, March 7, during which the selectmen heard the most recent plans for the restrooms from Town Manager Matt Lutkus.

This past week, town officials were able to reach an agreement for the purchase of the barbershop building and adjacent property with the property’s owners, Dan and Eileen Miller, Lutkus said in an email to the selectmen March 5.

With the change to the barbershop site rather than the parking area by Taco Alley, the building will be a scaled-back version of renderings previously prepared by Phelps Architects Inc., of Damariscotta.

The restroom building will no longer have an office for the harbor master, and will have a lower roofline, Lutkus said in his email.

If the purchase is approved, the barbershop will be leveled, the adjacent parking lot will be paved, and drainage will be improved, Lutkus said.

The purchase price for the approximately 1,700-square-foot area will be $90,000. There will be some additional cost for improvements to the owner’s adjacent parking lot. The town had already committed to the improvements through deed agreements the town entered into with the previous owners of the property, Lutkus said in his email.

The town’s responsibility of $71,000 was previously approved by voters, and the balance will be funded by a grant and private donations, Lutkus said at a Damariscotta Planning Board meeting March 5.

“I’ve had several questions in the last few days about why we are putting a restroom in the middle of the flooding parking lot,” Lutkus said at the selectmen’s meeting.

Even though the municipal parking lot has flooded twice in the past two months, Lutkus said the new construction will not be affected by it.

The restrooms will be built 3 feet above the existing 8-foot elevation of the parking lot, and will be waterproofed 2 more feet.

“It’s going to be well above the flooding we have seen to date,” Lutkus said at the planning board meeting.

“We will probably be the first structure to be built in that area that complies with the federal flood zone requirements … so we’ll be setting an example for future building,” Lutkus said at the selectmen’s meeting.

“I appreciate all the work that you’ve done on this,” Chair Robin Mayer said to Lutkus during the meeting.

“There’s a number of people working behind the scenes on this,” Lutkus said.

The sketch plan review of the restrooms will take place at the planning board’s next meeting, scheduled for 6 p.m. April 2.

Prior to their regular meeting, the selectmen began their review of portions of the municipal budget.

The largest increase to the proposed administration budget is a $3,300 addition for a contracted recording secretary for the board of selectmen and planning board, bringing the budget to $381,851.25, a 4.49 percent increase from last year.

The selectmen will review the rest of the budget, including the fire department and police department budgets, during their meeting at 4 p.m., Wednesday, March 21.

The special town meeting will take place at the town office at 5:30 p.m., Wednesday, March 21.