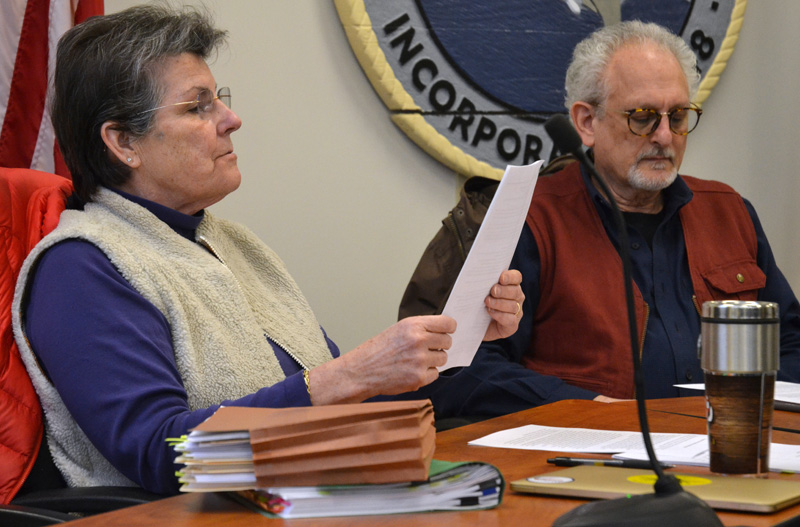 Damariscotta Board of Selectmen Chair Robin Mayer reads from her notes on marijuana ordinances as Selectman Ronn Orenstein looks on during a workshop at the town office Wednesday, March 27. (Maia Zewert photo)

Despite the chair’s call to table the issue, the Damariscotta Board of Selectman moved forward with its review of draft ordinances to govern licensing of medical and recreational marijuana businesses during a workshop Wednesday, March 27.

Town Manager Matt Lutkus could not attend the workshop, as he was testifying in support of legislation regarding a local-option sales tax on behalf of the board in Augusta.

Six community members were in the audience, however, since the purpose of the workshop was for the selectmen to review the ordinances, no public comment was allowed.

“It’s open to the public, it’s being recorded, but the public is here to listen and observe and not comment,” Damariscotta Board of Selectmen Chair Robin Mayer said.

In a March 7 email to the selectmen, Lutkus outlined the straw-vote decisions the board would make during the workshop.

The first topic for a straw vote dealt with whether the board wants to delay any decisions on the ordinances until, if ever, the federal government legalizes medical and/or recreational marijuana.

Leading off the discussion, Mayer presented her research into federal and state laws. Mayer said she does not believe the board should propose an ordinance contrary to federal law.

Mayer expressed concern that, by requiring town staff to carry out any ordinances related to marijuana, the board would be requiring the staff to aid and abet illegal activity.

In addition, Mayer spoke about the issue of pre-emption, which is the invalidation of a law that conflicts with federal law.

“When I read through all of this, I personally believe that if we do this and if we move forward, the pre-emption statute kicks in, that we are opening up ourselves and our staff to be aiding and abetting illegal, criminal activity,” Mayer said.

“I’m saying that knowing Washington has passed marijuana laws, California has passed laws,” Mayer said. “But in each instance where the courts have been asked, they say that the pre-emption is there, but there’s kind of the cavalier attitude of, ‘Well, the feds aren’t enforcing it, so go ahead with it.’”

“It’s like saying, ‘Let’s all speed on Bristol Road because the cops aren’t enforcing the speed limit law,’” Mayer said.

Lutkus has received numerous emails and communications from people in the community against allowing marijuana businesses in town, Mayer said.

“Even though the vote was for it, the people we’re hearing from are against it, except for the two people who want to sell it,” she said. “I don’t think there’s a pressing need to move forward based on the input we’ve received from the community.”

After a closed-door session between the selectmen, Meader, and town employees, Mayer made a motion to not move forward with marijuana ordinances in Damariscotta, as the ordinances would be inconsistent with federal law. Mayer and Selectman Lou Abbotoni voted in favor of the motion.

When Hagar, Leshure, and Selectman Ronn Orenstein did not raise their hands in favor, Mayer said, “OK, motion fails,” and did not call for objections or abstentions.

After the vote, the selectmen reviewed the draft medical marijuana licensing ordinance with Meader. The board, in straw polls, agreed to limit new marijuana businesses to the C2 district and limit the town to three manufacturing facilities. They agreed not to limit the number of testing facilities.

The selectmen did not work on the draft ordinance for recreational marijuana, but will likely schedule a future workshop to do so.

In order to hold public hearings and comply with public notice requirements, the draft ordinances would have needed to be finalized by April 3 in order to appear on the warrant for the annual town meeting.

The draft ordinances and public comments the town staff has received are available at damariscottame.com.