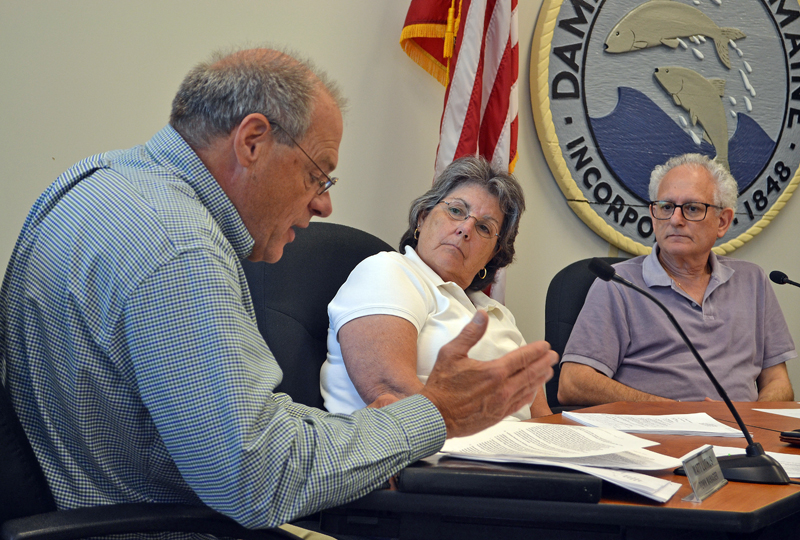 After the town received three separate inquiries on the subject in the past week, a majority of the Damariscotta Board of Selectmen spoke against pursuing a moratorium on commercial development Tuesday, Aug. 1.

In May, the Damariscotta Planning Board approved an application for a Dollar General store and Sherwin-Williams store at the intersection of Main Street and Biscay Road. The applicant recently closed on the property and site work is underway, Lutkus said.

The growing interest in commercial development prompted the selectmen to form an advisory committee tasked with developing an amendment to the land use ordinance integrating the concept of form-based codes. The selectmen have tasked the committee to produce a draft document within the next few months, which will then go to the public for discussion before a final version is created and sent to a townwide vote.

News of a Portland developer’s proposal to develop an 11-acre property along Main Street, however, has led to three separate inquiries about whether the town should enact a moratorium on any new commercial development until the committee completes its work, Lutkus said.

Damariscotta Main Street LLC will appear before the planning board during its next meeting, Monday, Aug. 7, to discuss its proposal for the property at 435 Main St., between Hannaford Supermarket and the Lincoln County Rifle Club and across the street from Dunkin’ Donuts and The Penalty Box.

A plan submitted to the town calls for the construction of three commercial buildings: a 22,000-square-foot-building for two retail stores, a 5,525-square-foot building with three retail spaces, and a 2,700-square-foot bank with a drive-thru.

Prior to the Aug. 2 meeting, Lutkus spoke with town attorney Jenny Villeneuve about whether voters could enact a moratorium on commercial development and if a moratorium would apply to projects already in the town’s review process.

Villeneuve told Lutkus the voters could enact a moratorium on commercial development, but it could not be either too broad or too specific in its scope. In addition, applications in which the planning board “has not made substantive decisions” would be subject to the moratorium, Lutkus said.

Selectman Mark Hagar spoke against the idea of moving forward with a moratorium and said that developers “shouldn’t be punished” because the town is in the process of reviewing its ordinances. 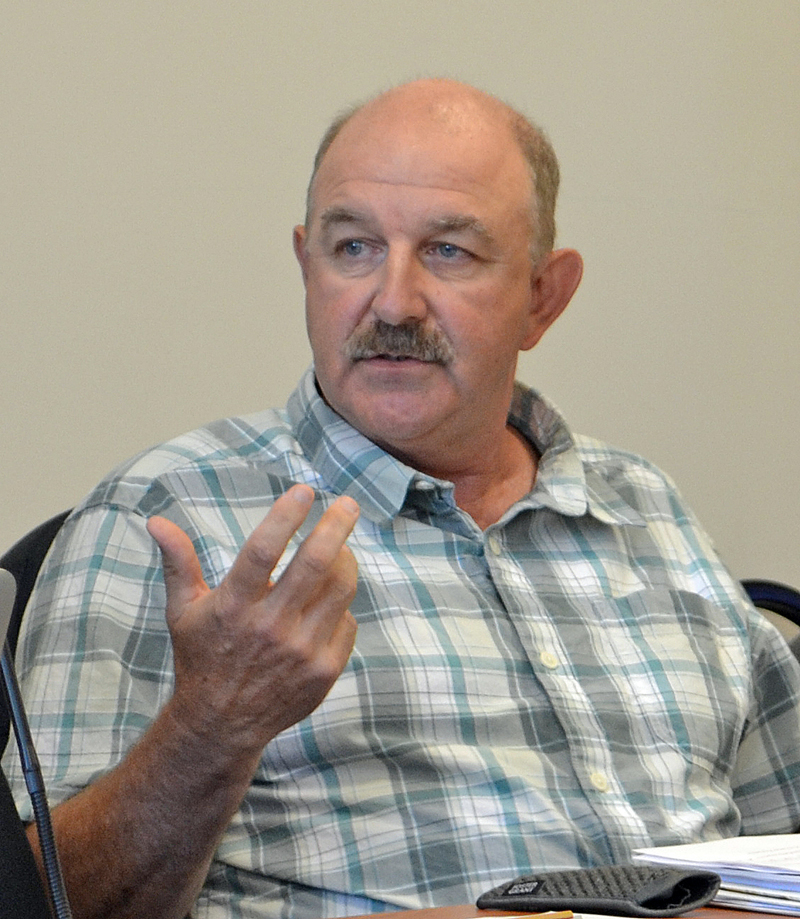 Selectman Mark Hagar speaks against a moratorium on commercial development during the Damariscotta Board of Selectmen’s meeting Tuesday, Aug. 1. (Maia Zewert photo)

“It’s not fair to developers who have been looking at this, spent a considerable amount of money, and lined up to come to this service center town, only to have them be under the gun,” Hagar said.

Selectman Ronn Orenstein agreed with Hagar and said a moratorium would “take some of the impact of the planning board away.”

“Everyone I’ve talked to and the comments I’ve seen online … all seem to have the opinion this will lessen the tax burden for those who pay taxes,” Mayer said. “We’re trying to be a business-friendly town.”

Selectman Amy Leshure was the only member of the board to speak in favor of the moratorium. A number of residents have expressed concerns to her about commercial development, she said.

“I was put on here by a number of people who said chain development was not the way to go, and I would agree to some sort of temporary hold until the committee has a chance to make its recommendations,” Leshure said.

While the discussion was not a public hearing, the selectmen allowed for input from the members of the audience. Former Selectmen Jim Cosgrove and Josh Pinkham spoke against the moratorium, reminding the board about the lengthy process the town went through to create a comprehensive plan.

“We spent almost two years on the comprehensive plan, the town did vote favorably for it, and it specifically calls for business development along Business Route 1,” Cosgrove said. “This is what the town wanted.”

“We have a site plan review (ordinance) and land use codes. If we need to tweak them and make those stronger, then that’s what we need to do. A moratorium is not the way to go,” Pinkham said.

During his time as a selectman, the board spent a lot of time discussing how to grow the town’s tax base, and economic development will do that, Pinkham said.

Damariscotta resident and Sea Smoke Shop owner Penn Way said that while a major commercial development like the one proposed would bring jobs to the area in the short term, it is important to consider the future.

“Five years down the road, do we want to see shells that can’t be redeveloped into something else?” Way said. “I want to see the town grow where the development is a shining star and not a hulk that irreparably changes Damariscotta.”

Yellowfront Grocery owner Jeffery Pierce spoke against a moratorium and called it “nonsensical.”

“We had a plan, and basically that spot along Business Route 1 (Main Street) was where we’re going to put businesses,” Pierce said.

Damariscotta Main Street LLC has the property where it intends to build under contract with the owner, Lincoln Block LLC. Jeffery Pierce and Steven Pierce signed the agreement as the sellers.

Resident Conor Smith said he is in favor of a moratorium, which would give residents time to discuss what kind of development they want to see.

“I just want to see the quaintness of the town be preserved,” Smith said.

Mayer and Cosgrove said residents already had conversations about what the town wants for development when drafting the comprehensive plan.

Shari Sage, a member of both the Damariscotta Planning Board and the new planning advisory committee, suggested that the town look to bring in more industry, rather than retail development.

“Competing businesses make a smaller piece of the pie for the businesses that are already here,” Sage said. “It doesn’t bring any new business in.”

The selectmen did not vote on whether to direct town staff to draft a moratorium. Mayer said a moratorium could still be brought before the town for a vote if a citizen’s petition is submitted to the town.