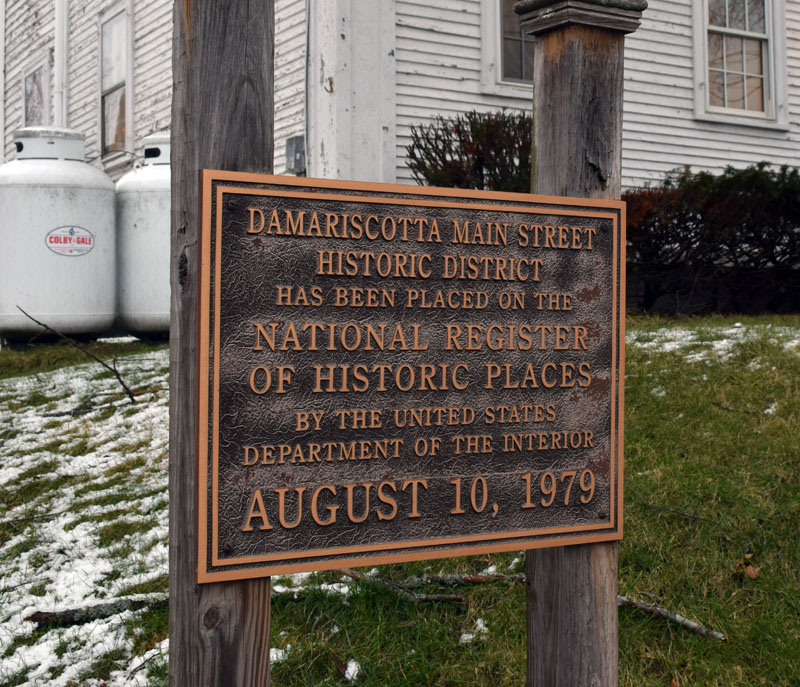 A sign marks the Main Street historic district in downtown Damariscotta, which is on the National Register of Historic Places. A new historic preservation ordinance seeks to preserve the character of the district. (Evan Houk photo)

The Damariscotta selectmen are proposing to expand the town’s historic preservation review commission from three members to five in the latest revision to the new ordinance.

The selectmen made the changes after a virtual public hearing on Wednesday, Dec. 2.

In addition to the membership changes, the selectmen accepted changes regarding the process for demolition of a historic structure and changed every “shall” back to “should” in the language of the ordinance.

After an initial public hearing on the ordinance Aug. 19, the selectmen had voted to change every “should” to “shall” in order to make enforcement of the ordinance easier.

However, after considering recommendations from attorney Amanda Meader and Town Planner Bob Faunce, the selectmen decided to change the language back to “should.”

Faunce said “shall” works for other ordinances, like land use, because the standards are not as subjective as those in the historic preservation ordinance.

For instance, the historic preservation review commission has the latitude to modify standards in the ordinance on a case-by-case basis if it determines that there are special or unique circumstances. This allows the commission to work with a property owner as much as possible to achieve the goal of the ordinance, which is to preserve the character of the Main Street historic district. The district is on the National Register of Historic Places.

The ordinance currently on the books, passed by voters March 3, uses “shall.” The town is not enforcing the ordinance yet, as the selectmen pledged to solicit feedback from the public and amend the ordinance accordingly after critical comments at a public hearing Feb. 5.

The ordinance requires property owners to obtain a certificate of appropriateness from the historic preservation review commission to alter the exterior of a building in the district. The ordinance exempts seven activities, including the installation of storm and screen windows and doors, solar panels, or window air conditioners. 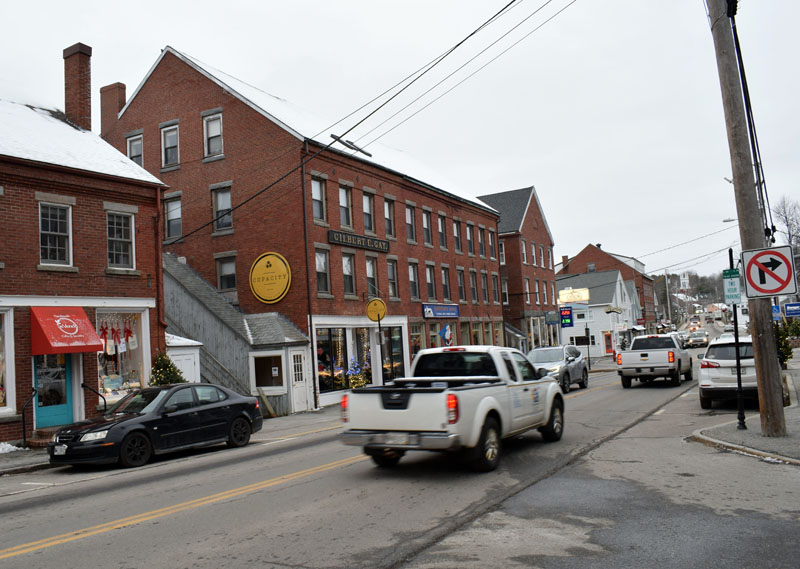 The center of the Main Street historic district in downtown Damariscotta. The selectmen are revising a historic preservation ordinance that intends to protect the character of the district. (Evan Houk photo)

Faunce and Town Manager Matt Lutkus recommended expanding the commission from three members with one alternate to five members with no alternates to allow for broader representation.

The selectmen also agreed to give preference for at least three spots on the commission to Damariscotta residents, with Damariscotta business owners being given secondary preference.

The selectmen decided to keep relaxed standards requiring a property owner to attempt to sell their property before demolishing a historic building. Faunce wrote the new standards into the current draft of the ordinance.

The current draft of Section 107.12 would require property owners to demonstrate a “good faith effort” to sell their property before the town approves the demolition or removal of a historic building, if cost-effective repairs consistent with the ordinance are not possible for the property owner.

This provision would not apply to structures that are determined, after a public hearing before the historic preservation review commission, to be “non-contributing or non-historic property.”

Faunce eliminated any reference to attempting to sell the property at “fair market price” and eased the steps a property owner has to take before demolishing a historic structure.

Under the current draft of the ordinance, a property owner would only have to demonstrate a “good faith effort” to sell the property, advertise it for sale, and provide notices required by the ordinance.

Faunce said the easing of the standards is intended to address concerns from the selectmen that a property owner could be forced to sell their property if they cannot afford to repair or replace a damaged building with historically acceptable material and aesthetics.

He advised against keeping the relaxed standards, however, saying that someone could theoretically list a property at a very high price without having the reference to “fair market price” in the ordinance.

A new section, 107.12.2, has been added to the ordinance, requiring the historic preservation review commission to approve a certificate of appropriateness for any replacement structure on a lot where a historic building has been demolished or removed.

Another public hearing and a special town meeting to approve the revised historic preservation ordinance will be scheduled when it is possible to have an in-person meeting under public health guidelines, said Robin Mayer, chair of the board of selectmen.