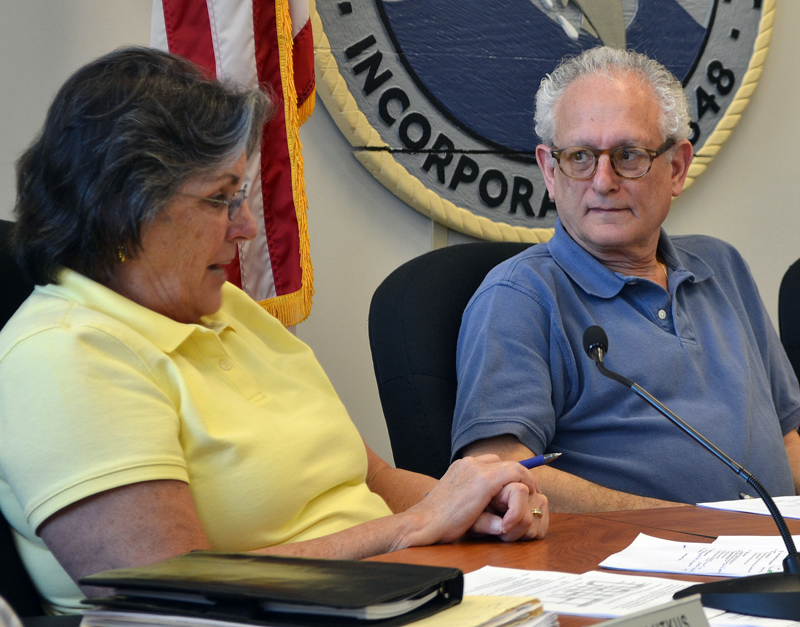 Damariscotta Board of Selectmen Chair Robin Mayer talks about the town’s ordinances during the board’s Wednesday, May 17 meeting as Selectman Ronn Orenstein looks on. (Maia Zewert photo)

In response to renewed interest in commercial development in town, the Damariscotta Board of Selectmen will hold a workshop to discuss recent developments June 7.

Damariscotta residents in attendance at the selectmen’s Wednesday, May 17 meeting expressed their opinions about how the town should move forward and the response the developments have met.

In the past four months, two separate developers have appeared before the Damariscotta Planning Board to discuss proposals for developments along Main Street. Damariscotta DG LLC has submitted an application for a Dollar General store and Sherwin-Williams store at the intersection of Main Street and Biscay Road. The planning board approved the project with six waivers on May 1 with a vote of 4-1.

In April, a Portland developer appeared before the board to present a sketch plan for an 11-acre property at 435 Main St. The plan calls for the construction of three buildings: a 5,625-square-foot retail/restaurant building, a 3,400-square-foot bank with a drive-thru, and a 22,000-square-foot building for two retail stores.

After the meeting, Damariscotta Town Manager Matt Lutkus met with Jenny Mayher, a representative of Our Town Damariscotta and resident of Newcastle, to hear about the concerns brought up during the May 3 meeting. The Damariscotta selectmen had a regularly scheduled meeting at the same time as the Our Town meeting and were unable to attend.

During the selectmen’s May 17 meeting, Lutkus suggested that the town revisit its current land use and site plan review ordinances, as well as the idea of a form-based code, something the town considered in June 2011.

“We have an interest in business development we haven’t seen in many years, and I think we’re seeing both the benefits and the limitations of our current ordinances,” Lutkus said.

Over the past two years, the town’s ordinance format committee has been in the process of updating Damariscotta ordinances to create uniformity. Damariscotta Board of Selectmen Chair Robin Mayer said the committee has been delaying a review of the land use and site plan review ordinances, which are “cumbersome and complicated,” in case the town decided to revisit the idea of a form-based code.

“It’s certainly timely to take those up again,” Selectman George Parker said. “It’s been sitting around for the last few years because there haven’t been any development projects, so it’s time to review all of those (ordinances).” 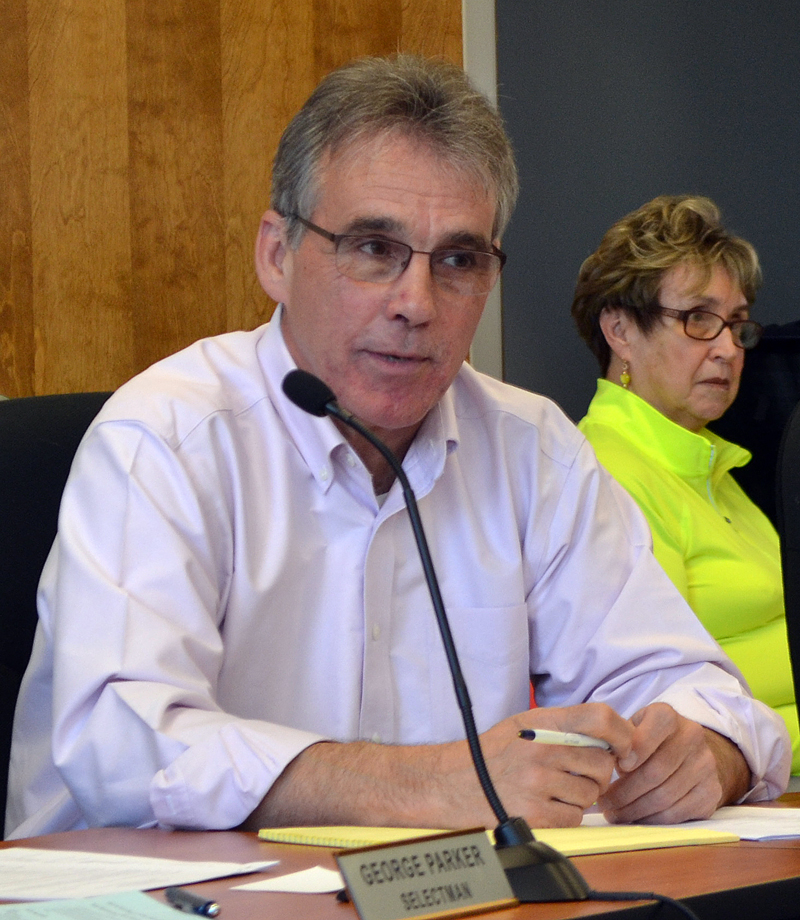 Damariscotta Selectman Jim Cosgrove talks about commercial development in town during the Damariscotta Board of Selectmen’s meeting Wednesday, May 17. (Maia Zewert photo)

The town could hold a community conversation with area residents, including those who live outside Damariscotta, as a way to learn what kind of development people hope to see in the area, Lutkus said.

Damariscotta resident Jim Campbell spoke out against allowing people who neither live nor own property in the town to participate in the process.

“They should be told to mind their own business,” Campbell said.

Damariscotta Planning Board member Shari Sage spoke in favor of letting non-residents weigh in, as they come to Damariscotta for various errands and for work.

“I think their opinion is valuable,” Sage said.

Selectman Jim Cosgrove proposed that a community conversation, rather than focus solely on commercial development and ordinances, should take a wider view about the town’s position as a service center.

“We are the place people come to shop, gather … but the fact of the matter is, it’s only the people of Damariscotta who pay for that through their property taxes,” Cosgrove said.

The selectmen decided to hold a workshop with the Damariscotta Planning Board at the conclusion of their next meeting, which will take place at the town office at 5:30 p.m. June 7, to continue the discussion at length.