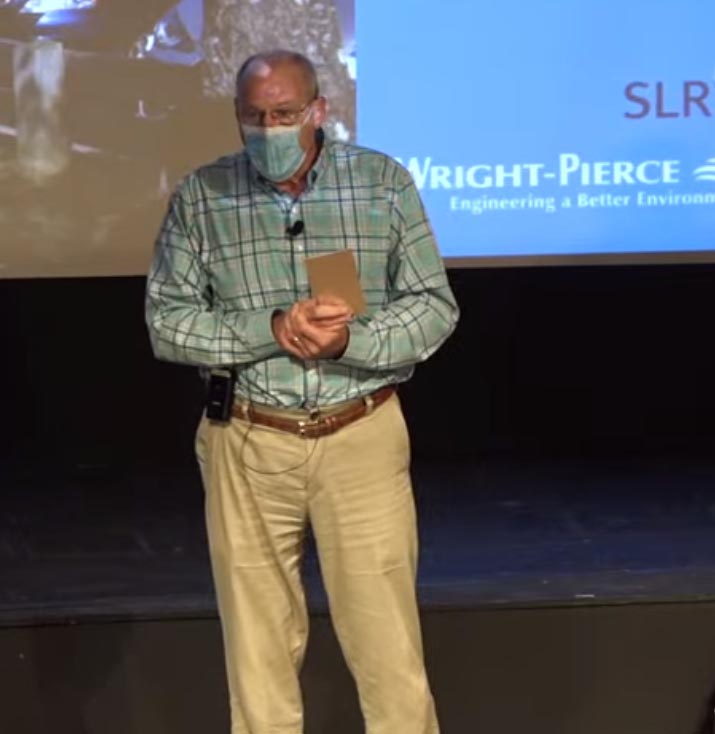 Damariscotta hopes to begin construction on the second phase of its $4 million-plus waterfront improvement project by fall 2022, and complete construction by spring 2023, said Jan Wiegman, an engineer with Wright-Pierce, during a community conversation at the Lincoln Theater on Tuesday, Sept. 28.

This phase would include storm water drainage improvements, pedestrian access, and repaving of the downtown municipal parking lot. Another phase would then finish the waterfront improvements with a flood protection system and a landscaped park on the shoreline.

Wiegman said engineers are planning to complete a 95% design of the entire system by January 2022, even though it is possible the town could run out of funds before all aspects of the project are completed.

The federal Economic Development Administration awarded the town a $3 million grant that is funding the majority of the project, in addition to an anonymous $1 million that was leveraged to access the federal grant.

The agency indicated to the town that it should proceed with the design of the entire project and complete the work in phases, with the possibility of another grant being awarded in the future for the flood protection system and public park work.

“We’re going to try and design the wall to best fit the town knowing we may be able to get more funds,” Wiegman said.

Forty-eight members of the public attended the community conversation. The Lincoln County News viewed a high-quality livestream of the meeting on Damariscotta’s YouTube page provided by Lincoln County Television.

Many of the comments were positive toward the project and there were questions about some of the specific elements of the 30% design plan discussed by Wiegman and Mike Zarba, of SLR Consulting.

Wiegman explained how portions of the waterfront improvement project have already been completed and paid for—such as public restrooms, sewer improvements, and the installation of an electric vehicle charging station, which cost approximately $1,022,000.

Zarba explained the need for a five-foot flood wall to remove the downtown and many businesses from the Federal Emergency Management Agency’s 1% annual chance special flood hazard area and reduce insurance costs.

Much of the conversation centered on how to preserve the view of the harbor and the Damariscotta River from the parking lot while still protecting the downtown. 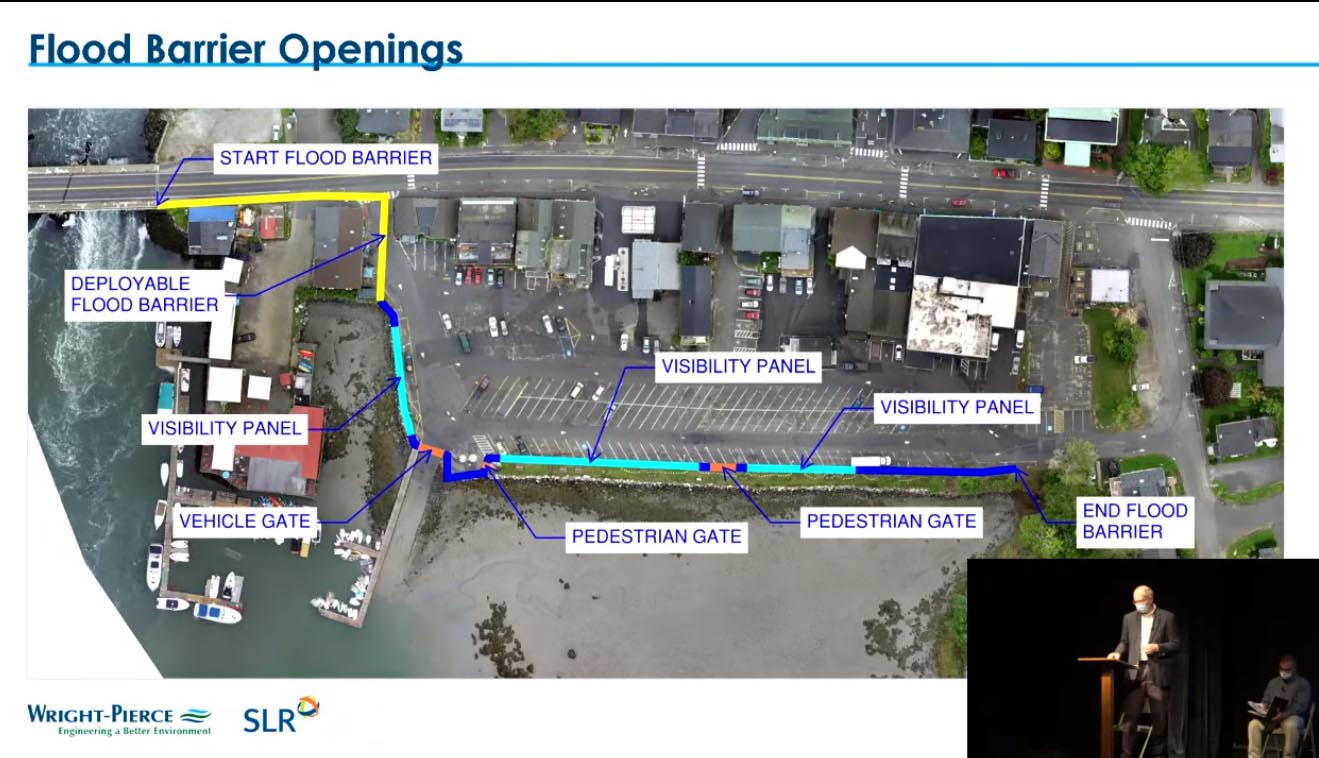 A rendering of a proposed flood wall around downtown Damariscottas municipal parking lot shows a permanent concrete barrier in dark blue, potential glass visibility panels in light blue, and a potential deployable flood barrier around the Narraganset Leathers building at 48 Main Street in yellow. Jan Wiegman, an engineer with Wright-Pierce (seen at bottom right) led a community conversation attended by 48 people on the 30% design plan for the waterfront improvement project at the Lincoln Theater on Tuesday, Sept. 28. (screenshot)

Wiegman explained how a three-foot concrete wall could be installed with two-foot-tall glass barriers on top, although that is a more expensive option. He also detailed a system that with pedestrian access points and access to the boat ramp that could be shut with a “stop-log.”

Members of the public noted that both options would incur long-term maintenance costs as someone would have to clean the glass barriers and deploy the stop-logs in preparation for a flood event or high tide.

The permanent flood wall would extend from Water Street and wrap around the parking lot to Misery Gulch, right across from Schooner Landing.

Wiegman said the option of a deployable and temporary flood barrier is being explored to extend around and in front of the Narragansett Leathers building at 49 Main St., owned by Alan McKinnon, until it reaches the Twin Villages Bridge.

Wiegman discussed the storm water management system that would be installed to reduce flooding in the parking lot. The system would include an underground storage tank for rainwater runoff to collect and include new pipes, catch basins, and stormwater treatment.

He said that Taco Alley would be paved to emphasize that area as a pedestrian access point to the riverfront and a sidewalk would be installed from Water Street into the parking lot.

Zarba discussed the living shoreline park that will be installed where Riverside Park is. He said that the horizontal space can be extended by using boulders, creating a larger park area that would also alleviate wave run-up during storm events.

Paths, benches, and landscaping would be installed along with Americans with Disabilities Act-certified walkways.

Shari Sage, a member of the Damariscotta Waterfront Improvement Committee, said the town should look at incorporating a mural or dedication to Damariscotta’s rich ship-building history on the waterfront. 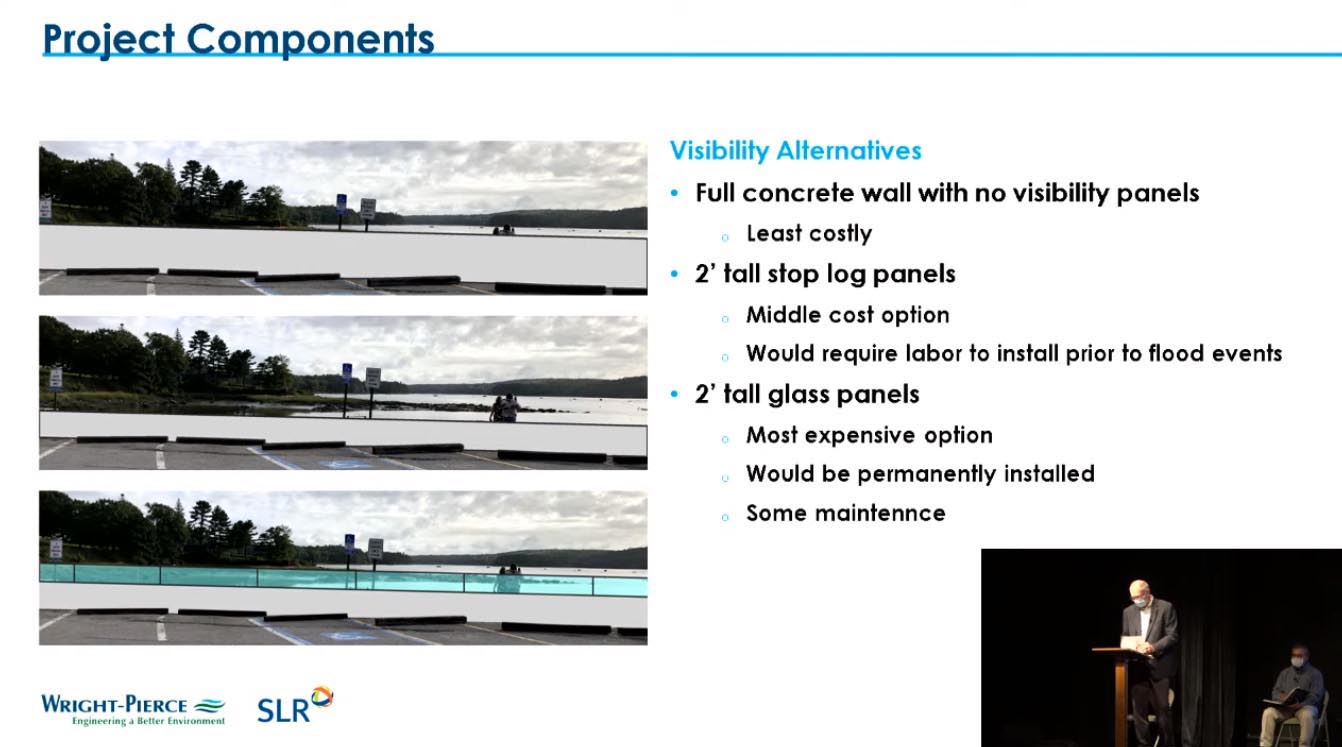 A rendering shows the projected impact in the downtown Damariscotta municipal parking lot of a five-foot concrete flood wall (at top), a three-foot wall (middle), and a three-foot wall with two-foot glass panels. Jan Wiegman, an engineer with Wright-Pierce (seen at bottom right) led a community conversation attended by 48 people on the 30% design plan for the waterfront improvement project at the Lincoln Theater on Tuesday, Sept. 28. (screenshot)

Wiegman said this would incur additional costs. Town Manager Matt Lutkus suggested holding a capital campaign if extra funds are needed and a recognition of the town’s history is something the public strongly desires to be included on the flood wall.

Frederick Lancaster, of Bath, apparently the only non-Damariscotta resident at the meeting, asked if the town considered converting the parking lot to a green space and setting up a parking lot on Route 1 to shuttle people into town as a better plan to combat climate change.

“There is a lot of federal money as we know, that we don’t need to rush into making quick decisions,” Lancaster said.

Lutkus explained that he and the waterfront committee have been working on the project for over nine years and explored some similar options, but decided the town needed the parking spaces.

Alan McKinnon, a member of the waterfront improvement committee, said when the committee first started its work, one of the options was simply to “vacate the downtown” because of effects associated with climate change.

Robert “Haas” Tobey, another member of the waterfront improvement committee, noted that the project and the grant funds that made it possible would not have happened without the hard work and commitment to the project of Town Manager Matt Lutkus.

The crowd then applauded.

“I was very pleased to see the turnout, I thought it went well, a good discussion, excellent points from the audience, excellent questions,” Lutkus said after the meeting. “I’m very proud to be a part of this project.”