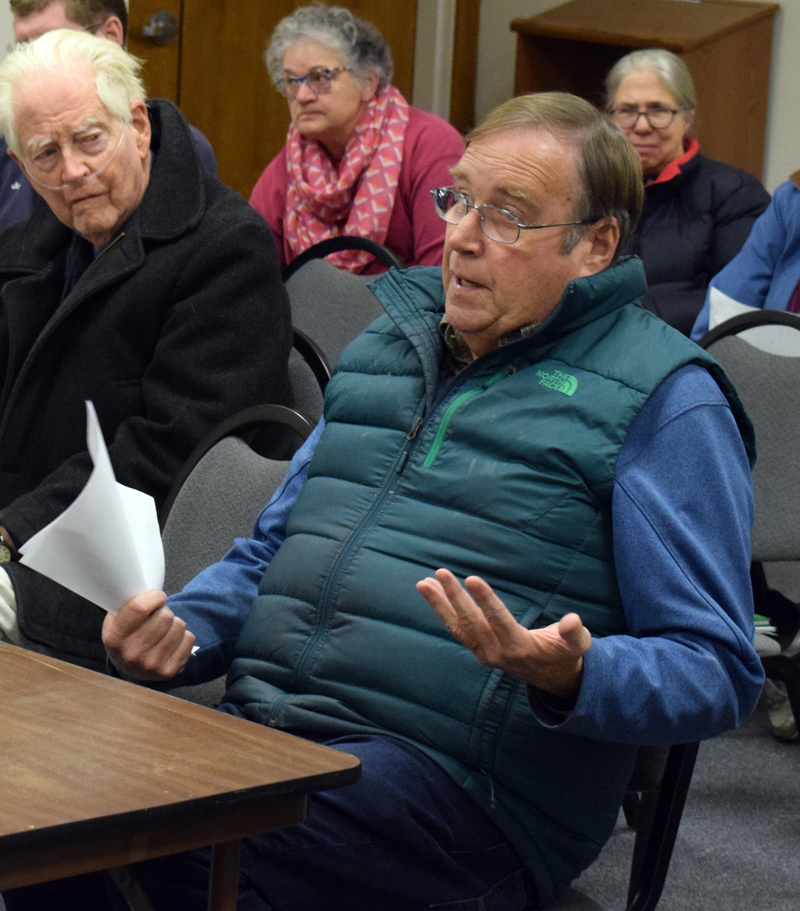 The Damariscotta Board of Selectmen approved a fee schedule for marijuana businesses modeled after the fees in Auburn, which has the highest fees in the state, Wednesday, Dec. 4.

The selectmen set the rates high to cover any unknown costs, as the town does not have an accurate estimate of its costs for the permitting process, including inspections and enforcement. The vote followed a public hearing on the fee schedule.

Selectman Josh Pinkham, during the selectmen’s meeting after the public hearing, said the town’s costs will likely be higher in the first year as town staff develop procedures for dealing with the businesses. He said the town may have attorney’s fees to ensure compliance and deal with potential appeals from applicants.

He said that after the first year, once the town has real data on its costs, it can adjust the fees to accurately reflect those costs.

State law concerning marijuana businesses says any charge for permits “must reasonably reflect the municipality’s costs associated with the license or permit procedure and enforcement.”

Board Chair Robin Mayer discussed her best guesses for associated costs, which she calculated on her own.

She estimated that the town’s costs to process 25 applications would total $21,250. Her estimated took into account the time of the code enforcement officer, fire chief, and police chief.

The estimate does not include more time for the town manager, attorney’s fees, or costs of enforcement, however.

Mayer calculated the revenue from 22 marijuana businesses to be $59,500, using the fee schedule approved by the selectmen.

She said in a follow-up email that she voted for the fee schedule because she anticipates higher costs in the first year due to a learning curve and legal fees for possible appeals to the town’s lottery system.

Per town ordinances, if the town receives more applications than the number of licenses available in the 30 days after it receives its first application, a lottery clause will kick in to ensure fair consideration for all applicants.

The lottery will determine which applicant will receive the first opportunity for a public hearing.

The town is drafting an application for commercial marijuana establishments modeled after the state’s application, which was made available Thursday, Dec. 6.

Some of the comments during the public hearing were critical of the fees as too high. 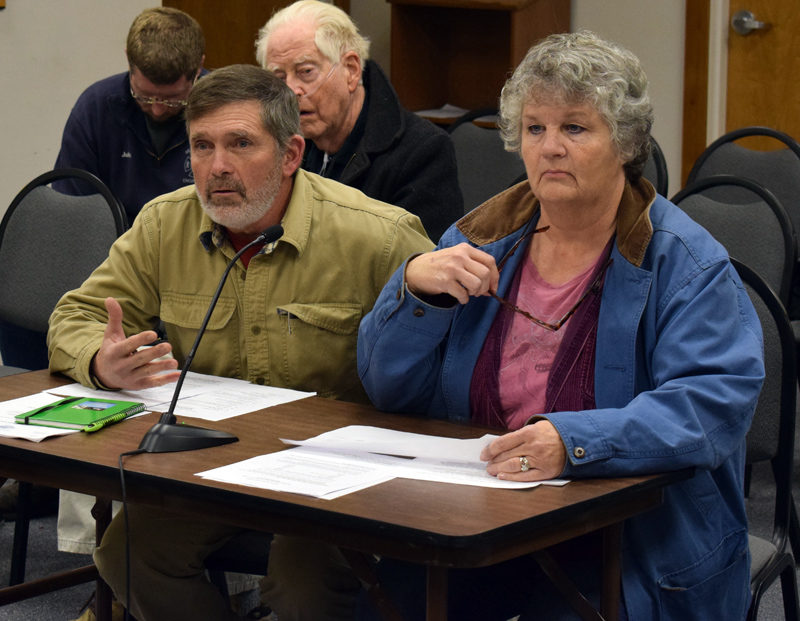 Buzz Pinkham, a medical marijuana caregiver, and Vicki Pinkham address the Damariscotta Board of Selectmen during a public hearing about permit fees for marijuana businesses Wednesday, Dec. 4. (Evan Houk photo)

Vicki Pinkham passed out an informational sheet with license fees from towns similar in size to Damariscotta. She said neither Boothbay nor Woolwich charge fees for medical retail stores.

Buzz Pinkham asked if the town charges other businesses to open.

“It allows them to, but you don’t have to,” Vicki Pinkham said.

Town Manager Matt Lutkus said the town plans to add more fees for other businesses, including those that serve alcohol, to recoup its costs for licensing and permitting. He said the town could be charging a number of fees that it currently doesn’t.

“The state law says it’s not a revenue-generating activity. It is to cover our basic costs, so it doesn’t add a burden to the town,” Mayer said of marijuana-related fees.

Mayer said costs could include training for police officers and the possible purchase of a “sniffer” tool to deal with complaints about marijuana odors.

The sniffer, or field olfactometer, would measure the level of odors and help determine how much is too much.

After the public hearing, Mayer said the town would need to set an acceptable limit for odors.

Nobleboro resident Mark Ferrero, co-owner of Greenport Cannabis Co. in downtown Damariscotta, said his business has not resulted in any additional costs for the town in over one year of operation.

Police Chief Jason Warlick confirmed this during his comments. 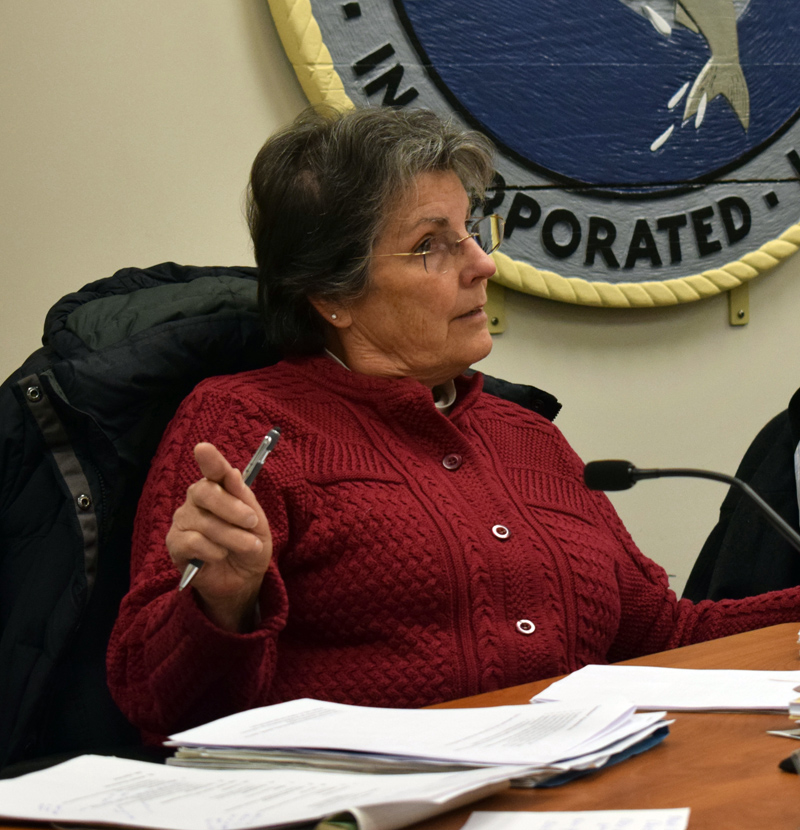 Under the ordinance, two retail caregiver licenses will be available. Greenport will get one, because the store was in operation prior to Dec. 13, 2018, when the state’s opt-in clause for municipalities took effect. The company also has a state-issued medical marijuana retail license.

David Page, of Damariscotta, who said he has been a caregiver since marijuana first became legal in Maine, said he did not have a huge problem with the level of the fees. He said the adult use fee was a “little heavy.”

Damariscotta Fire Chief John Roberts said it is impossible to estimate the increase in costs for fire department responses related to marijuana, but he does believe costs will increase.

He said the fire department has been to three structure fires suspected to have resulted from marijuana grows this year. However, he is more worried about home growing operations, which are not inspected or regulated, than commercial growing operations.

Roberts mentioned one fire specifically that was confirmed to have started from a home growing operation in Damariscotta.

Likewise, Warlick said it is impossible to tell what the increase in costs for the police department will be once more marijuana businesses open, but he believes costs will increase.

Warlick said he would like to conduct the same robbery training he does at banks, since the all-cash businesses will likely have large amounts of cash on-site.

Since marijuana remains illegal at the federal level, most banks will not accept deposits from marijuana-related businesses.

He said the costs to inspect and assess applicants would be minimal, as the process would not take more than a few hours.